An Army bomb disposal team has been alerted to an ordnance find at Sandwich Bay today (March 5).

The Royal Logistic Corps Explosive Ordnance Disposal (EOD) team is on site and a 500 metre exclusion zone is in place.

Tony Ovenden, from the Thanet and Sandwich coastal finds group, was at the scene. He said: “They were digging them out the sand. They are piling it up and I think they will blow it up. 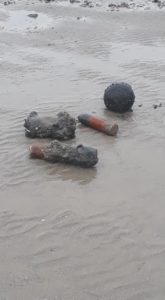 “They have an exclusion zone but the tide is coming in and nothing has happened. In the next few days there will be more discoveries as the sand levels have dropped and the tides will be going out further. Exactly the same thing happened four years ago.”

HM Coastguard Deal said: “After an extensive search of the area a total of seven items of ordinance of various sizes and structure were located.

“RLC Bomb Disposal Team were on scene and at approx 3pm carried out a controlled explosion to dispose of the items.”