A record-breaking day for visitors and takings marked the fifth anniversary of Ramsgate’s Petticoat Lane Emporium.

Some 200 independent traders have space at the site, selling everything from quirky herb pots to vintage clothing, hand crafted goods, jewellery and more.

Added to the mix is the Baker Street café and bar making sure punters and traders are fed and watered,

The celebration of the five year milestone brought more than 1,000 people through the doors, says Zak Tozer who is son of emporium co-founder and director Richard Tozer (pictured below). Richard is still at the helm although his former partner Kevin Shaw has now left the business. 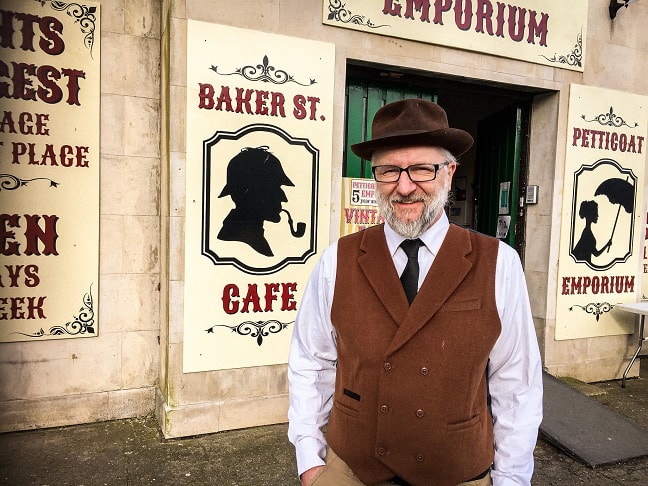 Among the fun were The Cupids from Looping the Loop, who bobbed their way through the crowd ‘sharing the love’, which included gifting people with little wooden engraved love tokens sealed in red envelopes.

Zak said: “We don’t have a people counter but we predicted that there must have easily been well over a thousand people through the doors that day with a knock-on effect for the following few days.

“From the moment we opened the doors at 10am people were flooding in and it was consistently busy with queues at the till and people dining in our Baker Street cafe bar until right to the end of the day at 5pm!

“We broke all of our records for takings at the till, including our opening weekend five years ago which was always our benchmark for the busiest we have ever been over a weekend.

“Both The Dulcettes and Metro Vipers were swinging and rocking the place with visitors stopping to watch, dance and sing along. Looping The Loop’s ‘Nearly Normal Theatre Company’ provided us with a trio of charming Cupids who bobbed their way around the premises.

“Regular visitor and World War Two collector, Gary brought his 1930s ‘blackout’ Austin along, which was parked in our loading bay all day. Our Baker Street Cafe Bar was heaving with visitors and our staff worked hard to keep up with the demand and serve everyone with minimal disruptions.”