The Thanet Trees group is calling for protesters to join them, dressed up as zombies, in a demonstration over development on land at Westwood Lodge, which they say will destroy wildlife on a nearby ‘plague pit’ site.

The group will hold the Plague on Westwood Village demonstration on Thursday (February 20)  at 12.30pm, at the Westwood Lodge gates.

Members want Thanet council to ask for a halt in works at the 153 house development site off Poorhole Lane, which is private land, so full ecology surveys can be completed, planning conditions can be approved and more information shared about the apparent Black Death burial pit.

A spokesperson added: “We believe precious habitat has been destroyed in advance of full planning permission without adequate ecology surveys to identify rare species of wildlife at risk. This housing estate was refused planning by Thanet District Council because of the destruction of essential woodland habitat but won at appeal because we have no Local Plan to curb the continued urbanisation of Thanet. We have just 4.4% tree canopy coverage in Thanet.

“It has been nearly five years since initial, basic, ecology surveys were carried out at this site.The new planning application, including an updated EMP (Environmental Management Plan) was published on February 13, well after clearance works had begun.”

The group say there are concerns for birds, bats, slow worms and reptiles that could inhabit the development site. Pipistrelle bats were found to be present during surveys in 2015. Protesters say the site also offers potential habitat for badgers, dormice and hedgehogs.

The Environmental Management Plan submitted by the developer to Thanet council this month, says new wildlife surveys are required as there is potential “for protected species to be present.”

Outline planning permission for the development was granted, by appeal, in 2017. The original application in 2015 was rejected by Thanet council for reasons including concern at additional pressure on Sandwich Bay protection area and: “The proposed development would result in a significant incursion of the built form into the green wedge, which would reduce the separation between settlements and result in a substantial loss of openness and established woodland habitat.”

However, the Planning Inspectorate decision states Thanet council’s case was weakened by a lack of a 5 year housing supply plan. On the issue of green wedge the inspector found: “further loss of trees within the site, and the introduction of additional dwellings, would be partially visible. However, as the woodland visible along the northern and eastern site boundaries would be largely retained its distinctive landscape qualities would not be prejudiced.”

Reserved matters planning documents submitted by applicant Places For People Homes Ltd this month say trees on the south of the site and east and north boundaries will be protected and new street trees planted. 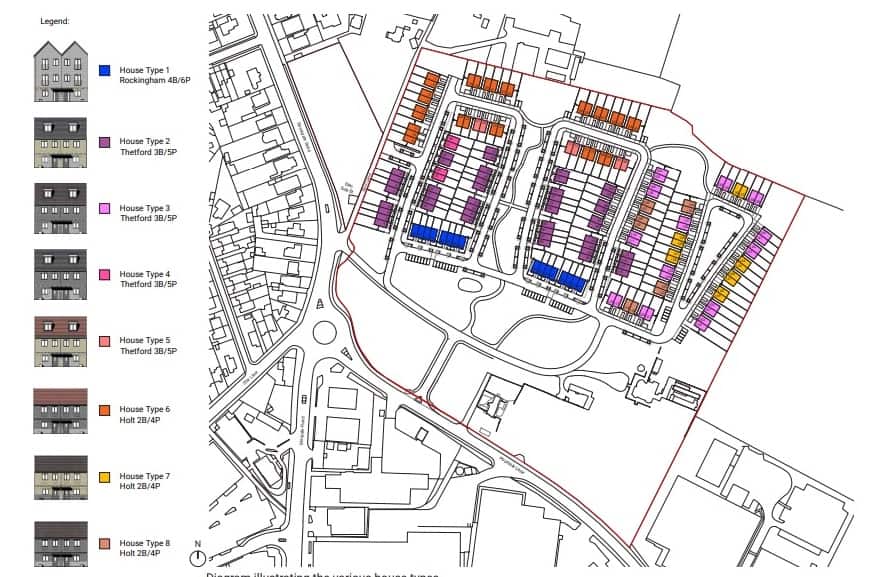 The design document states large specimens and small groups of TPO trees will be incorporated into the development of  69 shared ownership houses and 84 affordable rent houses. The houses will be ‘modular,’ meaning they will be built off site and then craned in.

The scheme proposes 16 four-bed, 82 three-bed and 55 two-bed homes plus 243 car parking spaces with 31 visitor spaces including 10% with electric charging points.

There are proposals for a new road network and access from the south, off Poorhole Lane.

Referring to the ‘plague pit’ the document states: “There is some speculation that the origin of the place name Poor Hole, derives from the burial of paupers and plague victims and that the reason the original route of Poorhole Lane diverted north then west was to avoid such a pit.

“This possibility was considered in some detail in the archaeological desk-based assessment and it concluded that the evidence for this was not compelling. It suggested that it was equally likely that the name was derived from a local family name and a local hollow formed from quarrying activity, which was widespread in the area.

“Sources from the 18th and early 19th centuries were reviewed, and they make no reference to such a feature, and suggested that if such a pit were present or even rumoured at the time, these sources would have been expected to mention them. As such it is considered that the potential for this feature to be present is low, based on current evidence.”

Contractors have carried out ground surveys and there is an archaeological dig taking place but no ‘burial’ evidence has surfaced.

The Thanet Trees group is also querying possible ground water pollutants at the site from a Sericol leak of cyclohexanone into the chalk and groundwater which was discovered in 1994. The leak is said to have come from buried pipes and/or tanks.

Remedial works removed some 470 tonnes of solvent from the chalk aquifer but the volume of the spill is not known.

The reserved matters application can be found on the Thanet council planning portal ref R/TH/20/0174.