Plans to build a block of 18 flats with underground parking at the former Westonville Garage site in  Canterbury Road, Westbrook, will be discussed at Thanet council this month.

The proposal for the part 4-storey, part 5-storey building, with car access from Westbrook Gardens, was submitted by Sapphire Developments Kent Ltd last June. The plans have since undergone some modifications.

Guy Hollaway architects have produced design plans for the build. The firm has previously drawn up plans for Fort Road Hotel, the multi-coloured 120-bed hotel proposed for Hosers Corner, a 60-bed ‘destination’ hotel and restaurant with multi-coloured shutters on the seafront at the Rendezvous site by Turner Contemporary which did not come to fruition and designs for Project MotorHouse proposals for the West Cliff Hall in Ramsgate which has since been sold to a private buyer.

The site, on the corner of Westbrook Gardens and Canterbury Road. was used as a Kwik Fit garage but has been unused and overgrown for the last 15 years, with hoarding enclosing the site. 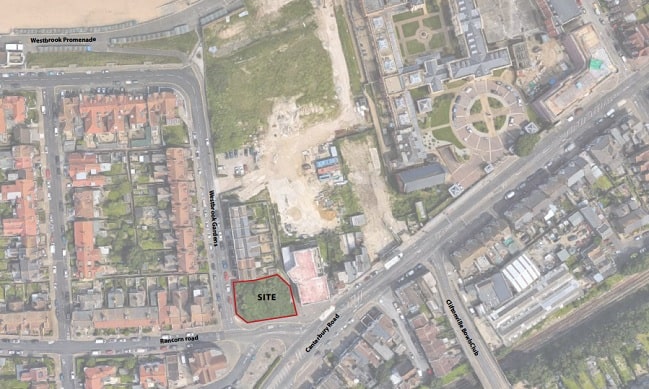 Three letters of objection have been received by Thanet council raising concerns: of  loss of light and privacy,  height, highway safety resulting from the additional vehicles on the roads and noise and disturbance.

Following comments from Kent Highways the applicants have removed a proposed vehicle lift and created ramp access to the basement parking instead.

KCC Archaeology  has also asked that a condition of archaeological works is attached to any planning consent.

The comment says: “ Extensive archaeological remains are recorded in the Westgate area. The sites of two iron age and Romano-British settlements are known within a 500m radius of the premises, one at Hartsdown park and one close to the nearby Royal Esplanade.

“Cropmarks of enclosures are also known directly south of the site. The general potential of the area relates principally to Bronze Age, Iron Age and Roman remains found along the coastline to the west and expected to continue in towards Margate.

“Recent investigations in close proximity to the present site have revealed remains of prehistoric date. While the site has seen previous development it is not known the extent to which the land below that development was previously disturbed and the present proposal involves substantial excavations including for a basement level. It is possible that archaeological remains will be disturbed by groundworks involved in development. “

Thanet council’s contaminated land officer also advises investigation is undertaken due to the former vehicle repair use at the site.

The application is linked to an allocated housing site in Cliftonville at the  former St Georges Hotel in Eastern Esplanade, which has planning permission for 87 flats. A legal agreement for the St Georges site says the Canterbury Road application would serve as the off-site affordable housing provision for that development,

If agreed the developer will be liable for contributions of:

The planning officer’s report to councillors says: “The site is considered to be non-previously developed land, given the time that has passed since the previous use, and the current condition of the land, which is now overgrown.

“The proposed development is therefore considered to be contrary to Policy H1 of the Thanet Local Plan; however this policy currently has minimal weight in determination due to the council’s current housing land provision.

“The proposed development would provide an additional 18 flats towards the current housing need, which will provide a social benefit. It is also expected that all of these units would be provided as affordable units, if constructed in conjunction with the former St Georges Hotel development site, which further enhances this social benefit.

“Economic benefits will be achieved through the construction of the development, and the occupation of a currently vacant boarded up site. With regards to the environment, the retention of the site as open space is not considered to be necessary, as the site does not offer recreational benefits, and is not intrinsically valuable to the area.

“Overall the proposal is considered to enhance the character and appearance of the area.”

The recommendation for councillors due to attend the planning committee meeting on February 19 is that they  defer and delegate the application for approval to planning officers.