In 1999 Aram Rawf was a terrified 17-year-old fleeing Iraq in the back of a lorry. He had been taken to a mountain camp in  northern Iraq – previously Kurdistan – and tortured by extremists after he refused to train as a suicide bomber.

A ruse by his older sister saw him taken to hospital and then on to his escape.

Twenty years later Aram is a British citizen, a councillor, a volunteer and a campaigner.

The 38-year-old, who lives and works in Broadstairs, said: “When I grew up we had the Iraq/Iran war. We would spend a lot of time in air shelters, going to school between bombings. All the windows were sandbagged while you sat in class and then you would take your homework to the shelter. It was like a picnic, your friends, neighbours, teachers were all there and would be cooking.

“All we knew was the boom of the bombs, you got used to it.”

The Iraq/Iran war ended in 1988 but thousands of Kurdish people were killed in a poison gas attack by the Iraqi regime. In 1991 there were hundreds of thousands more killed during a failed Kurdish rising, Saddam Hussein then imposed a blockade on the Kurdish controlled area of northern Iraq. Faction groups became embroiled in civil war with one side receiving backing from Hussein’s troops.

In this atmosphere of conflict Aram was kidnapped and tortured by fundamentalists for two months.

He said: “The group controlled the whole mountain area. I don’t know if my dad was involved or forced, many people had no choice.

“One day I came home from school and he had friends who he said wanted to talk to me. We took a car trip to the mountain where the Kurdish government had no control and then my dad had to leave.

“I spent two months in an underground cell. I was tortured, they did not give me much food. I was weak and had lots of injuries. Every morning they would  say ‘will you take part in the training (to be a suicide bomber)?’ and I would say no.”

Aram says his refusal was due to his sister who had introduced him to many books where he learnt about the wider world. An unusually independent woman she had also taken him to public meetings where philosophy and world issues were discussed.

He said: “Going to meetings made me open my mind. There were many things, forced marriage, daughters not receiving education, that I did not agree with.”

Aram’s sister was allowed to visit him and told him to agree with whatever they asked, saying: “Agree and you will be free.”

Aram said: “I could not believe what she was asking but trusted her. The next day I said I would train.”

Aram was then taken to hospital where he stayed for two weeks. Then his sister visited and took him into the garden. A car was waiting and this took Aram over the mountains to Iran, then Turkey and then finally in the back of a lorry to the UK.

He said: “I was in the lorry seven days and then I was let out on a motorway. I did not know what to do so just started walking and was picked up by police and taken to Dover.”

Aram, who spoke Kurdish, Arabic and Farsi, was interviewed with a translator and then taken to a B&B.

The following day he was given £9 and a map and told to get the bus to Margate. Once dropped off he bumped into a group of Afghan people who took him to a hotel. He was given a room but no food. Eventually there were Co-op vouchers but still no way to cook food.

Aram, who had picked up an Arabic/English dictionary to try and learn the language, says some things – like hot dogs that were not hot and, as he found out five years later, were not dogs – were baffling.

Despite the challenges Aram secured himself a place at college learning English, IT and life skills. He found a room with a kitchen after two months with no hot meals, although his mix up of the words kitchen and chicken caused some confusion. It was this move where he met the lady he now calls his ‘English mum.’

In 2002 Aram started working with Migrant Helpline as a translator and was volunteering at a social group in Cliftonville.

But in 2005 his application for asylum was turned down by the Home Office. He was told Iraq needed people like him to help rebuild it.

Aram was eventually detained and told he was being sent back despite his fear that he would be murdered as his uncle and family had been.

Aram said: “After I was released from immigration detention in 2006 I joined St John Ambulance as a volunteer. By saving lives I wanted to say thank you to the community that saved me from deportation.”

In 2008 Aram was granted indefinite leave to remain in the UK following one of the longest asylum cases to ever run in the country and in 2011 he became a British citizen. 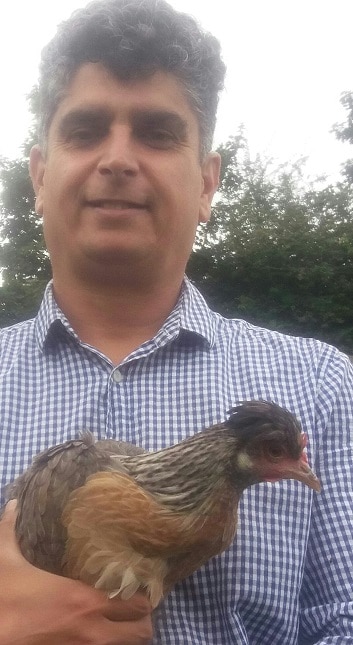 He says his life is thanks to the sister he has not seen since that day at the hospital in Iraq, adding: “I hope she is alive, I hope she got out.”

Last year Aram was elected as a Thanet district and Broadstairs town councillor. He continues to volunteer and works as a supervisor at the Royal Albion Hotel in Broadstairs.

He said: “I just want to do my best to live like an ordinary person and to contribute to the community. If we all do one thing for the community we can make lives better.

“To make even  one person happy is our biggest achievement.”