Broadstairs dad-of-four Marc Walsh was in a dark place when he came to Thanet Winter Shelter in 2017 after being homeless for six months.

But after receiving its help, the 47-year-old has turned his life around – and is now back there as an outreach worker to help others going through what he has experienced.

Marc said: “I had split up from my wife, was using drugs and drinking to stop how I was feeling and had not seen my kids for about 10 months.

“I had got into a really bad place. Then the shelter came up and I managed to get in and worked with different people. I was the last person to get housed that year, just two days before the shelter ended.”

Now in its fourth year, Thanet Winter Shelter runs between November and the end of March to provide beds, food and services to those sleeping rough on the isle.

Since 2018, referrals have been made by Thanet Rise (Rough sleeper Intervention, Support and Empowerment), who then act as the lynchpin for helping people access a host of other services to get them back on their feet.

Reflecting on his time at the shelter, Marc said: “It was different from now with Rise and all the services.

“I was in a bedsit in Cliftonville but had no support. I got really low and wanted to die.

“I gave someone at Aspire (homelessness service) a letter for my wife asking for help. She took me to the Forward Trust where I saw my old probation officer. He got me into detox and then I went to rehab.

“I had always used drugs, from about the age of 13, but I managed to have a job and tried to live a proper life. I didn’t like the way I felt so I would use something to make me feel better. It became the problem but it wasn’t the cause, that was down to childhood trauma.

“Once I came off everything then I had to deal with that trauma. I know myself inside out now. I’ve been clean for one year and I am back with my wife.”

This year Marc turned up at the shelter as a volunteer and that same week was offered employment on the team.

He said: “This year I have looked after 20 people on my own. I have sat and talked to people. I look across and think ‘I slept on that bed’.

“I get on well with people and they know I have been there, I don’t hide anything. I love what I am doing and I feel lucky.”

The shelter and the RISE team

The shelter provides at least 20 bed spaces, plus five emergency ones, nightly, as well a hot evening meal and breakfast the next morning. It runs across eight venues in Margate and Ramsgate and receives support from the Salvation Army, Thanet council, The Gap Project in Broadstairs and isle churches.

Funding for the project costs around £65,000 each year. Thanet council gives £20,000, with a further £10,000 grant from the Ministry of Housing, Communities and Local Government. The rest has to be made up from donations.

In the latest round of the scheme, the rotating venues the shelter uses have hosted an average of 14 guests per night. But some nights have seen up to 23 people.

Twelve clients have already been housed since November thanks to the services of Rise. The team go out on to the streets to find and offer support to those sleeping rough.

Rise outreach worker Kat Howe said: “We are trying to empower people to do as much for themselves as possible, we are just the stepping stone for that.

“We are there to support clients throughout the day. We do street checks in the morning, at night, at weekends, and we are the first point of call for people.

“We invite them to a risk and needs assessment and they may then meet other colleagues from the Forward Trust or Citizens Advice. We get to know them a bit better and design a support

plan with them at the centre of it, so they can move forward with key actions.”

Colleague Ish Jammeh adds that combining all the services makes it easier for people to gain the help they need to get off, and stay off, the streets.

He said: “Homelessness can happen to any of us, it could be a relationship breakdown and then turning to drink or drugs which gets out of hand. One blip in life can change everything.”

But rough sleeping project manager Jess Bailey says not everyone wants the help offered – although the team never gives up.

She added: “Some people we have offered help five or six times and we just keep trying. It is a challenge if someone doesn’t want to engage.

“But there are a lot more options now and a lot of support available. There is no reason why anyone should be on the street if they want the help.” 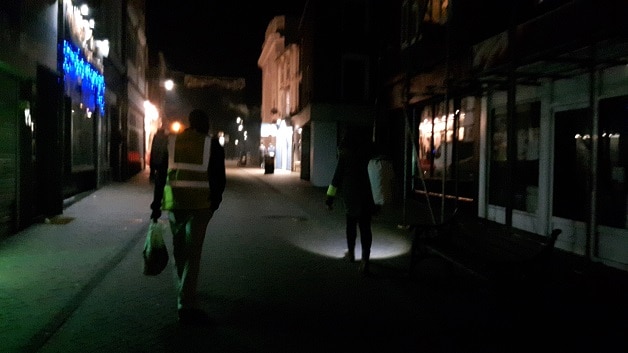 I join the team on one of its evening trips to find homeless people on the streets. On this particular search down Margate alleyways and along the seafront, there are no rough sleepers out.

“It is too early,” according to Ish. “Between 3am and 4am is the usual time for seeing people, especially over in Ramsgate because of the night-time economy.”

Undeterred, the team will be out again in the early hours, at the daytime drop in sessions, across the weekend, to make sure people are offered help.

Ish said: “I get a real buzz out of someone getting a positive move. It might be someone who has been taking drugs, drinking, who had lost hope completely and then they turn it around.

“They get accommodation and a job and they have their life back. To me, that is priceless and it is what keeps you going.”

The Rise team, headed by Danilo Luongo, was launched on October 10, 2018 – World  Homelessness Day – but has been in operation since August of that year.

Rise knits together all the services people might need, from alcohol, addiction and mental health support to advice on benefits, assistance getting a GP or a bank account and a pathway for getting into, and staying in, accommodation.

Since it began, the project has supported 89 people into substantive accommodation, helped 231 into emergency accommodation and has an 86 per cent tenancy sustainment success rate.

One message rough sleeping project manager Jess Bailey is keen to get out is for people not to give money to those begging on the street.

She said: “There are people in treatment who have daily meetings to reduce their alcohol intake. Someone gives them £20 and everything is undone. Then they are demotivated and that can set them back months.

There are so many services, and free meals, available that people really do not need to be given money for food.

“It is better to donate to charities or give food and clothing to schemes. This encourages people to engage with us.”

Charlie, 42, from Ramsgate, has been a volunteer and then a supervisor ever since the scheme was launched. She says the involvement of Rise since 2018 has made the project an even greater help with better linking of services.

The mum-of-one said: “This year has been really good, especially with the Rise team onboard and John from the Forward Trust and mental health support from Jane. They come in and talk to clients if they have missed an appointment, the outreach is really good and it helps that we get to know them and so have that extra information.

“We have around 16-18 guests a night, some are women and so we have sectioned off a bed area for them. Some nights we might have up to 25 with the emergency beds.

“Some people don’t really want the help but others are really switched on and want it. The team at St John’s is great too, they provide the food and have donations including from Ash Farm and Smiths Court Hotel.”

Mum-of-three Michelle added: “This is my third year and the second as a supervisor. Charlie got me involved as we have been friends for about 40 years.

“Marc was here my first year and to see the end result, what can be achieved, is amazing. Some people are really thankful and it is so rewarding to help them.”