Two years ago Broadstairs forklift driver Martin Cooper struggled to the end of a marathon run and vowed never to do it again.

This year the dad-of-two is doing not one but two marathon races in the space of three weeks to raise cash for support and research charity Tourettes Action.

The fresh challenge comes after son Aiden was diagnosed at the age of 10 with Tourette Syndrome last August.

The sports-loving youngster, now 11, lives with involuntary movements and sounds. The Newington pupil will sometimes shout random words – although not the stereotype of swear words – and can suffer tics.

Martin says he and wife Natasha knew little about the condition until they, and Aiden, researched it.

The 36-year-old said: “ We didn’t know much about it other than the stereotypes in the media of kids swearing which Aiden doesn’t do. There wasn’t a lot of information from the NHS so we looked it up and found Tourettes Action, which helped us a lot to understand.

“Aiden’s teacher asked for a presentation to help explain things and raise awareness at school. Aiden did all the research himself for the presentation.

“He also has action cards with all his tics on them so if they were to get a cover teacher he can just give them the card.”

Tourette Syndrome is an inherited, neurological condition, the key features of which are tics, involuntary and uncontrollable sounds and movements.

It is estimated that Tourette’s affects one school child in every 100 and more than 300,000 children and adults in the UK live with the condition. It is more common in boys.

It is thought that approximately half of children with a TS diagnosis will see a significant reduction in their symptoms as they approach adulthood. For some people, living with TS will continue throughout their life, but symptoms are likely to wax and wane.

Although the condition can involve involuntary swearing this is only experienced by a minority of people living with the condition.

The cause of Tourette’s is not fully known but is thought to be a combination of  imbalance in the function of brain neurotransmitters and genetic and environmental factors.

Martin said: “Aiden knows when something is going to happen and most times at school if he needs to he can resist it. But that means when he comes home he is bouncing off the walls, like a tic explosion.” 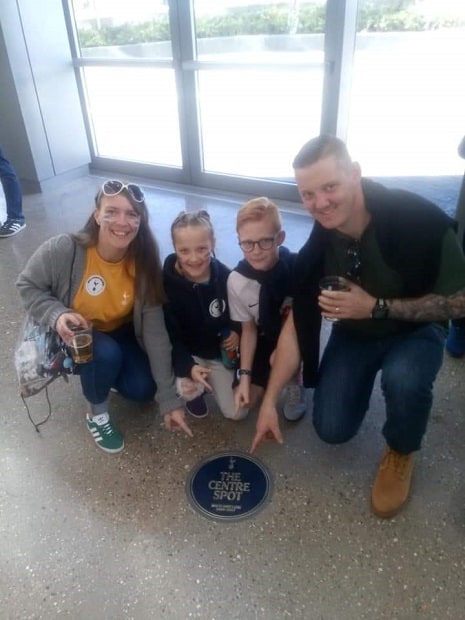 Like many other lads Aiden loves sports. He currently plays football with Thanet Colts and is hoping to take up cricket this year.

To help the work of Tourettes Action, Martin is now in training to run the 26 mile marathons in Manchester on April 5 and London on April 26.

He said: “I run four times a week, increasing distance  so I am up to 13 miles now. I wanted to run for Tourettes Action as they are a small charity, there are just seven people running for them in the London marathon, so people don’t always think of them for funding. Obviously it is important to me and my family.”

Martin currently has a £500 target and says all money, regardless of what is raised, will go to the charity.