Armed with 720 tins of chicken soup to sell at 50p for 24, Sharon Goodyer of the Summer Kitchen and a Duke of Edinburgh volunteer arrived in  a Clifonnville street expecting to dish them out and then leave.

But a surprise was in store for the 69-year-old who heads up the free family meals scheme on the isle each Summer.

She was presented with a gift from a mysterious resident known only as ‘Rabbit.’

She said: “I was standing at the end of Athlestan Road at 6pm with my Duke of Edinburgh young male volunteer and 720 tins of chicken soup that we were selling at 24 tins for 50p.

“As you can imagine there were quite a few takers and we were standing chatting to our customers to get to know their situation a bit better when suddenly a woman pushed her way towards me and said ‘I have been asked to give you this.’

“She held out an envelope in a plastic bag. We all moved to stand under a street light and in complete silence I pulled the envelope out and several people said almost in awe. ‘it has your name on it’

“I opened it and a few people started to say with excitement ‘is it Rabbit?’ ‘there hasn’t been one for ages’  I had no idea what was going on.

“When I opened the card it was full of wonderful things written about me, our kitchen and summer kitchen, and signed by people I do not know.” 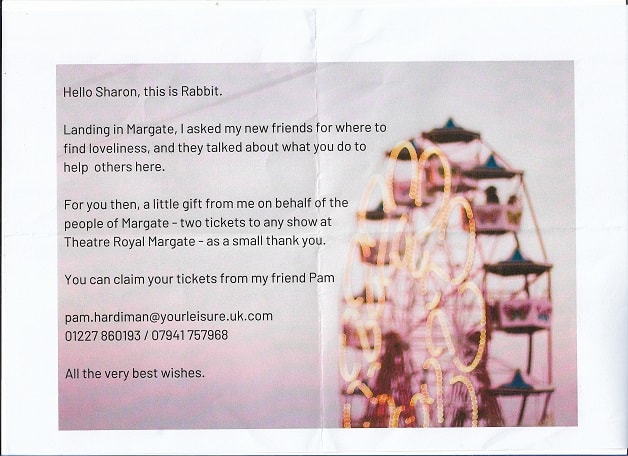 Also enclosed was a letter from ‘Rabbit’ with a gift of two tickets for the Theatre Royal.

The letter said: “Landing in Margate, I asked my friends where I could find lovliness and they talked about what you do to help others. For you then, a little gift from e on behalf of the people of Margate.”

Sharon said: “As far as random acts of kindness go this one takes some beating!”

The identity of Rabbit remains a mystery.