An exhibition of art work by the late Paul Mullen will be held at Quex Barn in Birchington this month.

Animals of the Serengeti Mara is a collection of an original adaption of decoupage and depicts African wildlife.

Paul lived in Tanzania for more than 40 years, from the age of seven, before returning to Thanet with his family in 1988.

At a young age he joined the Donovan Maule Theatre in Nairobi and was involved in both acting and painting elaborate theatrical sets, as well as making props.

He also exhibited his models and in 1956  was commissioned by the East African Tobacco Company to make a clipper ship model. Other creations included paper sculptures, matchstick models and an Eiffel Tower with working lifts. 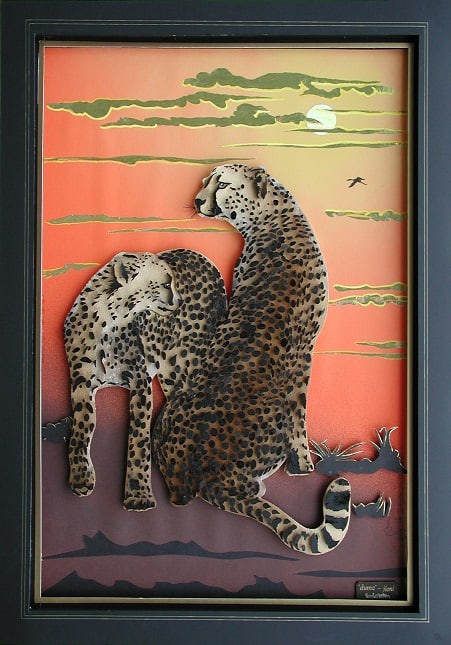 When he returned to the UK with his family, moving to Cliftonville, Paul starting creating work in 3D featuring African wildlife and people.

Paul was married for almost 40 years to Sharon, had two daughters, four grandchildren and a great-grandchild. He passed away in 2006.

Sharon said: “His pictures are mostly in a new, original style developed by him and are an ‘advanced’ type of decoupage, though not decoupage.

“His work is mostly pictures of African animals as Paul went to East Africa when only seven years old and left at the end of 1988. Paul loved Africa, its people and its animals.

“Sadly, Paul longed to go back to Tanzania where we met, courted, married and had our two daughters. As he was told his work permit would not be renewed, we moved to England but Paul could not settle here due to missing and longing for Africa.

“He developed cancer and lost his fight in June 2006. During his last five or six years he became more and more depressed but turned to art to ‘take him back to Africa’. These beautiful pictures are all we really have left of him. In an amazing way they remind all of us of a very happy life in a faraway place.”

The exhibition opens on January 28 and runs until March 2.

Quex barn is in Quex View Road, Birchington. Opening hours are Monday – Sunday, 9am to 5pm with Friday and Saturday evening dining hours from 6pm-9pm.