More than 80 years ago traumatised children from the Basque country arrived in Margate following the outbreak of the Spanish Civil War.

Now a charity formed to record and share their memories is looking to educate schools and community groups across the isle about this important era of history.

The plight of 4,000 refugees arriving on the boat named Havana in 1937, is often overlooked as the British Government initially refused to accept the children claiming anti-interventionist policy.

But after a fierce backlash politicians performed a u-turn and the youngsters, together with teachers and Catholic priests, were placed in homes – named colonies – across the country.

Margate played an important role in providing shelter for the children with the Laleham Gap School, and East Cliff House on Northdown Road offering sanctuary.

Carmen Kilner is a trustee of The Association for the UK Basque Children  (BCA’37 UK) as her father Eduardo Sanchez taught children at both Thanet colonies after arriving in Britain.

She explained: “My father was already in England as he became ill while studying at Madrid University in 1936. He contracted rheumatic fever and due to the political situation and living in hard conditions he moved to Ealing as his older brother was already based there.

“Franco had staged a coup and by that time my father had caught the last train out of Spain. It took three days for him to reach England.” 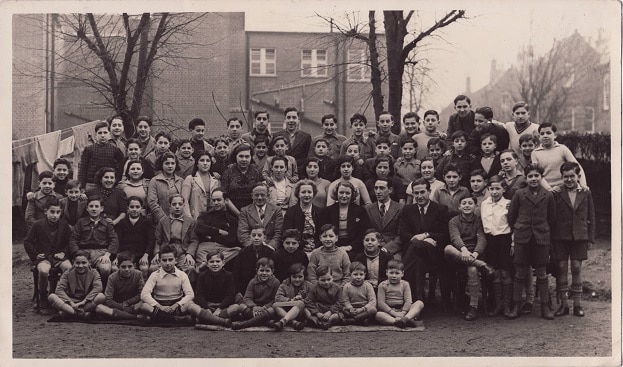 Eduardo recovered and spent a year learning English. Upon hearing refugee children were leaving Spain for England he offered help.

The 24-year-old’s background in engineering was also very welcome and he arrived at the East Cliff House in Northdown Road to teach mainly teenage boys.

At this time a nine-year-old Carmen Learra arrived in Margate. She remembered being well looked after at Laleham with kind hearted people paying for food and clothing.

She said: “We were really happy there. We  were getting used to life in England. The sisters (benefactors) paid for our clothes and school.  I liked everything, especially gym. There was a gymnasium which I later came back to see with my husband. In the bedroom there were 12 beds, two rows of six. I used to read to the girls, we also had parties and sack races.”

As the Second World War broke out finances dwindled and the once happy home soon began to break down.

Trustee Carmen Kilner says there were reports of the Laleham Gap children picking up wood on the beach to make fires and that a lack of supervision caused discord. “They sent my father to try and sort it but it didn’t work although the East Cliff colony was kept well run.”

The Association was set up by the children of refugees – most of whom returned to Spain with just 250 remaining in Britain, including Eduardo.

Carmen added:“Our objective now is really to educate people about the Basque children. It was a hostile environment with the Government not providing any financial assistance,  but there were many kind people, groups and companies – Cadbury’s provided chocolate on their arrival and communities stepped in.”

To arrange for the charity to  give a talk or to find out more visit basquechildren.org