The last of 120 Christmas hampers are being delivered to Thanet families in need today (December 19) following the amazing support of a fundraising bid by Hartsdown Academy head teacher Matt Tate.

Mr Tate launched his Tim’s Gift campaign this month with the aim of raising £1,000 to buy food and festive treats for families who are struggling below the breadline.

But amazing support from Thanet residents, businesses, organisations and people across the country helped the appeal bust through its initial target in just 24 hours. 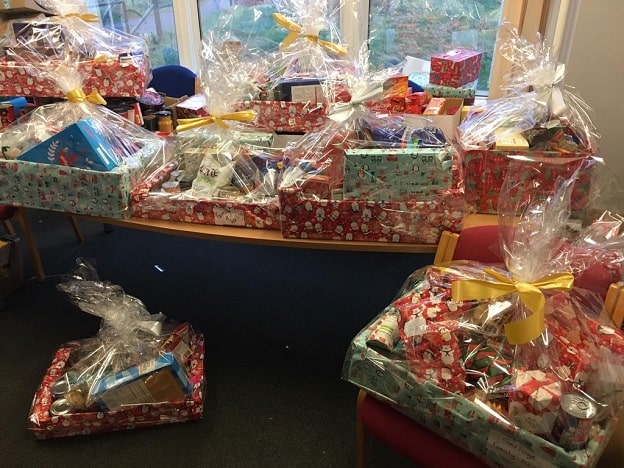 The final total was more than £5,000, providing enough cash for the 120 hampers. There were also donations including 100 £25 clothes vouchers from Global Generation Church, hand-knitted jumpers sent from Devon, presents, chocolate Santas and more.

The hampers have been distributed via primary schools including Cliftonville, Garlinge and Drapers Mills and through contacts from the Salvation Army.

The appeal came after Mr Tate spoke on LBC radio about the crushing poverty faced by many of his students and the efforts of staff to alleviate some of the problems.

He told radio presenter James O’Brien: “We wash children’s clothes, we feed kids breakfast, we take kids into hospital when we need to, we fight with social services, the police, other things when we need to. I’m not criticising those services, they’re as stretched as we are.

“Our view and my view is that education is a huge part of what we do, obviously, but actually, we have a responsibility to do the best for our kids.”

Some 20 school staff have volunteered their time to help with wrapping and delivery and Mr Tate has drafted in family help, including that of five-year-old daughter Ruby.

The dad-of-seven said: “We have been helped by lots of people with support from Heart FM, Gadds (food and drink),Global Generation Church and so many people in Thanet and nationwide donating to the justgiving appeal. There has been such generosity from staff, students and families and the wider public and donations from across the country including hand-knitted jumper sent from Devon.

“It really seems to have sparked people’s imaginations and there has been a phenomenal response and messages and emails of support for what the school is doing.”

Hampers including basic tinned and dried foods, cakes, sweets, gifts for children, the clothing vouchers and a £40 Tesco gift card for shopping.

Mr Tate said: “The voucher is to give people choice. Rather than us going out and buying £40 worth of food this lets people choose what they want to buy.”

And, after a two week school break, Mr Tate collecting for an even bigger campaign next year.

He said: “We will be starting again in January and want to help 200 families next year with support from all our local primaries. We are asking for people to send us any unwanted gifts so we can put them away for next Christmas.”