Regulars at The Laughing Barrel in Palm Bay have taken part in a Christmas charity walk raising money for Cardiac Risk in the Young (CRY).

The micropub in Summerfield Road, headed up by Michael McColl and partner Alison Jarvis, took on the challenge in memory of Fiona Tucker, a friend of Alison’s. 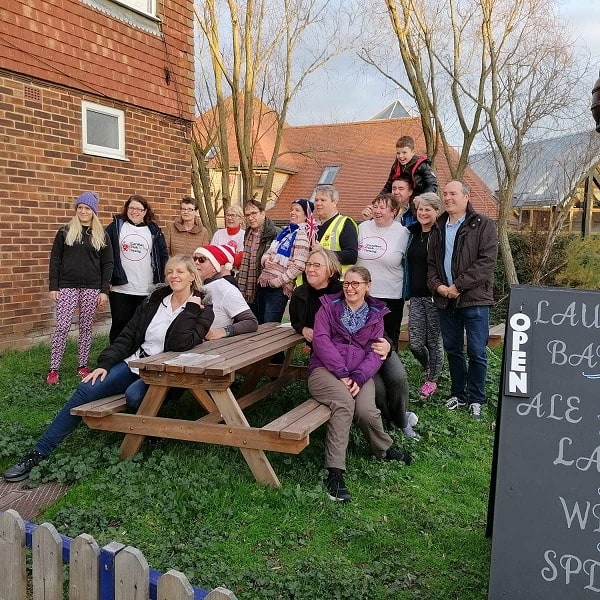 Newington Community Primary School let the 23 walkers borrow a minibus to get to Reculver. The fundraisers then walked 13 miles from Reculver back to The Laughing Barrel.

Sponsorship money is still being collected but so far more than £1000 has been raised. 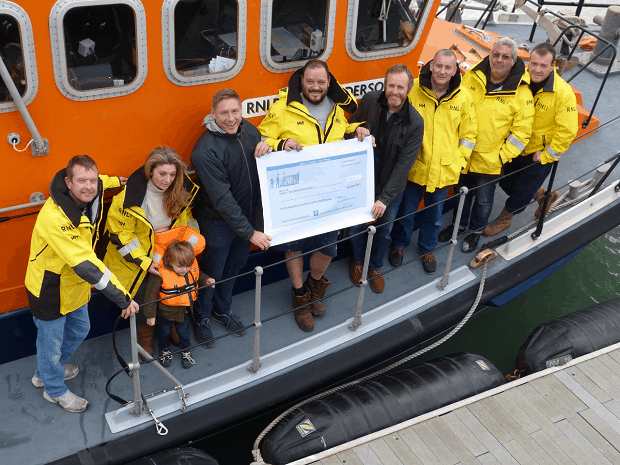 Ramsgate RNLI station were presented on Friday (December 13) with a cheque for £2000 from the Atlantic Avengers rowing duo John Wilson and Ricky Reina, both from Folkestone.

Back in February 2016 when Ricky was recovering from a knee operation, he could never have dreamed that he would one day row across the Atlantic. As part of his recuperation he was training on an indoor rowing machine at the gym, where he met John Wilson. John was a specialist in indoor rowing, and the pair hit it off. Between them they set a record for indoor rowing, four days non stop, then they decided to try rowing on water.

They bought themselves a 9 metre long, three quarter ton, two man canoe, a Rossiter Ocean II, called Sic Parvis Magna – Small but Mighty. This three year old canoe already had a pedigree as had been used to row the Atlantic and also around Britain.

The duo decided to take a year out of work to train for the crossing, moving from indoors to the Lakes at Lydd and then to Ramsgate Harbour where they would row for 5-6 hours at a  time out at sea. The reason for Ramsgate in particular, not their home port of Folkestone, was that the strong tides across the entrance to the harbour meant that they were able to train in challenging conditions. 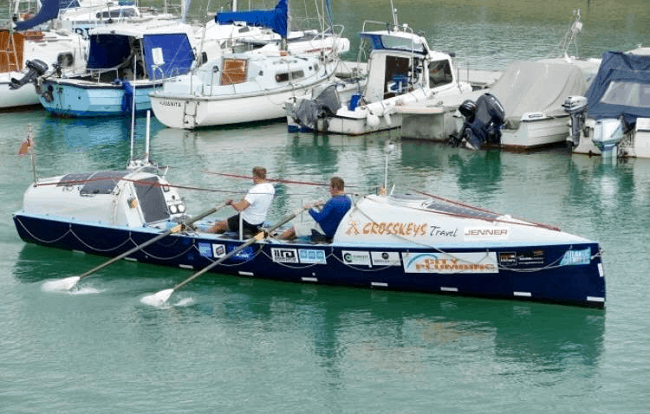 One day when they were out practising a member of the public raised the alarm, believing that kayakers were in difficulty. Ramsgate RNLI’s inshore lifeboat was launched to assist them but the volunteer crew realised as they approached who the rowers were and after a quick check and a wave returned back to base.

With little support, other than their families, the rowers approached Leven Brown, who is a British Ocean Racer holding five Guinness World Records. He was able to advise them how to prepare for the mammoth task ahead.
On November 27, 2018, they set off from Cadiz in Spain in fairly miserable conditions, and their journey down to the Canaries was wet and damp. Also the lack of sun meant that their solar panels for running their equipment didn’t work so for the first month it was back to basics using a compass and chart. They had 2 hour shifts at rowing, and their two hours off were spent trying to sleep, doing squats to keep their leg muscles working, and most importantly keeping clean, as sweat and salt can cause nasty sores. It took them two months to reach the halfway point!

Luckily for the first part of the trip they were very civilised with a glass of wine every evening with their rehydrated meal. However after that their store of 25 litres of red wine, 3 litres of rum and a few beers ran out. They did manage to catch and cook two fish whilst they were crossing which made a welcome change to their diet.

Christmas Day was celebrated by opening little parcels from their families and eating a few treats, and then they stopped rowing at 3pm to enjoy a few beers and watch the dolphins play in the water.

Not every day was so relaxing however, some days in bad weather they were unable to row, and at one point they spent four days locked in the very small cabin just off Tenerife riding out a storm. At this point they were “moonwalking” as they called it, which meant going Backwards! And once they were mid Atlantic they encountered nightly squalls, using when John was rowing! However they didn’t last very long. 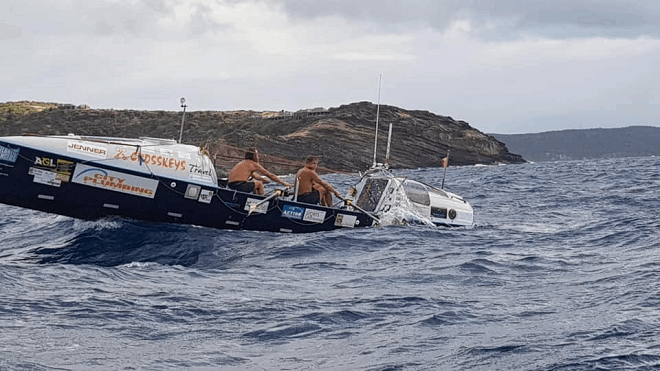 The last half of the journey was much smoother and completed in one month and they arrived in Falmouth Harbour, Antigua on 23 February 2019. Their families were there to meet them and this happened to be Ricky’s son Barney’s 8th birthday. Apparently he was not happy at all being woken up at 5am to meet his dad and said it was the worst day ever, however his tears of frustration soon changed to tears of joy when he saw his dad.

The two men were exhausted, and hungry for some proper food. Ricky managed to eat four cheeseburgers and chips for his first meal, but he deserved it as he had dropped from 109kg to 79kg during the journey. John, in a leaner position to start with still lost 5kg.

John now holds the Guinness World Record for the oldest man to row from Continental Europe to Antigua at the grand old age of 58. The pair hold the record for the first male pair to row from Continental Europe to Antigua a distance of approximately 4500 miles and the title they are most proud of is, despite all their hardships, they are the fastest out of any category of rowers to row across.

They raised over £40,000 sponsorship during their event and wanted to present RAMSGATE RNLI with a portion of it for all their support whilst they trained in Ramsgate. As Ricky said ‘ it was just great knowing that the RNLI were there in case things did go wrong’
They have now set up a trust where local sportsman can apply for grants, look them up under Atlantic Avengers on YouTube, Facebook and on AtlanticAvengers.com.

Our club’s Christmas party was held at The Walpole Bay Hotel, when members along with wives and partners tucked into traditional fayre.    In welcoming guests to the occasion, our President Clive Jackson made special mention of the widows of former members who attended.

Following  the lunch, Dave Webber in his inimitable style, led the carol singing.  It was rounded off with the chaos that always attends any rendition of Twelve Days of Christmas and guaranteed to get everyone in the festive mood.

In 1956 Crabb, an experienced Royal Navy frogman was diving in Portsmouth Harbour close to the Soviet vessel that had brought Russian leaders on a diplomatic visit.  He was never seen again. Rumours abounded that he was spying, and a body that was recovered a year later could not be positively identified as being Crabb using technology available at that time.

Since government papers on the mystery will not be revealed for 100 years it has allowed speculation to continue, with various books offering their theories. Given his many daring exploits, it is believed that he was the inspiration behind Ian Fleming’s great fictional hero, James Bond.

That meeting heralded the return to our club of John Chisman following a lengthy illness.  Welcome back John.   On a sad note, Bernard Brooks, a member of Probus for many years passed away recently. At the funeral, another long standing member, Tony Taylor, paid tribute on behalf of our club.

For further information about Probus contact our secretary, Brent Rimmington on 01843 589192 or email jandbrimmington@gmail.com

Caremark Thanet has recently appointed three new directors to its board. The company has been providing domiciliary care services to the residents of Thanet for over 7 years. During this time, it has developed an enviable reputation for the quality of the care it provides, the way it engages with its community and the career opportunities it creates.

Caremark Thanet was founded by Garry and Jayne Costain in 2012. Jayne said:“When we started Caremark Thanet, we had a number of goals. One of our goals was to create employment opportunities, and we have done this. So, I cannot tell you how pleased I am that three people have joined us and worked their way to the top of the organisation through their own talent and hard work.”

Xana joined Caremark Thanet in November 2016. Xana has quite a varied CV. She was a foster carer for six years – 2 years with Kent County Council and 4 years privately; before joining Caremark Thanet, she had worked in care for eleven years and has also worked as a bar manager. Xana initially joined Caremark Thanet as a supervisor. Xana is appointed to the post of Director of Education and Innovation. In addition to this, Xana has been appointed as
the Registered Manager for Caremark Dover.

Kerry joined Caremark Thanet in March 2017. Kerry brings vast care experience with her. She worked in both residential and domiciliary care for over 15 years as a care and support worker, supervisor and care co-ordinator. Kerry also spent short periods working in retail and hospitality. Kerry initially joined Caremark Thanet as a Care Co-ordinator. Kerry is appointed as the Director of Safeguarding and Compliance. In addition to this, Kerry has
been appointed as the Registered Manager for Caremark Thanet.

Jemma joined Caremark Thanet in October 2016. Jemma has an artistic background and gained a degree in Fine Art. She has run her own business, making and selling jewellery. Jemma also worked in education administration for a number of years. Jemma joined Caremark Thanet as the Business Development Manager. Jemma is appointed as the Director of Business Development and Marketing.

Garry Costain, the Managing Director of Caremark Thanet said:“ As an employer, I believe that I have a duty to create opportunities for people. However, opportunities, if they are worth anything, usually involve hard work. Kerry, Jemma and Xana have had a monumentally positive impact on the company. But this impact didn’t just happen. They made it happen. They bought into a vision; they work incredibly hard; they are talented and ambitious. They thoroughly deserve these important positions in the company.”

Caremark Thanet is an ambitious company. The company was consistently being asked to provide care in Dover, Deal, Sandwich and surrounding areas. For that reason, a new company, with the same team leading it, has been set up.

Jemma, Kerry and Xana have been appointed to directorships of this company as well. The final word goes to Jayne:
“Caremark Thanet and Caremark Dover have fantastic boards of directors and Senior Management Teams. I am absolutely confident that Dover will do what Thanet does so well: provide outstanding care, create fantastic opportunities and engage with the community.”