Last month marked 100 years since an AA patrolman, resplendent in full uniform, stepped out of a wooden hut near Aldermaston and filled up a member’s car with fuel pumped from a large drum at Britain’s first purpose-built petrol station.

That centenary and the multi-billion pound industry it spawned, is now celebrated in a new illustrated book by East Kent author Nick Evans.

Nick has also produced a number of local history books, including the story of Margate’s Dreamland amusement park.

He will be launching new book – Fuelling The Motoring Age – at The Shell Grotto, on Friday, December 6.. 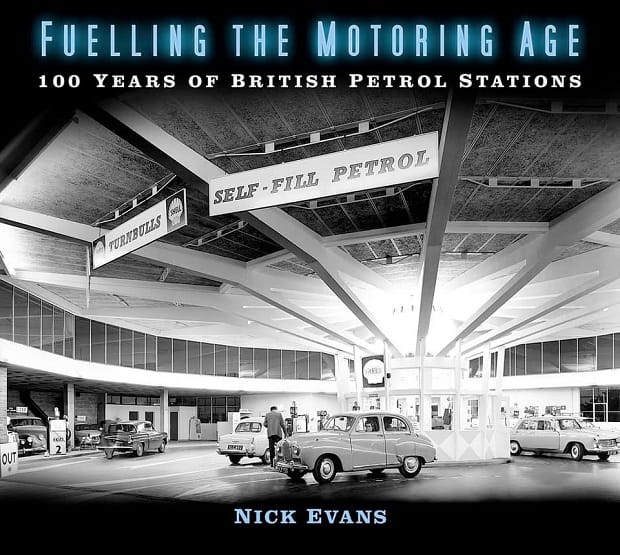 With the help of over 200 photographs the author and journalist outlines the growth of petrol stations in the 1920s and 30s, wartime rationing, their wide variety of architectural styles, the rise of self-service, and today’s growing possibility of not using petrol at all in our cars.

The book takes readers through how ‘petrol’ became the favoured fuel for early cars – its name designed to sound less intimidating to a cautious public than Motor Spirit – and its supply in two gallon cans, usually purchased from the local ironmonger or chemist.

Men, or women, often clad in slightly oily overalls, would fill up your car’s tank, wipe the windscreen and even check the oil for you. Football coins, Green Shield stamps, soup bowls or wine glasses might be handed over to keep your custom – all in the days when a single £1 note was enough to buy 100 miles worth of happy motoring.

Petrol stations have become etched on countless rural and industrial landscapes, sometimes blending in with their surroundings, and often becoming a linchpin of the communities they serve.

Nick said: “There are around 8,400 petrol stations remaining in Britain today. Over the last 20 years they have been closing at twice the rate of pubs so this book is a nostalgic reminder of a vanishing part of our street scene.

“Petrol stations aren’t necessarily the most glamorous of places to hang around in but, as consumers, we spend a lot of money there, they provide livelihoods for thousands of people and help bind together remoter communities. Their history is well worth recording and celebrating.

“I was inspired to write the book when I came across a photo of the first purpose built petrol station in Britain – opened by the AA near Aldermaston in November 1919. At the same time I discovered a Facebook page devoted to petrol stations which has thousands of followers.

“I have had terrific help from Trevor Hoare who runs the Old Aircraft Garage Museum at Rochester Airport.

“A couple of collectors along with the archives of BP and Shell generously helped me with sourcing a wide variety of photos of petrol stations old and new.

“Respected motoring writer Giles Chapman, who lives near Sevenoaks, kindly wrote the foreword to the book.”

Fuelling For The Motoring Age is online now via Amazon for pre-order at RRP of £12.99.

The launch event is at The Shell Grotto,Grotto Hill, Margate on Friday,December 6 between 5pm and 8pm where Nick will sell and sign copies of the book.