Comic legend and Blackadder writer Ben Elton is back on the road with his first UK stand-up tour following a 15 year hiatus.

Touring the country with an all-new show – Ben Elton Live 2019 the 60-year-old says his return to the stage was prompted by his children growing up. He said:  “Our nest has finally emptied, so I’m freed from the tyranny of having to make school lunches at seven in the morning while the kids try to kill each other and my wife struggles to match socks and assemble sports kits. I’ve certainly missed the soft gentle hum of a hotel mini bar.”

Ben, who has written much-loved sitcoms, The Young Ones, Blackadder, The Thin Blue Line and Upstart Crow, added: “I spend most of my working life in front of a computer screen, so it’s going to be fantastic to be back on the road visiting every part of the country.

He says live comedy gives him a rush that no other art form can match: “A stand-up gig is absolutely in the moment. Every second is unique. There’s such a special intimacy between you and the audience, which just doesn’t occur when you do comedy on TV or in a film.

“It’s not the sort of buzz I imagine a rock singer gets, strutting about and thrusting the loins and a’sexing and a’saucing. It’s all about the words, the ideas. For me a gig is a meeting of minds, almost a dialogue. Not literally, I hasten to add! When it comes to heckling, I’m a zero-tolerance comic. But laughter is the other half of the conversation. It means I’ve got my idea across, made myself understood. That’s a real buzz.” 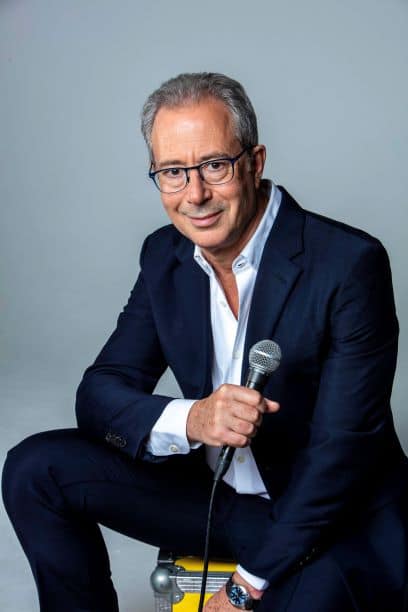 The comedian, who has also fronted  popular shows, Ben Elton: The Man from Auntie and, The Ben Elton Show, is famed for his trenchant commentary on current affairs. He said: “I feel very strongly that if ever there was a time to get out there and have a go about what’s going on in the world – to celebrate the good and castigate the bad – that time is now. I hope you’ll be aware that my tongue is firmly in my cheek when I say, I’m back because I’m needed!

“But you do feel, with the sort of comedy I do, it is probably more worth doing now than it was in what we perhaps wrongly thought of as the comfy and safe years. In the days of Blair and Major, politics seemed quite centre ground. But things have got polarised again now, as polarised as they were in the days of Thatcher and Kinnock, and that’s an exciting time to be a comedian.”

Ben says that the threats posed by President Trump, climate change and Brexit worry him deeply. “I’ve never been more concerned about the future. We are involved in a battle of ideas that could very easily cost the Earth. But you can’t despair! You have to stay engaged. And of course, see the funny side – that’s my job.”

The author and director is also looking forward to reconnecting with his fans during the tour:”It’s the ultimate recharge. Meeting people who appreciate what you’re trying to do. Exchanging ideas with them.

“We all live such isolated lives, staring at our screens, stroking and prodding our phones, cut off by our ear phones. I think that’s why live gigs have got so popular – everybody wants to reconnect and get in touch with humanity, their own and everybody else’s.”

All the same, Ben admits that performing stand-up can be a taxing process. “It’s exciting, of course, but also tense and very demanding. I’m weaving a lot of ideas together, trying to communicate quite complicated thoughts in a supposedly hilarious manner.

“I’m too focussed on getting the material across to have fun – I’m at work after all! I’ll enjoy it afterwards, when I can have a beer or two knowing that a whole bunch of people have let me live in their heads for an evening and hopefully are glad they did.”

Do fans come up and chat to Ben after the show? “Most of the people who come to see my shows don’t hang around afterwards. Not these days, anyway. When Rik Mayall and I used to tour back in the 80s, we were young and hip and there’d be a crowd of excited kids. We even got asked to sign the occasional bra (well, Rik did – he was sexy, I was farty).

“Older audiences tend to be a bit more concerned about not missing the last bus. Or last orders. One thing that does occasionally happen is people wanting to tell me that they met their partner at one of my shows years ago. That’s always lovely. Particularly if they’re still together!”

Ben is reluctant to name specific subjects he will be addressing in the show, but  he’ll be covering anything and everything as I always do. I never like to talk about actual subjects because it never sounds funny.

“It’s like if you asked Van Gogh, ‘What subjects do you like to paint?’, and he said, ‘I thought maybe a small vase of sunflowers,’ you’d think, ‘Blimey, that sounds a bit boring.’ It’s all in the treatment and the delivery.”

Always able to see the funny side of everything Ben wraps up by revealing what he hopes audiences will take away from his show: “The happy sensation that no matter how much sh*t we’re in, we’re all in it together!”

He brings the show to Margate Winter Gardens on December, 17 2019