An ambitious project to save Pugin’s Grade II listed Granville Hotel in Ramsgate from obscurity and create refurbished spaces for exhibitions, community events and conferences has been launched by Ramsgate community interest company Heritage Lab.

Heritage Lab has a legal agreement with the owner to buy the 999-year leasehold to the seafront Granville Bars. It has a year in which to raise the £485,000 needed to complete the deal and kick start plans to transform the site into a thriving creative hub and world class events space.

“We want to unleash creative potential by restoring Ramsgate’s heritage buildings,” said Rob Kenyon (pictured below), CEO and founder of Heritage Lab CIC. “We now know that this incredible Pugin building can be saved for ever, have a productive future and once again be the focal point for the community. This is the first of our Curiously Creative projects and with the support of the community and our supporters, we know we can make this happen.”

Heritage Lab CIC is aiming is to restore the former ballroom, theatre and bar to create new community spaces and restore the Granville Bars, and restaurant with kitchens,  for major events and weddings for up to 500 people.

The original hotel bedrooms have long been converted for private residential use and do not form part of the project.

The lower ground floor is currently a collection of interlinked rooms, most with opportunities to reintroduce natural light. These will become creative studios, workshops, and live to work spaces.

Pugin’s Chambers will bring life back into the property designed and built in 1867 by Edward Welby Pugin.

Once a major Ramsgate and UK landmark, the treasures behind its boarded-up façade have been hidden for some 30 years. All that remains internally of its glorious past is a sequence of spectacular, yet derelict, sea facing public rooms.

Regularly visited by princes and princesses, grand dukes, lords & ladies, writers, actors and the rich and famous from all over Europe, the Granville Hotel guest list represents a “who’s who” of the late 19th and early 20th centuries.

With 26 spas and baths, a marble skating ring, theatre and ballroom, it was the premier destination of its day, with guests arriving on the privately chartered first class ‘Granville Express’ train from London. 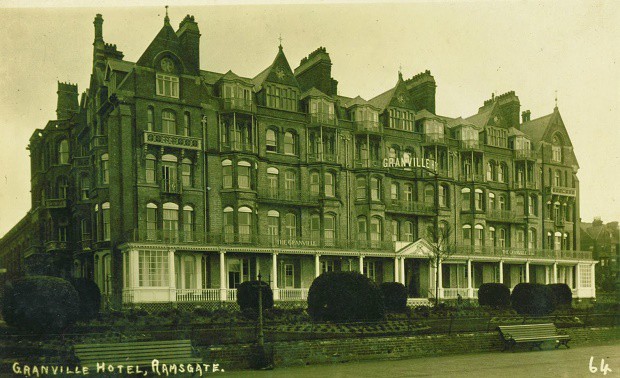 It was commandeered as a military hospital for the Canadian Government in the first World War, and medical officers who served there include the first Canadian to be awarded the Victoria Cross and a future Nobel laureate.

Later in the 20th century it was more widely known as a ballroom dancing venue and the Cave jazz club. Its public bar closed for the final time in 1991.

Edward Welby Pugin was the eldest son of Augustus Welby Northmore Pugin, one of England’s greatest architects, who played a pioneering role in the Gothic revival style of architecture in the early part of the 19th century.

Edward became an acclaimed architect in his own right on taking over his father’s practice, designing and completing over 100 Catholic churches – including a number of cathedrals – across the British Isles before his early death at the age of 41.

“The spaces at the former Granville Hotel have not been seen by the public in 30 years. Their reopening would greatly enhance Ramsgate’s facilities while revealing important historic spaces not seen for a generation.”

Heritage Lab was established in 2018 and using grant and philanthropic investment plans to find new and sustainable uses for historic buildings and community assets. The plan is to create studios, community spaces, entertainment, workspace, jobs, training opportunities and enhance pride in the town.

Anyone interested in helping with the project, or interested in being kept up to date, can register at http://heritagelab.org.uk/join/