Night patrols, working with CCTV companies and involving youngsters with a poster competition are just some of the plans for a Neighbourhood Watch Scheme which set up at Ramsgate’s Nethercourt Estate earlier this year.

The initiative is being led by Joshua Roberts who lives on the estate with wife Leanne, daughter Emily, four, and stepson Ollie, seven.

Joshua, who also works at family business Roberts Stonemasons on the estate, set up the scheme following problems with drug dealers and users outside the homes and businesses in Rydal Avenue at the start of the year.

Now the overriding issue is car crime, with numerous vehicle break-ins and damage being reported over the last few months.

Joshua, 24, said: “The scheme covers the whole estate are there are about 200 properties in it. We have been putting watch road signs up across the estate, have a facebook page and plan to have a newsletter.

“We really want to take it to the next level. The idea is to make the community safer and a better place for people to live. We want to get our neighbours talking to each other. We have also been fundraising and presented £200 to Pilgrims Hospices and have plans for more events in the summer. 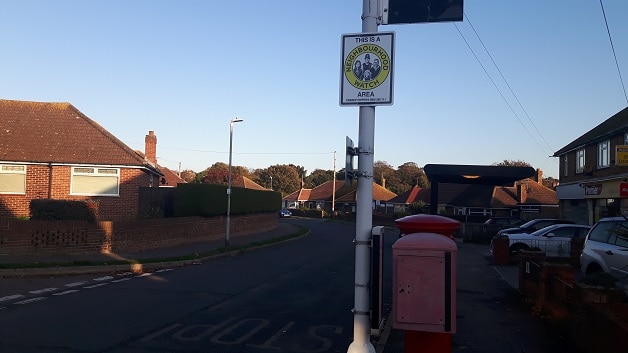 “We have done a night patrol and want to get more people involved so we can have a rota. It is taking a walk around the estate perimeter and along the roads to keep a check and deter those people who have been trying to break into cars.

“I’ve invited CCTV companies to post to our page and we want a discount offered for watch members. I’m also looking at getting kids involved with a competition where they would draw their version of Neighbourhood Watch and we’ll raise money to get the best one made up.”

Wife Leanne, 32, said the scheme is aimed at keeping all of the community safe.

She said: “We want to make sure vulnerable and elderly people know about us and know they are not on their own.

“The amount of problems we have had in the last year has been shocking and we know that can be very worrying for some [people.”

To get involved or find out more contact Joshua on 07715831963 or find Nethercourt Neighbourhood Watch on facebook.