Thanet councillor for Margate Central, Rob Yates (Lab) joined composer Emily Peasgood and the singers to belt out classics such as Back for Good and With a Little Help From My Friends

The hits were given lyrical Remainovers with lines such as ‘Hey EU’and ‘Do we need anybody? The nearest landmass will do’- Kelis’ infamous ‘Milkshake’ song was avoided as candidates arrived at around 7pm. 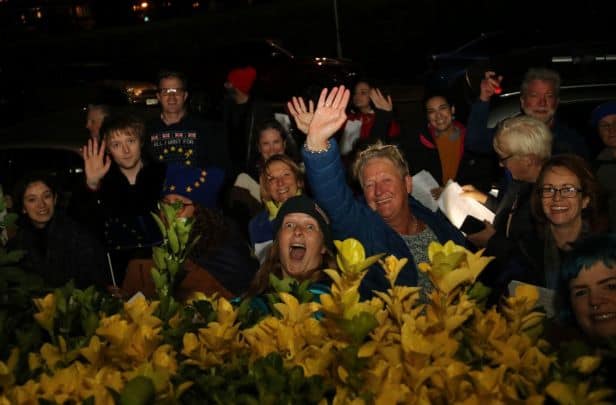 The singers in protest outside Walpole Bay Hotel 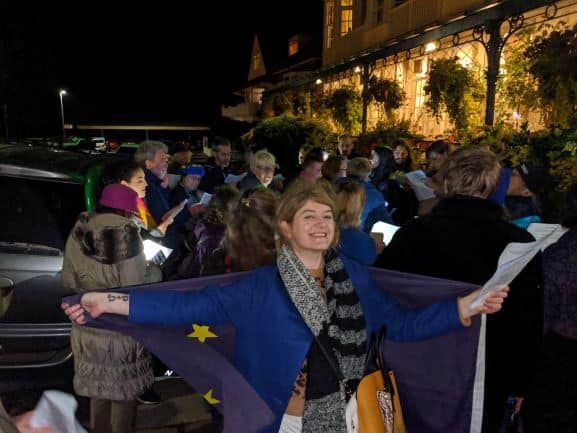 Cllr Yates said: “Last night over 50 Thanet residents peacefully protested against the Brexit Party at Walpole Bay Hotel by singing an hour of songs. It was a lot of fun and we had people who were planning to go to the event change their mind and join our chorus outside.

“Individually I would like to thank Emily Peasgood for creating the lyrics for the songs (now available for free online) and leading the singing, the Walpole Bay Hotel for letting the protest take place, and  Kent Police for videoing the event after the Brexit Party got in touch with them.”

The Brexit Party members included South Thanet hopeful Timothy Vince who says he would ‘stand aside’ if the Brexiteer -MP Craig Mackinlay – defected from the Conservatives to join the new party led by former Ukipper and parliamentary candidate, Nigel Farage.

In a well-attended meeting chaired by North Thanet candidate John Fitzpatrick , discussions regarding UK democracy and EU accountability were heard.

The candidates in attendance were:

John Fitzpatrick (North Thanet) is an emeritus professor of law in the University of Kent, a leftist and a lifelong trade union activist. He said: “The continuing failure to implement the 2016 Referendum is the single most destructive development in domestic politics in modern times. We need to Leave the EU, and rebuild our democracy.”

Timothy Vince (South Thanet) has extensive commercial and charity management experience in the UK and the Middle East, has two children studying at UCL, and served as chair of school governors for SEN children. He said: “The EU has assumed unaccountable powers without mandate. We must restore trust in politics; we must leave the EU.”

Andrea Cooke (Ashford) is a healthcare professional in the NHS, specialising in practice education for operating theatres, mother of two and animal lover.

Tania Jackson (Gillingham and Rainham) has a degree in Environmental Biology from the University of Liverpool, and has two children. She has worked on a zero hours contract in fruit packing, been a care home manager, and is now an English teacher, including voluntarily with refugees.

The guest speaker was Ben Habib, an MEP for London.

Mr Vince told the meeting, “I don’t have much political experience but it strikes me that it’s not whether there’s a Brexiteer here or a non-Brexiteer, they have all gone for this withdrawal treaty about paying money to leave the EU.”

“This is our opportunity and if the Brexit Party isn’t here I can tell you the track record of the Conservative Party is to disregard what the Brexit voters what and the Brexit Tories want.  I told this to some ladies at the Falstaff (hotel) and I will say it again if Craig Mackinlay wants to stand as the Brexit Party MP I will stand aside.”

Questions from the floor included a query about the party’s manifesto and whether they were a “viable political party.”

Mr Fitzpatrick said: “There is a manifesto that’s going to be published just like any other party but the fact remains whatever happens in future, the clue is in the title- it’s a one-issue campaign at this stage…. Brexit begins again when the deal is signed. There’s still much to be done. It may not be satisfactory but we can’t pretend we are a party with a slew of experience in other policies and we don’t want to be, I think. There will be an manifesto in the future.”

Asking about the impact of a no deal Brexit, a Manston worker questioned whether the party had considered the Yellowhammer paper which warned of financial difficulties.  He told The Isle of Thanet News: “We could be out in a matter of days. I am here to see what they have to say as I am working at Manston at the moment and on the consequences of a no-deal Brexit.”