With sunlight at ever more of a premium, and as the days become colder and wetter, October is largely marked by jobs that begin to tidy away the previous season and others that look ahead to the next.

In our newly re-covered large polytunnel it’s time to clear the summer’s tomato and cucumber plants that have finally run out of steam, give the beds a good digging over and replenish the exhausted compost. We usually plant them up with various salad leaf crops which extend our supply beyond those grown outside. As the first frosts approach, we’ll make room to bring inside and store tender plants like dahlias and cannas for the winter. We’ll also sow some sweet pea seeds now, to give them a head start next spring, hoping they survive the winter under cover without any additional heat.

Outside, the leaves are turning colour into their brown, orange, red and yellow shades of autumn. As they begin to fall, it’s a particularly busy time for our volunteers as they take out the rakes and collect them all up. We have a large leaf bin separate from the other compost heaps to put them in. There they break down over a year or two to make particularly nutritious leaf mould, which in turn provides beneficial and attractive mulch for the ferns in our woodland beds and elsewhere around the garden.

The biennial wallflowers and sweet Williams that we sowed in drills back in August have now grown into sturdy young plants. They can be planted out in their flowering positions for next spring. Remember though, if you’re planning to mix them with tulips to leave room for the bulbs to go in next month.

Given that it’s Halloween season, what’s more comforting than a hearty pumpkin risotto. 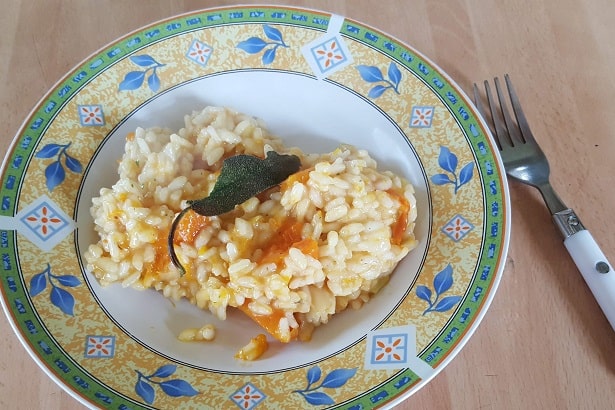