The first coffin club in east Kent will take place at Dreamland in November after a launch day next month.

Coffin Club, organised by Pilgrims Hospices, is a six-week course designed to bring people together to talk freely about death over tea and cake, find out all they need to know about their end of life choices and, if they wish, to assemble and decorate their own flat-pack eco coffins.

Wendy Hills, Pilgrims Hospices Director of Nursing and Care Services, said: “We want to empower people in our local communities to take control of their own choices and wishes around death and dying. Taking part in the Coffin Club network is a great opportunity for Pilgrims to bring people together to talk openly about death, find out about all the options available to them and to use their creativity to decorate coffins that are as colourful and interesting as the lives they have lived.”

Pilgrims Hospices will be launching the club on Monday, October 14 at Dreamland from 6pm – 7pm

It will then run every Monday from November 11, 10.30am – 2pm at Dreamland and will feature guest speakers on subjects such as ‘Cremation; Facts vs Myths’ and ‘How to create a beautiful and meaningful funeral.’

Each week there will be time to chat and catch up with other members over coffee and cake and the opportunity to assemble and decorate your own flat-pack eco coffin at a lower cost, to make your own funeral more economical, colourful and personal.

The first Coffin Club began in New Zealand and was set up by a former palliative care nurse who felt that the vibrant and varied lives people had led were seldom reflected in their funerals. She started the Kiwi Coffin Club in her garage, inviting people to come along and talk about their wishes and plans for their own funerals over tea and coffee and to put together and decorate their own coffins.

The idea has now spread to the UK where the Coffin Club network has extended from the first Hastings club back in 2017 to now include groups in North London, Derbyshire, Essex and Cornwall.

The East Kent Coffin Club will form part of a programme of events put on by Pilgrims Hospices throughout the year for the general public to come and talk about their thoughts and concerns about death. 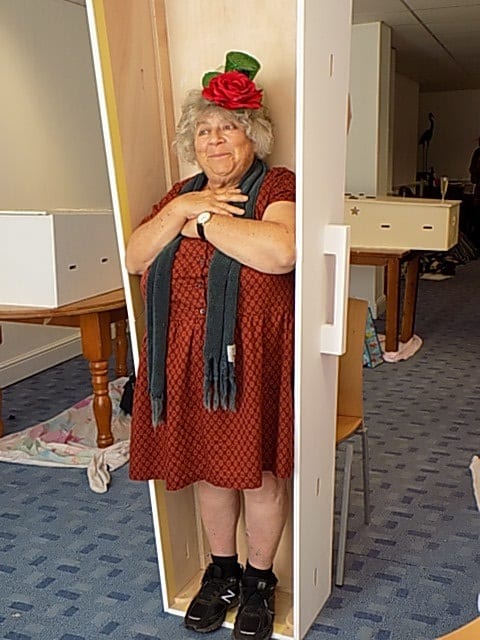 Coffin Club patron, actress Miriam Margolyes said: “Preparing my funeral with Coffin Club was not only a meaningful and practical experience: it was hilarious.

“I enjoyed every moment and I am hoping to return for a refresher – if one can have a ‘refresher’ funeral. My coffin is ready, it fits me better than most of my dresses and when I die, I know everything is taken care of at a fraction of the cost of most undertakers.

“Everyone who’s going to die should come to Coffin Club.”

Places can be booked via the Pilgrims Hospices website at www.pilgrimshospices.org/coffin-club or to find out more please call 01227 812616.

The six-week course of talks at Dreamland is £50 per person, but Pilgrims do not want this fee to hold anyone back from attending so  get in touch if you are unwaged or on a lower income. If you would also like to make and decorate your own coffin throughout the course it is £350, which includes the flat-pack coffin, storage of the coffin for the six-week course, a roller and some primer to get you started with the decorations and refreshments throughout your decorating sessions.