.The Thanet side had an unfamiliar line up on Saturday (September 14) at half back with Danny Clement at scrum half partnering Sam Rolfe at ten. The sunny afternoon brought good support for both sides but the heat and rock hard pitch meant a tough shift for the players.

Wanderers kicked off down the slope and exerted good pressure on Park’s defence but were forced to retreat after conceding two quick penalties. Early season rustiness was evident for both sides with uncertain handling leading to frequent changes in possession.  Sam Rolfe was cool when isolated behind his own goal line as he evaded Park’s attackers before clearing.

Thanet’s defence was frequently tested but repelled the visitors’ attacks with great commitment. Rolfe’s boot gave sterling service as he cleared Thanet’s lines. On 25 minutes Wanderers’ strong concerted forward drive thirty metres from the Park line drew a penalty which Rolfe duly slotted to give the hosts a 3-0 lead. 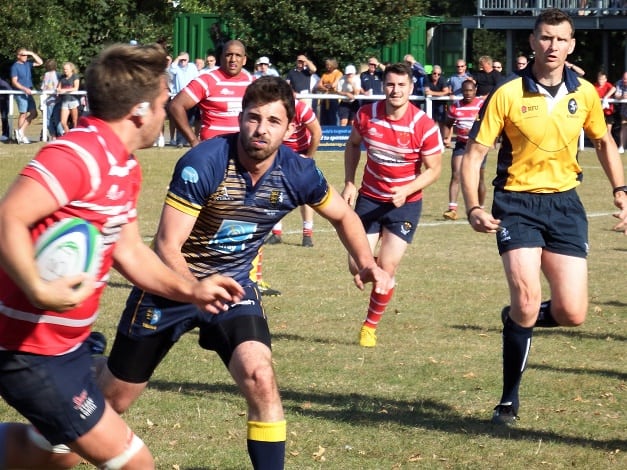 Park knocked-on with the line at their mercy. Stuart Plumridge was a rock in Wanderers centre setting a fine example that inspired other backs to raise their own tackle count. Park again looked clear before being called back for a forward pass. Thanet extended their lead with another penalty just before half time when from in front of the clubhouse Rolfe knocked over a testing one. Wanderers took a well deserved 6-0 lead into half time.

The advantage from a penalty from the restart was soon forgotten as Park upped their game and pressed Wanderers line. Brave tackles from Dan Hill and Jake Whittlesea helped to delay a first score but after ten minutes Park’s Number six opened their account with a try that was not converted. Minutes later a second try that was converted gave the visitors a 6-12 lead.

Wanderers refused to capitulate and battled away before, on the hour mark, Rolfe was on target with a third penalty to make it 9-12. The two Sams, Rolfe and Taylor, combined well on Thanet’s right and the speed of their two wingers Reece Hougham and Jackson Perry had Park’s defence scrambling back to protect their narrow advantage. A period of Thanet ascendancy was broken when a penalty was conceded in a good attacking position. Good work in the loose from prop Jake Webster won a penalty but there were a series of fierce exchanges that culminated in yellow cards for Brett Scott and the visitors No. 11. 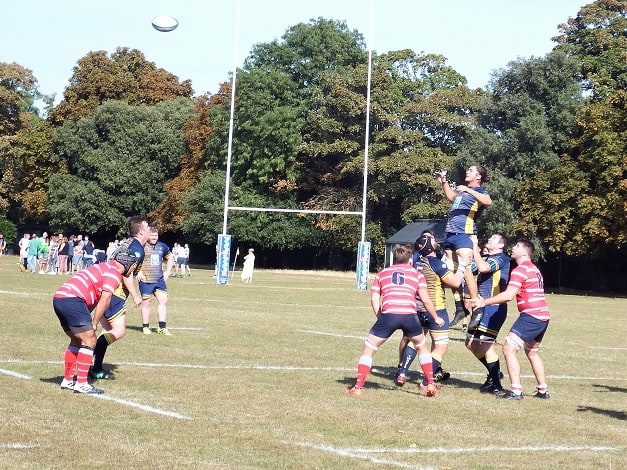 The game had moved into extra time when Park mounted a big push that broke through some fragile tackles and led to an unconverted try. In the remaining few minutes of the match, extended by second half stoppages, a flicker of hope for Thanet was extinguished when a poorly judged kick sailed straight out during the final play leading to the final whistle from referee Steve Matthews who had a good  match.

Despite the disappointing result there was much to hearten Thanet’s supporters. Captain Neil Wakefield’s throwing to the line-out was immaculate and No 8 Andy Letts made hay disrupting the opposition’s throws. Returning tighthead prop Tom Mount put in a good shift and George Orton with Adam Gaddes in the engine room can be happy with their form against powerful opponents. Wing forwards Scott and Taylor were superb defenders and Clement was combative as always in the unfamiliar scrum half role.

Rolfe, apart from contributing all of Thanet’s points from his boot, was effective in the ten shirt rather than at full back. The sight of a strong bench of Kris Finneran, David Lemon and Jake McGee replacing injuries and tiring legs was good to see. Dan Hill played through injury at outside centre and combined well with his inside partner Stuart Plumridge who had a very impressive start to the season with a massive tackle count and incisive breaks. He was Wanderers Man of the Match.

Head Coach Mile Pond was happy with how well the side competed and dealt with the physicality of Charlton Park who just missed promotion last season. He knows his side has much more to give when the squad is back to its full complement.

Thanet travel to Maidstone on Saturday, a team against whom they have yet to show their true mettle in London League 2. Kick off at 3pm. It’s an easy drive, please support Neil and the boys as they look for their first points of the season.