The mural – which is an anagram of writer T S Eliot’s name spelling Toilets – was designed by Mr Schwartzman OBE, who is an award winning artist and designer who grew up in Margate and supported the refurbishment of the Margate clock tower. He is also the Patron of the  Margate Art School project. 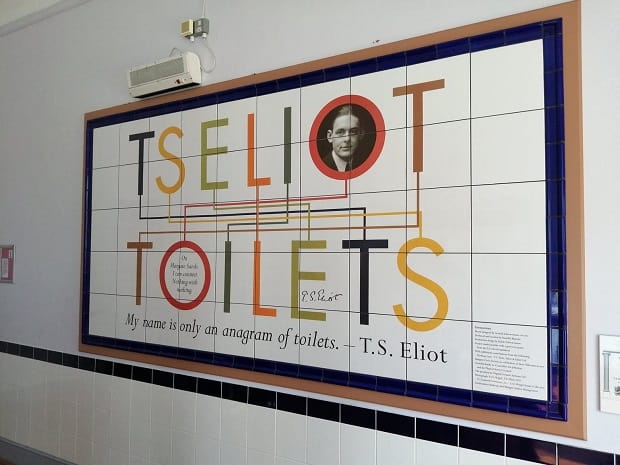 The porcelain tile mural  is 8.5ft by 5.5ft and was originally planned as a part of Turner Contemporary’s celebrations of T S Eliot’s poem, The Waste Land – part of which Eliot wrote in Margate sitting in the Nayland Rock shelter on the seafront in 1921. 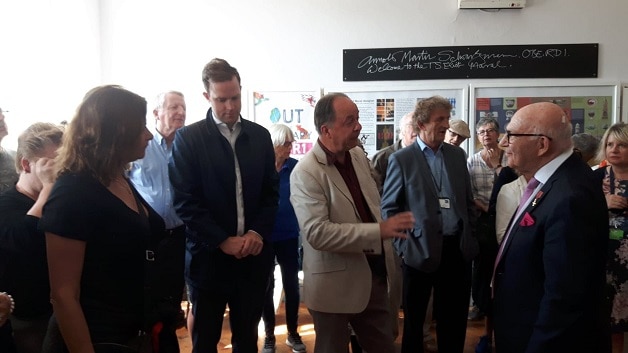 The installation had been proposed as a painted stencilled mural on the seafacing side of the Nayland Rock toilet building.

But this plan fell through so producer and curator Kamilla Blanche asked if it could be displayed at Margate Railway Station.

The T S Eliot mural was funded by the TS Eliot Foundation and Margate Civic Society for their 50th year anniversary. 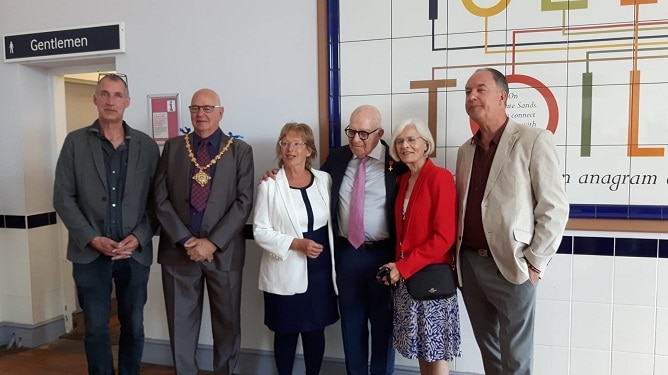 The tile artwork was produced by Digital Ceramics Systems Ltd, which produces the porcelain tile murals for The London Underground.

All the tiles have been individually printed, mounted on a backing and then fixed to the wall. 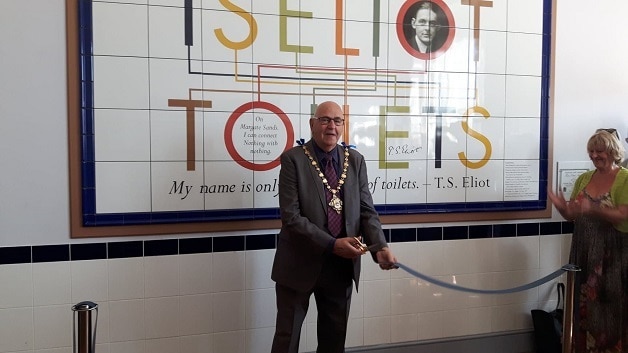 At the ribbon-cutting Mr Schwartzman OBE, who was accompanied by his wife Isolde, spoke of how his career had begun in Margate and how he had worked as an assistant projectionist in Northdown Road. He went on to become a graphic designer before working in TV, the music industry and then, after a move to Los Angeles, the film world.

He said: “Margate holds a special place in my heart and I’m very pleased to be back here again, and able to donate my artwork to a town that has provided me with such a fruitful career.

“Thank you to the Margate team at Southeastern for supporting my project. It’s an honour to have been given the opportunity to create something special for passengers to enjoy while using the railway.”

Deborah Terry, Southeastern’s Area Manager for Ashford & Ramsgate, said:“It’s always brilliant to see how murals and artwork give our stations a unique sense of identity – and that’s certainly the case here with Arnold’s work in Margate.

“We’re proud to be the custodians of the railway in Kent, and particularly so when we’re able to support artists who reflect the rich history of creativity in Margate. Arnold’s work is sure to put a smile on the faces of our passengers, who travel through our station every day.”

The T S Eliot mural is on show in the Platform 1 waiting room at Margate station.