The last two days of the isle’s Summer Kitchen scheme with free meals and activities will take place today and Wednesday (August 27 and 29).

The Summer-long programme is headed up by Sharon Goodyer, who created Our Kitchen On The Isle Of Thanet, in 2017, and this year is held at Drapers Mills school in Margate and Dame Janet primary (community hall- Highfield Road entrance) in Ramsgate.

The aim is not just to combat hunger but to bring people together with activities and the company of other families during the afternoon and then meals late afternoon/evening.

The Isle of Thanet News is also one of the community supporters of the scheme. Others include Truprint Media,Thanet Academy FM, Ramsgate Town Team, Ageless Thanet and Leon Naturally Fast Food which has donated compostable takeaway boxes.

The scheme has also been joined by isle children’s centres, The Little Art Cart and the Street Games Fit and Fed programme.

Gadd’s Food and Drink will be at today’s Dame Janet kitchen from 3pm to 6pm, educating people on the difference between best before dates and how safe it is to eat, as well as giving away food to eat in or take home.

Since this year’s kitchens opened on July 29 more than 4,000 meals have been served, including food made by the Summer Kitchen such as stir fries and Weetabix cakes, for Millmead SureStart and three families who have been given ‘intensive’ support due to extenuating circumstances.

At Dame Janet there has been an average of 26 people daily and at Drapers Mills the average has been 75 people a day.

The cost has been approximately £6 a person per day, some which has been recouped through grants and donations.

The project has also helped with meals for half a dozen youngsters in a separate isle project and fed nearly 600 people at the Salvation Army, as well as donating to their food bank.

Sharon said: “Many of our customers eat several meals and also take a packed meal or two away with them.

“We have served tasty healthier food and lots of it; The core paid team of Paula, Sharon, Isabel and Sonia have done an incredibly effective job. They have made sure everyone felt welcome, the meals were safe and were served on time. They even got used to me changing things the whole time!

“We cannot decide what we want to cook and order in the ingredients we need. We do it back to front. We look at what food we have gleaned, what’s been donated by Sainsbury’s customers and bought from Fareshare and come up with a tasty healthier dish we can cook for that evening.

“The Forest school has been a generous and freely given source of knowledge , calm and cabbages. Jamie and the Windmill allotments are old friends now and got us out of a bind.

“We have given away more than £5,000 worth of vouchers and coupons for free haircuts, free tickets to see football matches and free Your Leisure family swimming vouchers and theatre tickets

“We have had visitors which have given us all a chance to see the people who have been elected to run our bit of the world and to represent us such as MP Craig Mackinlay, Kent Police commissioner Matthew Scott, Leader of Thanet council Bob Bayford is expected this week and we had Paul Luxmoore – the CEO of five schools in the Coastal Academy Trust – as well as a district councillor and a member of POW.

“Lots of food, nappies and toiletries and sanitary products have been given away too.”

The project has helped so many families again this year, following on from its debut last year, that there are plans to expand in 2020 with even more schools opened up thanks to a pledge from Mr Luxmoore.

Cllr Barry Lewis said: “It will be expanding as we have got the promise from Paul Luxmoore of more schools in the Coastal Academies Trust which will open their doors.

“In a perfect world there would not be a need for the kitchen but we will be back next year even bigger if necessary. The Summer Kitchen is here to serve the community.”

Next year’s scheme has been dubbed Summer Kitchen: Unlock Our Schools and will aim to encourage and support community groups to use the facilities their school offers to run a summer kitchen themselves.

Sharon said: “We have provided the sort of practical help that is exactly what is needed. This has saved people lots of money which they have used to pay other bills such as school uniform, college bus passes or several people have told me that the water bill is a troubling one at the moment.

“We have offered a much longer day and. a richer mix this year. Collaborative games, swap shop, hair cuts, individual family food boxes, cooking activities, gleaning, visits to the forest school have all been enormously popular. 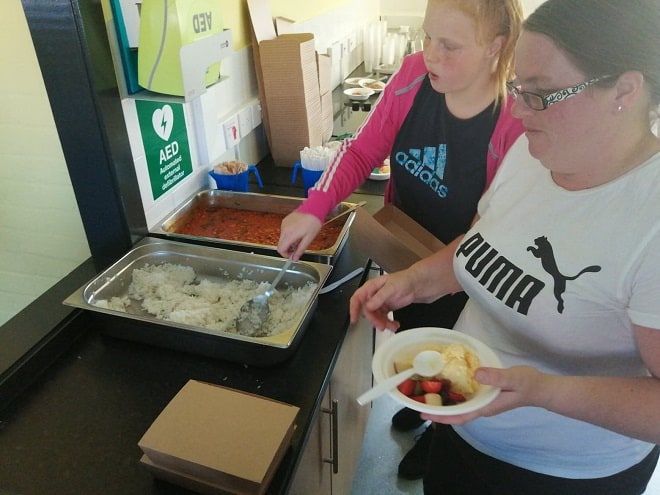 “But the generous tasty and much healthier meal along with the chance to be sociable and have somewhere to take the kids are the most appreciated parts. The care and attention each child received from  Inclusive Sport’s team made a big difference to their willingness to join in .

“Those who can pay have put contributions in the bucket and I have banked nearly £250 each week  from this source.”

Funding for the kitchen has been made up of a combined members grant from Cllr Constantine and Cllr Lewis of £8,000 and donations of £2,500 from the Masons, £2,000 from Pfizer, £2,350 from Ramsgate Town Council, £200 from the Mothers’ Union and funding from Sainsbury’s which is still to be totalled.

Meals are from around 4.30pm. All children eat for free and adults can choose what they pay. There will be red collection buckets in the restaurant. Donations of £2 – £3 cover the cost of an adult’s meal and help keep the children’s meals free.