It has been a meteoric rise for Broadstairs-based touring car driver Michael Crees.

Four years ago the former Charles Dickens student was running his plumbing and heating business and watching the British Touring Car Championships as an avid fan.

But in just three years of professional racing Michael has become one of the UK’s top 30 touring car drivers and had his debut season in the BTCC this year.

The dad-of-two was catapulted into the racing world after deciding to enter local championships at Buckmore Park karting track in Chatham. He caught the eye of track owner, the late Motorcycle World Champion and Ferrari Formula 1 World Champion driver John Surtees, and was invited to compete in the prestigious fundraising Henry Surtees Foundation annual challenge.

Michael, 35, said: “ There were 25 drivers, 24 professional racing drivers and me. I turned up and was looking around at all these names like Jake Dennis and Ben Barnicoat. I qualified 21st out of 25 and  won the heavyweight championship, fastest lap of the day and was placed second overall.”

From there it was a move up to the Ginetta GT4 Supercup for 2018 where he took 11 class victories and eight podium finishes to clinch the title – the second in just in two years.

Another move up to Tony Gilham’s Team HARD has followed and Michael is now competing for VW in the high profile British Touring Car Championship.

He said: “It is massive in the race world, you become a celebrity overnight, on test days at Snetterton there are people waiting outside for photos and autographs. I am still getting used to it, I’m just a normal guy from Broadstairs.

“I never knew that I could race cars although it had been my dream growing up, I was always a massive fan of racing. Four years ago I was paying to go to the championships and now I am in it!

“For me it is about keeping successful, keep going forward now I have found myself at the pinnacle of racing.”

Off track Michael still has a plumbing business and takes to the road in his Range Rover Sport or VW transporter van. Husband to Jodie and dad to Bonnie, three, and Hugo, six, he is clearly a man without airs and graces, who loves family, friends and a pint. 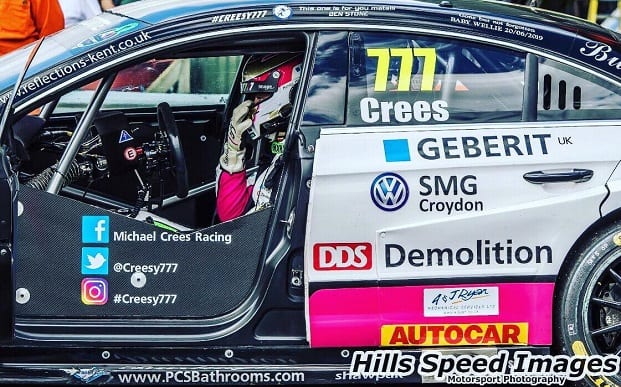 And he is quick to praise his invaluable local support from sponsors DDS Demolition – run by Les Ray and family – and everyone at his local Cramptons. Other backers are Burlington Bathrooms and Premier Contract Supplies, Geberit UK, Hansgrohe, DPC Group, Merlyn Showering, SMG Croydon, MVC Events, MJ Plumbing and Imperial Render.

He said: “It is really good to have local support, Cramptons are really behind me and Les and family are great sponsors.”

Michael returned to the grid for The Kwik Fit British Touring Car Championship at Snetterton at the weekend (August 3-4) for Rounds 16, 17 and 18.

The Team HARD driver claimed a pair of strong race finishes during what proved to be an action-packed sixth event of the season.

Come the end of the 30-minute shootout for pole position, the Burlington Bathrooms and Premier Contract Supplies supported driver set a best time of 1m 57.214s to secure 25th on the grid for the opening encounter of the weekend.

Starting on the 13th row of the grid for the first race on Sunday, Michael saw his hopes of making progress over at the end of the opening lap after being forced to pit so that the team could rectify a coolant temperature issue.

Rejoining the fray half a lap down, Crees produced a consistent drive to finish 27th. In the second race around the 2.97-mile circuit, Michael ran as high as 20th at one stage before ultimately finishing 22nd.

Bringing the weekend to a close with the third and final encounter from East Anglia, the Brodstairs driver’s aspirations of a strong result ended almost immediately as he was involved in an incident at the exit of Wilson on the opening lap.

One of several cars caught up in the melee, the 35-year-old was forced to pull off the track with damage bringing a premature end to his race day.

Michael said: “It has been a challenging weekend in terms of results but I can look back on Snetterton as somewhat of a turning point. We made plenty of progress over the meeting, which should only put us in good shape moving forward.

“I’ve worked on my driving style and we’ve really dug into the set-up of the car and the feeling I had seemed to be positive. I enjoyed some great battles out there, it was an action-packed weekend, and I’d have liked to have seen what we could of done on the soft tyre, especially as most were on the hards, but it wasn’t to be.

“We’re heading back to Thruxton in a couple of weeks for the next event and I’m optimistic that we can make further progress there.”

Michael races at Thruxton on August 16-18. He has also been invited to take part in the Barcelona-Catalunya 24 hour race behind the wheel of a Porche 911.