Some 300 people turned out to join a “Join Hands For Our Hospital’ demonstration today (August 3) outside the Queen Elizabeth Queen Mother Hospital in Margate.

The event was organised by campaign group Save Our NHS in Kent (SONIK) in protest the proposed removal of services — including Thanet’s acute stroke unit — from the hospital.

Join Hands For Our Hospital is the latest event in the campaign by SONIK to retain services in Thanet. The group is also mounting a judicial review of the decision to reduce the number of hospitals offering acute stroke services in Kent and Medway in favour of three specialised hyper-acute units.

The NHS in Kent and Medway say the hyper acute stroke unit proposals are supported by local, regional and national specialists, including the four hospital trusts and the senior stroke consultants in Kent and Medway.

In a recent statement they added: “It is our very carefully considered view that the option approved – for hyper acute stroke units at Darent Valley Hospital in Dartford, Maidstone Hospital, and William Harvey Hospital in Ashford – is the one that will best deliver the necessary improvements to care for stroke patients.”

Further proposals are being considered to move services to east Kent’s urgent, emergency and acute medical care -including A&E departments – specialist care, and planned inpatient orthopaedic care (such as hip and knee operations).

Commissioners are also discussing whether to move maternity and children’s inpatient services. The options being discussed are a new hospital in Canterbury or a larger A&E at William Harvey Hospital, Ashford, or an expanded A&E at Queen Elizabeth the Queen Mother Hospital (QEQM), with inpatient care.

Kent and Canterbury Hospital would provide diagnostics (such as X-ray and CT scans), day treatments and surgery, some routine planned inpatient surgery, outpatient appointments and rehabilitation.

Urgent Treatment Centres treating illnesses and injuries which are not 999 emergencies, in all three hospitals. 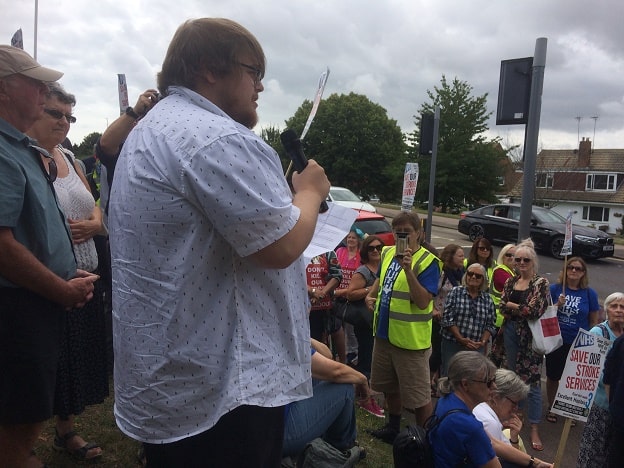 Prior to the event at the Ramsgate Road hospital site SONIK spekesperson Carly Jeffrey said: “QEQM is Thanet’s only hospital. Not only is our stroke unit under threat but we also risk the closure or downgrading of our accident and emergency and maternity units. We have to protest against any attempt to take these services from us.”

Speakers included Cllr Candy Gregory, doctor Coral Jones and Carly Jeffrey. Donna Garfield, who is a new member pf SONIK, talked about how she became involved in the campaign and is now one of the key organisers.

Campaigners then walked from Margate hospital to the High Street and finished up at the Market Square.

Kent County Councillor Karen Constantine,  Health Overview and Scrutiny Committee member and former head of maternity for the South of England at the Royal College of Midwives, said questions she has raised over the possible early closure of Thanet’s acute stroke unit are yet to b answered.

Find out more about SONIK here