The Rotary Club of Westgate & Birchington

The Rotary Club of Westgate & Birchington recently organised a sponsored cycle ride in aid of Prostate Cancer UK and a group of Rotarians and friends cycled from Minnis Bay to Reculver and back. There were refreshing drinks at the half way point at Reculver Towers and then, back at the beach huts in Minnis Bay, riders enjoyed lots of cakes, buns and drinks. Sponsorship pledges are still being collected but, so far, over £350 has been raised for Prostate Cancer UK. Many thanks to all who participated and to the generous sponsors.

Every Thanet Rotary Club was represented  when Ramsgate  Club installed Henry Golding as its President  for the new Rotary Year, taking over from Pat Hersant.

The out-going president said it has been a very successful year for the club. Its Christmas collections had raised over £4,000 for  the charity funds  and hundreds of toys distributed through Social Services.

Mr Golding said he had joined the club six years ago and was very proud to become president. He planned to repeat the successful events of the past year, including an old folks tea and ride in the local countryside,  the quiz held in conjunction with the Inner Wheel Club as well as the golf and putting competitions.

The club would present the third £1,000 donation to You Can, the youth cancer organisation.

He said the club would, for a trial period, meet on the first, third and fifth Tuesday of each month, instead of weekly meetings. It was hoped this would help in the club’s efforts to attract new members

The meeting also  witnessed the induction of  Rtn Julie Miller as President Elect, to take office for 2020/21

We held our meeting at The Racing Greyhound in Ramsgate on July 4; with a good attendance and fewer apologies than usual and members requested that our best wishes be sent to three members with health problems. It was reported that the Secretary accepted and attended the Margate Mayor Making ceremony on their behalf in May and that the newly elected Mayor is Cllr; M. Tomlinson.

Our Normandy veteran who got a place on the “Boudicca” to return for the “D” Day commemorations Bert Cox said that it was a very special time for him and one he’ll not forget as they were all treated like royalty. He received applause and thanks by those attending.

It was reported that the Ramsgate “Armed Forces Day” took place with fewer veterans and what appeared to be fewer members of the public watching this year.  The date for our New Year Dinner was given and names were passed to the Secretary.  The Ramsgate RBL Club will be holding a Merchant Navy Day event at the club on Sunday, September 1 and all merchant seafarers are welcome to attend.  On the actual day of September 3; Ramsgate, Birchington and Margate Mayors will be holding events for this day and we thank them all very much.

Final details were given on the big parade at Tower Hill in London when we again take a full coach to this service / parade on September 8.  We will again be attending the “Festival of Remembrance” at the Winter Gardens this year.  Finally, it was reported that our friend and colleague of the Marine Officers Association of Thanet Captain John Neil sadly “crossed the bar” earlier and we sent our condolences to all.  Our next meeting will be on October 17. 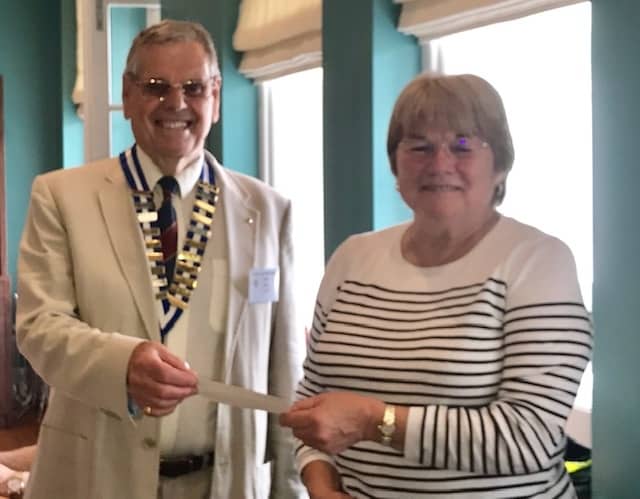 Broadstairs Probus Club provides a friendly forum for retired and semi-retired men over 55 who have been involved in a professional or business working life and who currently live in the Broadstairs area.

For their June meeting, the speaker was Jan Buckley who is currently Chair of The Cheerful Sparrows Thanet charity.  Jan explained that the charity was originally named after a Mr. Sparrow who fought in the Boer War, and the Margate Branch ( now Thanet ) was formed in 1925.  By 1939, the charity had raised £25,000 of which £20,000 went towards the building of The Margate General Hospital ( now the Queen Elizabeth The Queen Mother Hospital ) and as a recognition the Cheerful Sparrows Wards were named.

Now, the charity continues to support the patients of these wards by providing essential items such as the recent purchase of fans to keep patients cool in very hot weather and a Sara Stedy Aid to improve patient mobility around the hospital.  However, Jan was keen to say that the Charity also supports local people in the Thanet community who are in exceptional need of such things as child`s shoes and uniform, child`s beds, second-hand white goods or basic furniture.

Jan stressed that every penny of their funds goes towards helping local people in the Wards or in the Community.  The funds come from organizing quiz nights, Westwood Cross events, carol singing, fundraising days at QEQM and generous donations from local groups and individuals and members of the charity.  Jan was anxious to spread the word in her talk which was very well received by members of the club and provoked some interesting questions. Finally, the club’s president Eric Mark formally thanked Jan for spreading the word about Cheerful Sparrows and, on behalf of the club, handed over a donation to help the charity’s funds.

The club meets for a coffee morning on the second Tuesday of every month and for a formal lunch meeting on the fourth Tuesday of every month both at The Yarrow hotel.  If you are interested in finding out more about the club, or perhaps trying out a free coffee morning , then please contact :Rogan Montgomery-Smith on 01843 603939 or email him on probus@rogan.biz for further details.

On Sunday, July 21 the famous Round the Goodwins Race takes place from 10am with all class of yachts entering. This forms part of the East Anglian Offshore Racing calendar. Prizegiving for this race is held that evening about 6.30pm.

The official start of the regatta is on the Monday morning when the Mayor of Ramsgate Raushan Ara will fire the cannon to start the first race at 11am.

There is one race on the Monday and Tuesday with the race pack split, IRC classes start from a committee boat offshore and the Cruiser class start from the club race line which is the RTYC Race Hut on the Eastern Pier Head above the Brasserie Restaurant out to the red port entry marker on the outer harbour.

On the Wednesday the Spinlock IRC East Coast Regional Championship starts and continues through to Friday, these races also qualify for different cups.

Thursday the offshore IRC fleet will compete for the QEII Cup with two offshore races. The cruisers will race inshore with just one race. Prize giving will take place this evening at 6.30pm.

Friday the majority of the fleet, IRC as well as the Cruiser class 5 & 6 will race offshore for the prestigious Gold Cup, whilst the Cruiser class 7 will race from the club line. The final prizegiving will be this evening around 6.30pm, attended by the Mayor.

The public can view the event from the beach or the harbour wall with starts usually at 11am.

This year our headline sponsor is a local company from Broadstairs called Euromarine Insurance, owned by parent company AstonLark, as well as many supporting sponsors like Miles & Barr, Shepherdneame, Page & Sons Ltd, Copper Rivet Distillery and Icom to name a few, full details on our website www.ramsgateweek.com.

This year we have a lady chairman for the first time, Karen Cox.