Stagecoach has officially launched its new Thanet Loop fleet with a celebration in Margate.

At the launch Joel Mitchell, Managing Director at Stagecoach South East, said: “Thanet is hugely important. So many people in the area use the buses and our drivers are part of the community.”

The new buses are also equipped with WiFi and USB charging points as well as next stop audio visual announcements.

Mr Mitchell, who said he was celebrating his 20th year in the transport industry, took on the role at Stagecoach after almost 20 years working in rail.

He said: “Stagecoach is about investing in people and looking after employees and customers.”

Guest at the launch included mayors of Ramsgate, Margate and Broadstairs and county and district councillors.

Ramsgate mayor Raushan Ara said: “This is very good news. I had been in touch with Stagecoach  regarding audio visual announcements after receiving a message from a Ramsgate resident so I am pleased to see the new buses have this facility.” 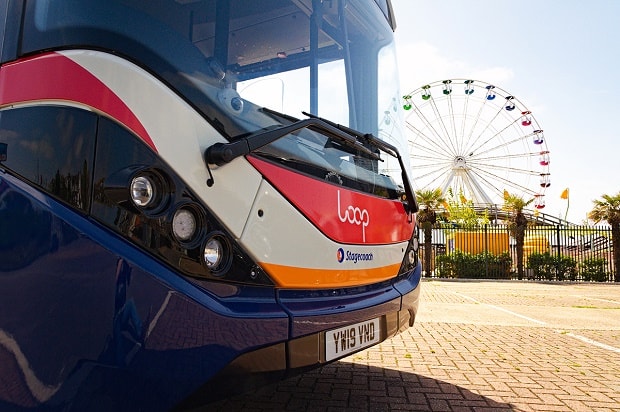 The Loop carried more than 4 million passengers in 2018

Buses running around every 8 minutes Mondays to Saturdays and every 10 minutes on Sundays.

Stagecoach is one of the biggest bus operators in the UK, running around 7,000 vehicles in nearly 100 towns and cities in the UK.

Stagecoach South East headquarters runs some 470 buses and coaches and employs more than 1,200 staff serving over 42 million passengers per annum.

A 10% improvement in access to bus services nationally  would mean 50,000 more people in work

A 10% improvement in connectivity in the most deprived rural areas would result in increased income for 22,500 people