The 1/24 scale model, with 573 components, is the first Airfix kit of that scale to be released through Hornby in five years.

The design was unveiled in Telford last year and now the kit is available to buy. 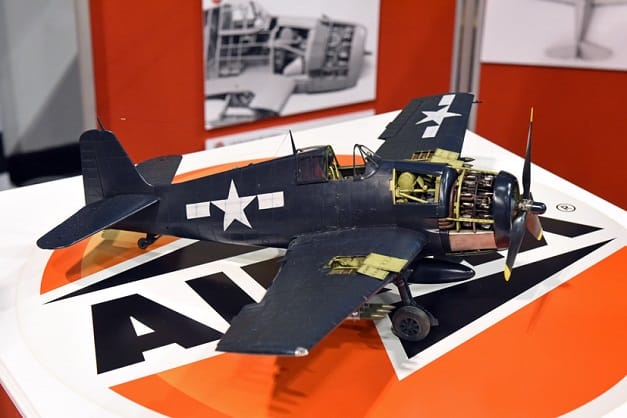 It follows a turbulent 18 months of overhauling management and finances to claw back the loss of a ‘ginormous’ £10 million per year over three years.

Mr Davies says this is now down to a £5 million loss and he won’t be resting until the firm reaches the first “pound in profit”.

The father-of-three, from Swansea, said: “We are looking at the big picture. There has been a huge amount of change over the last 18 months. The management was removed and new management, people from within the industry, have been brought in.

“We now have the first lot of new products arriving since the new management came in. This is because  there is a planning and lead time for licensing and product development.

“The Hellcat is a one/24 scale Airfix kit with 573 components. This is our first 1/24 Airfix model in five years. The previous management did not have the confidence to make the investment but we understand what the market wants and this product will sell internationally.”

The Hellcat is joined by many fresh models, and big names, now aligned with Hornby. These include Harry Potter train sets, Times Warner mini Scalextric themed with characters such as Batman and Wacky Races and, closer to home. Southeastern train kits.

Mr Davies says the return to Margate was part of ‘the fix’ applied to the company during the last year and a half.

He said: “We believe in people, products, good relationships and heart and Margate has given us back our heart.

“We now have more engineers in the UK, European and Asian markets working to support us. We have moved away from gimmicks and back towards product and design.

“We are now planning much further forward and are ready for next year and the toy fairs in New York, London, Hong Kong. We had lost our confidence as a company because of the financial mess. The company had run up ginormous losses of £10million a year for three years but what we have now been able to do is halve that loss and I won’t rest until we are that first £1 in profit.”

The new Hellcat model goes onto the market at a price of £119.99, and will take an advanced modeller at least two months to build.