A major property landlord and its management company which hauled an Arlington House resident into court in a dispute over withheld service charges has been ordered to pay back £105,641.90 to all of the block’s lessees.

But Mr Moss disputed whether the charges were reasonable, and so payable, claiming there were missing invoices, late accounts, incomplete or below standard works and overcharging. He produced two lengthy and detailed submissions to support his argument.

The case was transferred to a First Tier Property Tribunal to be scrutinised. At the point of the case being heard the amount being claimed as outstanding personally for Mr Moss was £2,542.95 after he made some payment and some credits due to overcharges were put on his account.

However, the tribunal examined the overall service charges applied to all 142 flats in the block over a period of five years resulting in a decision by the Judge on June 7 that deficiencies in the standard of service relating to building maintenance warranted a 20% reduction in management fees on top of another 10% reduction for excessive delays in producing service charge accounts. 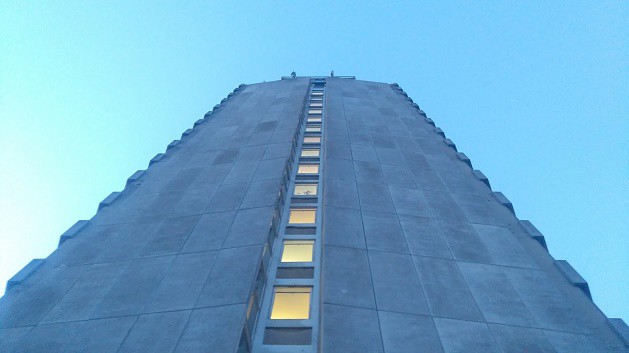 The ruling highlighted instances of accounting errors, double charging and overcharging for goods and services with a determination that the service charges payable by all the lessees for the period 2013 to 2017 should be reduced by £105,641.90.

In the resulting determination document the Judge commented on the managing agent’s lack of financial transparency, failure to instruct local tradesmen to keep the cost of works down, and failure to respond adequately (or in some cases at all) to concerns raised by lessees and the residents association.

Inadequacies by Trinity Estates in failing to deal with fire safety issues since 2015, which had resulted in Kent Fire and Rescue Service issuing an enforcement notice in 2018, were also highlighted as well as comment on the ‘poor state’ of walls, ceilings and other areas of the block.

The document states: “It is a striking feature of this case that although the directions afforded the Applicant (the landlord and managing agent) the opportunity to serve a reply, the response failed to address in any detail the vast majority of the challenges made by Mr Moss.

“Moreover, although Mr Moss had pointed out that there were no invoices for more than £430,000.00 of claimed expenditure over a period of 5 years, the Applicant’s response to this point was covered in two short paragraphs” saying the allegation “misconceived”.

Criticism was made of some unnecessary use of tradesmen from outside the county, who had then charged travel expenses. Many of these charges were struck out by the Tribunal.

The Tribunal document noted: “In response to Mr Moss’s query, the Applicant has listed (without supporting documentation) the materials supplied, including 515 litres of paint, and stated “the relevant invoice relates to decorating supplies which were necessary to paint the pump room”. However the Tribunal viewed the pump room; its concrete walls are not painted.”

At least three leaseholders have pledged to give Mr Moss half of their refund in recognition of the battle he mounted in the court.

About 98 flats belong to individual lease holders, 36 are retained by the landlord for private rentals and eight flats are owned by Arrowgrass.

Simon Pengelly, chair of Arlington House Resident and Leaseholder Association, said: “Whilst we are pleased with the result that each flat will each get back some £600 to £800 in overpaid service charges, we are still suffering from poor management at the hands of Trinity Estates.

“Issues raised with them over years have not been resolved and Trinity Estates refuses to liaise with the association. A Notice issued by the fire brigade in August last year and a further notice issued in April this year include repairs that need to be carried out which are relatively minor but have not been carried out.

“I must stress that Arlington House is not another Grenfell tragedy waiting to happen – the building is very fire-resistant, we do not have any cladding and we have two fire escapes. However, we have already paid for works to be carried out to doors and service ducts in 2017 and are now expected to pay again. There is a maintenance contract for the fire alarm system yet faults remain despite repeated complaints to Trinity.”

Ward Councillor for Margate Central, Rob Yates (pictured), said: “I have lived in Arlington House for two years, in that time I have seen a steady decline in building repairs and maintenance. I was elected ward councillor last month and am advocating for Trinity to take some positive action, accept its responsibilities for managing the building properly and engage with the residents on a regular basis.

“Over several years John Moss has stood up for the Arlington House residents by meticulously analysing the work Trinity has done. In doing so he has found serious flaws in the way Trinity invoiced the residents and in the services they provided. I would like to thank him for his tireless effort in bringing this case to its conclusion and potentially saving each leaseholder £800. Hopefully Trinity will learn a valuable lesson here.”

A spokesman for Trinity Estates said: “We are currently reviewing the determination provided by the FTT, until this review is complete we are unable to make any further comment.”

Read here: The Brutalist tower block that marked the start of 1960s redevelopment in Margate