Scores of suspected violent and organised criminals have been arrested by Kent Police officers during three days of raids.

The successes from a two day operation, initially planned to finish yesterday (June 20), continued into this morning with a further four people arrested from eight additional warrants.

In all 59 people have been arrested from a total of 54 warrants. More than 600 wraps of class A drugs and £27,000 in suspected criminal money has also been seized.

Assistant Chief Constable Nicola Faulconbridge said: “The volume of arrests and warrant activity carried out over the past three days sends out an unequivocal message that we have no tolerance for people who choose to become involved in violent or organised crime.

“Our activity has targeted those we suspect of committing crime and in the coming months we will continue our investigations to ensure that offenders are brought to justice in the courts.”

The raids were carried out by Kent Police officers alongside detectives from the Kent and Essex Serious Crime Directorate.

This was mirrored by Essex Police, whose efforts in their county mean more than 100 suspects have been arrested by the two forces as part of the same operation. 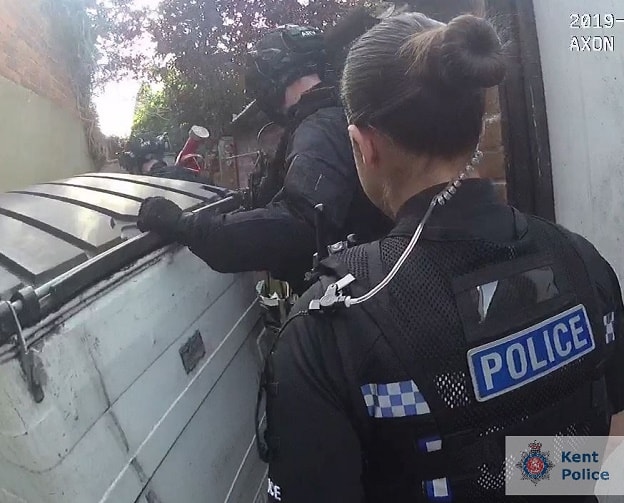 Officers also travelled to several addresses in London to target those suspected of bringing crime across the border.

Notable seizures from the past three days include a samurai sword, cannabis hidden in cans disguised as fish food, an Audi S3 and designer goods worth more than £10,000, which is believed to have been bought with the proceeds of crime.

Assistant Chief Constable Faulconbridge added: “Members of the public can feel assured that Kent is a safe place and we are doing everything in our power to make the county a hostile environment for those intent on bringing crime to our communities. This includes working closely with our colleagues in Essex Police, who have achieved similar levels of success.

“Our proactive work has by no means come to an end. This recent surge of activity complements the approach we take on a daily basis with specialist officers who proactively work to identify and disrupt those who seek to commit crime in our communities.

“I would ask members of the public to join us in our efforts to remove weapon carriers and drug dealers from our streets by reporting their suspicions to us online or by calling 101. Alternatively call Kent Crimestoppers, anonymously, on 0800 555 111 or 999 if a crime is in progress.”