The Despacito Art School is a weekly art programme at Open School East (OSE) that was set up in summer 2017 by popular demand of the children who live and play around OSE’s former location in Cliftonville, the UK’s fourth most deprived ward. OSE is now based at the adult education centre in Hawley Square.

Despacito is a hands-on place to learn about art, craft and functional object-making. The young people, aged 6-11, take part in activities including drawing, painting, sculpture, musical instrument making, filmmaking and acting. In addition, they put on two exhibitions a year and take part in the yearly Margate Carnival, on the first Sunday of August.

‘Margate is a Playground’ is the theme the young artists have been working with since February. They have participated in in-house workshops led by OSE alumnus and artist Emily Whitebread alongside guests, including a session with Cliftonville-based theatre company 1927 – where they created stop motion animations from cut out drawings – and a sound workshop with Louis Palfrey, who recorded soundscapes with the children to be edited and used as the soundtrack for the final animation.

The animated film has been premiered tonight.

The Despacito Art School is the only place in Margate offering free, regular and committed cultural provision for young children from disadvantaged backgrounds – including the youngest of the Roma community – where lack of money, language, culture and perception act as barriers to access art programmes. It is through extensive outreach work, knocking on doors, learning phrases in Czech, Slovak, Polish and Turkish, and communicating regularly with the parents and carers, that OSE has successfully befriended and included this section of the community into their fold.

The children who attend the programme get collected and dropped off every Wednesday afternoon by a dedicated team of artists and support workers made up of Open School East’s Associate artists, alumni and team members. 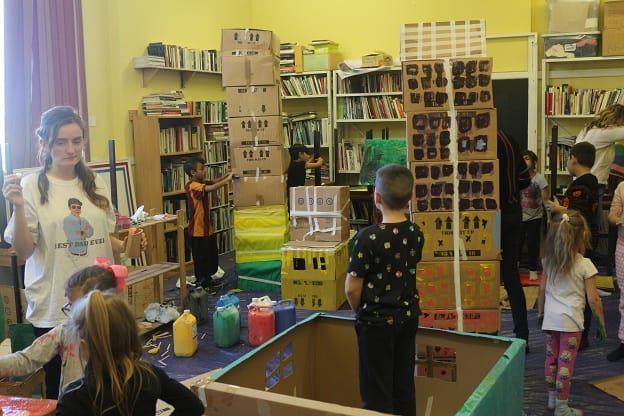 OSE Activities and Events Manager Ayaan Bulale said: “Being a child of immigrants is a constant balancing act where you work hard to integrate into your new environment and at the same time work just as hard to retain your own language and culture.  Our young ones come from challenging backgrounds and OSE strives to provide them with
opportunities to explore and make sense of their world through art that gives them a voice. That is why we ensure we host two art exhibitions a year where they can show off their work and feel pridem in their achievements.”

OSE Director Anna Colin added: “From the moment we moved into our first home in Margate on Athelstan Road, the young people started to knock on the door asking what we were doing and if they could be part of our events. They left no room for a polite no and were adamant they should be included in our activities. They have invited us into their lives and have given the organisation a chance to reflect and act upon what it means to be responsive and non-exclusive.”