During late summer of 1914, as war engulfed Europe, a young writer was convalescing at the home of friends in North Foreland. After reading all the books in the library, so the story goes, he began writing a novel to relieve his boredom.

The writer was John Buchan and the book, The Thirty-Nine Steps, was to be the first of five adventures for his boys’ own action hero, Richard Hannay.

Since the book’s publication in 1915 the exact location of the steps, indeed whether they existed at all, has intrigued many. The opening scene of the 1954 film adaptation, starring Kenneth Moore, shows a set of steps somewhere in London. Various locations around the country claim to possess the original 39 steps but those that actually inspired the novel can be found here in Thanet.

It was on doctor’s orders that the Buchan family came to Broadstairs. John’s daughter, Alice, was recovering from a mastoid operation, so the family rented St Ronans 71 Stone Road (now demolished). But while Alice’s health improved, John was struck by unaccountable stomach pains, which would later be diagnosed as an ulcer.

At the same time the family were holidaying, a cousin of Susan Buchan (John’s wife) was renting a cliff top villa at North Foreland that had steps running down through the cliffs to a private beach. The Buchans were later invited to stay, there being plenty of room. This house, St Cuby, became Trafalgar Lodge in the book where Hannay pursues the story’s antagonist.

Buchan had decided to write a thriller featuring Richard Hannay before he arrived in Thanet. What he was lacking was a plot. However, a combination of local events would set his creative mind whirring.

Coming to Broadstairs and being taken ill are two factors. A third was the country’s wider mood, for Britain during the early days of the Great War was gripped by xenophobic fear. There was also the threat of German naval bombardment of coastal town and enemy spies were rumoured to be lurking everywhere.

A German spy was said to have been captured at North Foreland signalling to a U-boat just days before the Buchans arrived and other spy scare stories appeared in the local press. But it’s the subterranean steps leading down to the beach that were the biggest source of inspiration.

In Buchan’s day there were 78 wooden steps. These were replaced during the 1940s and now there are more than 100 concrete steps, which zigzag through two shafts and three tunnel sections. The upper entrance is completely camouflaged by shrubs that, as in the novel, obscure the passage from view, while the beach entrance is only accessible at low tide. 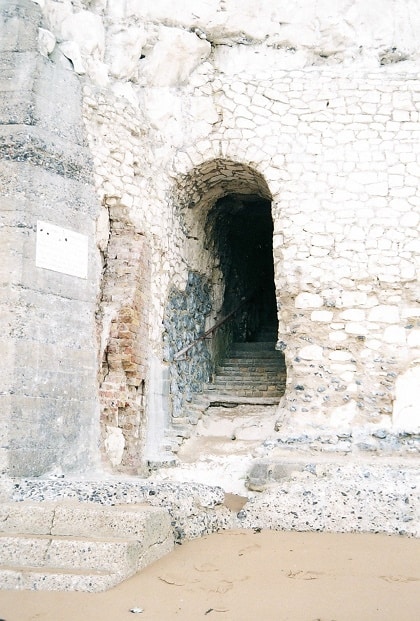 When you consider a remote villa (as it would have been in 1914), the capture of a German spy in the area and a set of hidden steps leading down to the shore, it’s not surprising that John’s writer’s mind got to work.

Much of the book’s action takes place in Buchan’s native Scotland but in the final chapter, “Various Parties Converging on the Sea”, the story’s denouement shifts to the fictional town of Bradgate.

The chapter opens with Hannay having breakfast at the Griffin Hotel, looking across “a smooth sea to the lightship on the Cock sand”.

Like any good writer, Buchan renamed the places he used. The Griffin Hotel is the Royal Albion Hotel. The North Goodwin Lightship becomes that on “Cock sand”, the sands themselves are the Goodwin’s and Bradgate is Broadstairs itself.

And there are other local references: “the Ruff” matches up nicely with North Foreland and when Hannay sees a “young man on a bicycle, with a bag of golf-clubs slung on his back” this no doubt was inspired by Kingsgate golf course.

But one question remains. Why 39 steps? One theory is that a friend of John’s suggested halving the number of the original oak steps from 78 to 39. Buchan also celebrated his 39th birthday while staying in Broadstairs. In truth, no one really knows. Not even John, himself, gives any indication in his memoir Memory Hold the Door.

Buchan continued working on his story after he returned to London. The Thirty-Nine Steps was published the following year by William Blackwood and Sons.

When the oak step were taken up, a St Peter’s carpenter made three sets of bookends from the woods still sound. One pair went to the then owner of St Cuby, another to Alfred Hitchcock (who directed the first screen adaptation in 1935) and the third to John’s family. On each was a silver plaque with the inscription: “Made from one of the original 39 steps”.