A complaint has been made to Thanet council about the cutback of hedgerows across the isle.

The group is asking why hedgerow has been felled at the former Christ Church University campus at Westwood and also ‘heavy’ cutting back at Margate Winter Gardens – pointing to the discovery of a bird nest among the cuttings.

In a letter to the council Ms Gregory says: “Why is TDC decimating shrubs across Thanet during peak nesting season, despite advice from many different bodies to avoid all cut backs of hedgerows during this season unless urgent? Why has this been deemed urgent?

“Why have the hedgerows such as the one at Winter Gardens been so heavily cut back? What is the TDC policy regarding the maintenance of wild spaces for bird habitat? Why has there been no discussion with the public over how this space should be maintained and looked after – who makes these decisions?“

The group say there is evidence of nesting at the Christ Church site and that this has been reported to Kent Police’s Wildlife Crime Unit.

Thanet council say nesting birds have not been seen during council assessments of the site.

A council spokesperson said: “Thanet is lucky to have a wealth of open spaces and we employ a dedicated and experienced team to manage their upkeep. As part of its work, our Open Spaces team carries out regular maintenance to trees, hedges and shrubs on land we own.The vast majority of this work is completed during the winter and therefore outside of recognised nesting seasons.

“At any time of the year, before starting any work a member of the team will visit a site in person and conduct a thorough visual survey i.e.looking for active birds’ nests. In the event that there is evidence of birds nesting in the areas scheduled to be cut back, this work would be postponed until further assessment could be made. 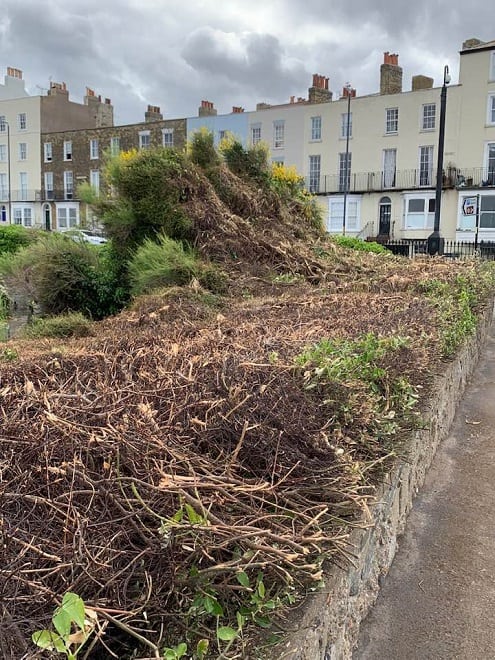 “At the Kent Innovation Centre, in Broadstairs, nesting birds have not been seen on any occasion during the team’s assessments which have taken place over the past two years. Similar assessments were made on the hedges in the vicinity of the Winter Gardens in Margate.

“The decision to undertake work of this nature during this particular time period is based on issues raised by stakeholders using the affected spaces, including the need to mitigate against health and safety risks, particularly in relation to members of the public for whom our duty of care is paramount.

“Bearing in mind the levels of overgrowth it was not possible to cut these hedges back manually. We engaged experienced, qualified and accredited contractors who conducted further examinations before commencing work and would also know to cease activity if evidence of active nesting birds were spotted. It is anticipated that at this time of year, re-growth is likely to appear quickly improving the appearance of the site.

“There are no further scheduled cutting back of hedges planned, however if we are served a notice by the County Council or have a health and safety issue reported to us we may have to carry out necessary works during summer months, but as always following guidance to ensure minimal disruption to wildlife.

“We appreciate that this is an emotive issue, and can assure residents that there has been no intention to displace wildlife that contributes to our wonderful bio-diverse natural environment.”

Other areas of concern raised by the group include maintenance at Dell Gardens, cutting back of the tamarisk hedge bordering the bowling lawns at Walpole Bay and why there is currently not a tree warden for the isle.

Ms Gregory added: “Thanet has just 4.4% tree coverage, one of the lowest in the country. We have lost 50% of our wildlife in 50 years – largely due to industrialised agriculture such as that across Thanet. We have to protect what trees and green spaces we have left, as much needed wildlife havens.”

The group say despite council funding cutbacks cash is ‘wasted’ on the port instead of being used to preserve open spaces and wildlife which “will bring in tourists and create happy and prosperous towns.”