Broadstairs suffered their third defeat of the season in a match that they will reflect on as one that was there for the taking. The visitors Hayes CC wont the toss and elected to bat on a dry pitch that looked to be full of runs.

The opening bowling partnership on Masoud Rangin and Bradley Ellison quickly got into their stride, with Rangin bowling overseas Yabsley in his first over. While Ellison (10-3-17-1) kept things tight throughout his excellent 10 over spell, it was Rangin (8-2-36-3) who would claim the next two wickets, Buttery being caught behind by Jack Wheeler and Askew being dismissed with an outstanding one-handed catch by Alex Hogben. Ellison claimed the wicket of Cauldrey late in his spell and at drinks, the Seasiders had reduced Hayes to 84-4.

Revitalised after the short break, Broadstairs continued to make breakthroughs with Chris Kidd trapping Bamber LBW, just after he had reached his half-century. With the score on 108-5, three further wickets were to fall without Hayes adding to the score with Matt Frewin (10-2-33-1) claiming one and Kidd (7-1-52-3) a further two including a sharp catch by Jamie Dewell. Hayes were now on the ropes and Broadstairs had the opportunity to see of the match. However, Eddicott, batting at number 8, was to shift momentum back to the visitors with a display of explosive boundary hitting, reaching 50 off just 20 balls. Chris Flint (10-2-33-1), coming on for a second spell, removed Marlow with Hogben taking another catch and Eddicott was finally run out by Callum Morgan for 71. Although the Hayes total of 183 was still not out of reach for the hosts, the 68 runs put on for the 8th wicket put a serious dent in their chances. 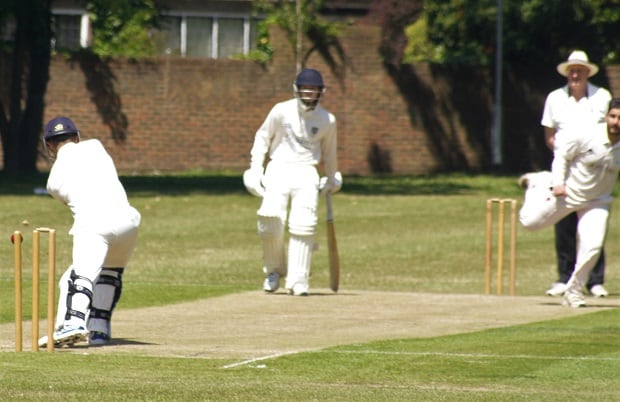 Openers Flint and Wheeler started off purposefully, putting on 28 in the first 5 overs. However, they would each succumb in quick succession, both falling to Eddicott – Flint (18) caught and Wheeler (13) LBW. This turned out to be the highest partnership of the Broadstairs innings and the demise continued with Morgan (2) and Hogben (9) being trapped LBW in quick succession. Only Frewin offered some hope of a successful run chase but when Harry Wise was removed after a stubborn 4 off 18 balls, Frewin was beginning to run out of partners. A quickfire 20 from Dewell (20 off 12 balls) and a dogged 5 off 20 balls from Alfie Huntley were not enough to keep hopes alive. When Frewin was eventually bowled by Cauldrey for 37 and the reply on 136-8, it would be down to Kidd to mount a final assault with the remaining batsmen Rangin and Ellison. In the end, the challenge was too great and Broadstairs finished on 154, 30 runs short, with Kidd 21 not out.

Despite the disappointment of the defeat, Broadstairs should take some encouragement that the match was there to be won against a team that are unbeaten so far this season. They will hope to have shored-up their batting by the time the two teams meet again later in the season.

This week, Broadstairs travel to Folkestone who are one place above them in Division 1.

Broadstairs 2 XI travelled to Beckenham with the team morale high following the great start to the season. Broadstairs knew that a win against Beckenham would be difficult with the hosts being one of the stronger teams in the league. Beckenham won the toss and opted to bat in what was an absolutely beautiful day for cricket, if not a little too hot to be fielding first.

The new ball was given to McCormick and Fox. McCormick getting the breakthrough with the 4th ball of the innings, a caught and bowled. Beckenham consolidated and with value for shots on a fairly small ground, the score progressed quickly. Fox was unlucky not to pick up a wicket when the batsman hit one to mid-off and was put down. McCormick picked up a second in the 11th bowling the other opener and the score was 51 for 2. Fox was rested after 6 and McCormick finished his spell with figures of 39 for 2 off 10 overs. George Kidd replaced Fox, taking a wicket in his 6th over (LBW). Beckenham were still scoring freely and picking the gaps in the field. Joe McCaffrey took over from McCormick, bowling with control and was unlucky not to pick up any wickets in his 10 over spell. Joe finishing with figures of 55 off 10 overs.

Ellison replaced Kidd and with the help of Fox at point, picked up the 4th wicket caught. With the score on 200 for 4 off 34 overs, Broadstairs were staring down the barrel of a 300 plus score. Ellison and McCaffrey kept plugging away with Ellison picking up his 2nd caught by Hardy and finishing his spell with figures of 66 for 2 off 10 overs. Fox came back to finish his 10 overs and got a wicket caught in the deep by McCormick, finishing with figures of 55 for 1 off 10. Kidd also bowled in the last 5, picking up a 2nd wicket caught Hardy and finishing with figures of 2 for 64 off 10. A good effort in the field by Broadstairs and restricting Beckenham to less than 300 off their 50 was a great achievement.

A mention of a decent tea and a welcome break in the shade before we started our chase.

Tom Marshall and Lewis Hewitt opening for us, with Tom getting caught off the leading edge. Lewis hit a couple of lusty blows, before being bowled and we were 22 for 2 off 4. Kidd and Fox taking the reins and both looking solid in defence and punishing the bad ball. Kidd was next to fall in the 12th with the score at 57. Matt Hardy joined Nathan Fox and the pair of them advanced the score to 180. A solid partnership, unfortunately Fox falling for 93 when the ball got big on him and he spliced it to mid-wicket. James Bond joining Hardy at the crease, unfortunately out LBW leaving us 182 for 5. With the equation at 105 needed to win off 12 overs, we were still in the game. Andy Marshall and Josh Marshall falling cheaply and we were 206 for 7.

Hardy was next to fall for 73 and the chase was all but lost. McCaffrey and McCormick taking over and with a few boundaries, the score progressed, McCormick being bowled and Ellison taking over. In the end Broadstairs fell short being all out in the last over for 256. A fantastic effort by the team.

All in all, a great day of cricket played by both teams under beautiful blue sky. Even though Broadstairs lost, we still have lots of positives to take away from the game. A difficult choice for Broadstairs man of the match with some good individual performances, with Nathan Fox taking it. A mention for Matt Hardy as he comes a close second for his solid 73