And if you want to know what it is all about our columnist Melissa Todd and pal Jenny de Freitas went along to the last performance.

Here’s what Melissa thought of it: 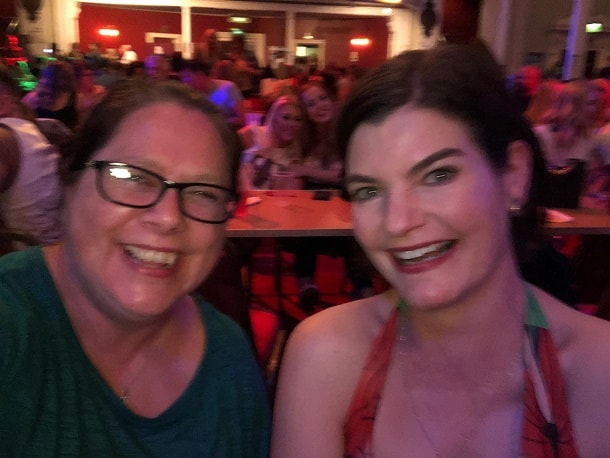 I’d been to Bongo Bingo before, and loved it. Not in an ironic way, you understand: I actually, properly loved it. I like glitter, unicorns, cheesy tunes and leaping about, and you may judge me all you wish. So when I heard the Bongo boys were heading back to Margate I suggested to my friend Jenny she could pop along to the Winter Gardens with me.

Jenny lives in Sheffield, so perhaps ‘pop’ isn’t quite the verb. Slog, perhaps; trek, trudge, grind. But she agreed, the suggestible tinker, as did local girl Barbara, and another stalwart pillar of the Thanetian community, who, embarrassed by how much she enjoyed herself, wishes to remain anonymous, and shall hereafter be referred to as Keith.

We arrived at Margate at 11am  to explore some drinking dens.  The games don’t start until 8pm, but they get you there at 6pm to hype you up and make you spend on wine. Unless you’re us, sensible, middle aged and already drunk, when instead you elect to have a little power nap on the table. Around us, 500 odd people poured into the Winter Gardens, all screams and sequins. “It’s like being on one mad giant hen do!” Jenny roused herself to observe, as beside her a boy in tiny tight shorts leapt on his chair to grind through Barbie Girl.

At 8pm a demonically handsome chap named Jimmy Sweets burst on to the stage to warm up an already sweaty crowd and explain the rules of bingo. Turned out, most of us didn’t have a clue what we were doing. (Spoiler: it’s really, really easy). 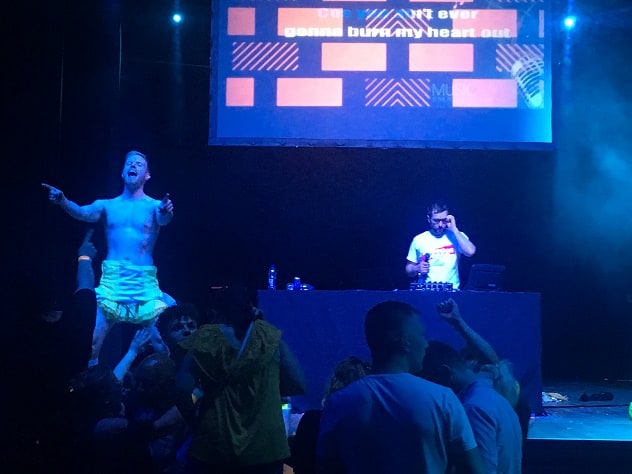 He was soon joined by two equally handsome chaps in stockings and petticoats, who cavorted for our entertainment all night long, and I tell you, whatever they pay them, it’s not enough. How they sweated and skipped for our pleasure; how eagerly and raucously we expressed it. They danced and beamed harder the more we squealed; impossible to know whether audience or bongo-pros enjoyed their night more.

“Those boys on stage have got lovely legs”, Keith admitted, blushing to be caught objectifying male flesh so shamelessly. I patted her hand, then stood up to dance. There’s a lot more dancing and singing than there is actual bingo, and there is plenty of bingo. You’re almost sorry when the tunes stop and the number calling begins. (Keith: “This is better than a nightclub, because you get a sit down every few minutes!”)

The prizes start fairly small, and yet oddly, instantly desirable – a cardboard cutout of David Schwimmer, a dinosaur costume, two boxes of cocoa pops. Each game also offers prizes of booze and cash, from £50 to £500.

And as the night goes on, the prizes and tunes get better. A Henry Hoover, a giant fluffy unicorn, a karaoke machine we trialled collectively with a scorching rendition of Teenage Dirtbag. At the end of the fourth game the lights go down and glowsticks are thrown among us for a sticky fifteen minute rave. For the sake of our shyer companions Jenny and I elbowed our way to the front to objectify at closer proximity: we were happy to report back that their legs are indeed lovely, as is the rest of them. 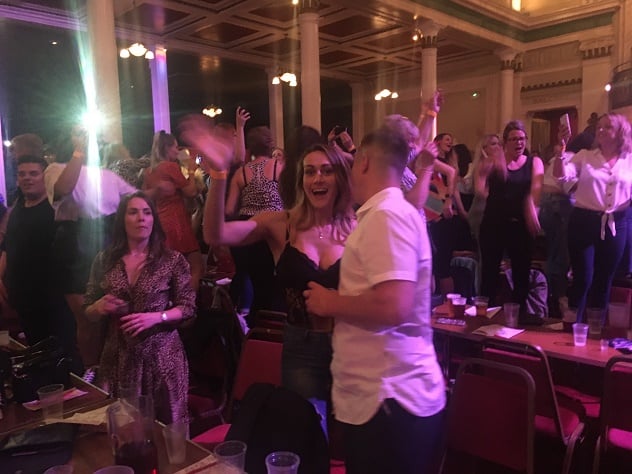 “This is so brilliant!” Keith said. “I love to see people enjoying themselves!” By which remark I assumed she, herself, was not, yet quite soon I clocked her pointing and yelling “Shame! Shame!” at the poor fool who erroneously called Bingo a number too soon, then throwing some athletic, visually stunning shapes to Gangster’s Paradise.

Two players called “House!” for £250, and had to endure a dance off for their prize, while the rest of us screamed our approval. Barbara was only one number away from £500; how my heart hammered, thinking what a fine end to this column it would make if only she could win. But, alas, another girl got there first.

“I honestly don’t care!” Barbara said. “It’s still the best night out I’ve had in years!” The prizes all distributed, the boys kept dancing. They stripped to It’s Raining Men, covering the sweaty crowd in water spat from their own beautiful lips.

“It’s only 212 days to Christmas!” Jimmy yelled, “So let’s have some Fairytale of New York, and you proper go for it! Did you know if you sing while you wave your arms in the air it makes you feel amazing?”

So I tried it. As did Keith. And Jenny, and Barbara, hip to sweaty hip, in sisterly solidarity.

And you know what? It does.