A film star has been on show in Margate today (May 25) – the Union Jack Scooter from 1979 film Quadrophenia.

The scooter was on display and accompanied by its owner Royston Edwards. with Max Aldous and Laura Dickson.

Originally hand painted to celebrate the Queen’s Silver Jubilee in 1977, its claim to fame came in 1978  when Royston rode it, as a film extra, in the cult movie, released the following year.

Since that time the 1963 Lambretta TV200, bought for Royston by his dad in 1969 for £25, has also been used by The Who at various events, appeared on album covers, had a ‘reunion’ with Roger Daltrey at Knebworth in 1984 and been used on various photoshoots.

The Lambretta is the only original scooter left from the film and is the same mint condition today as it was in 1978.

The Mod and Sixties weekend runs until the end of tomorrow (May 26) and is headlined by the Spitfires, Graham Day and the Forefathers, and Big Boss Man and The Baron Four. 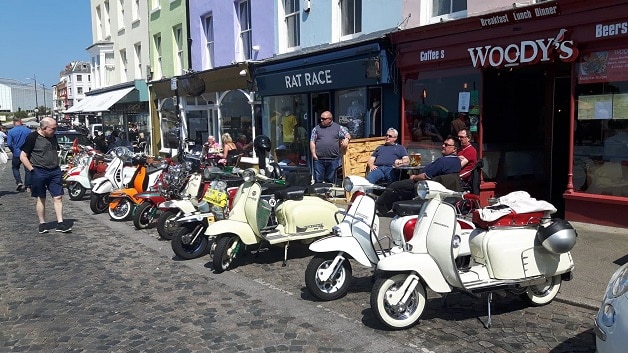 The venue hosts three spaces including  the soul café and The Dug Out basement club room.