Fears that the isle is being stripped of its trees has prompted a Thanet group to call for a dedicated council officer to be put in place.

Thanet Trees, which was set up in January 2018, says there are concerns that development at sites such as Westwood Lodge will see the felling of a large number of healthy trees.

The group met last Saturday (May 18) to discuss a plan of action.

Thanet has one of the lowest tree canopy covers in the UK, at just 4.4% and the group says fellings are taking place at “an alarming rate.” 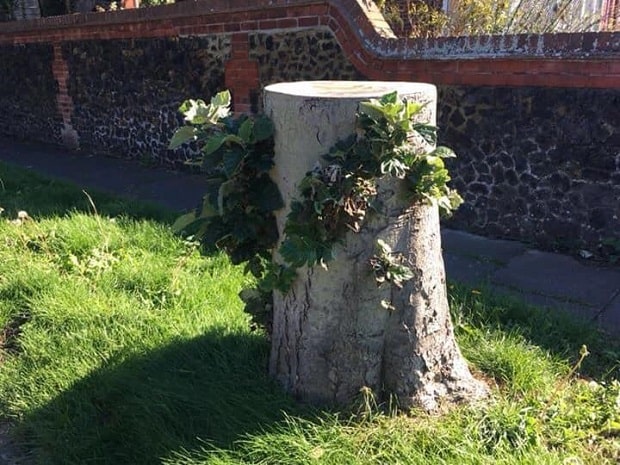 Spokesman Amelia Gregory said: “We have multiple concerns and issues that our energetic group have agreed to work upon. Of top concern is the lack of an official tree officer at Thanet council, who is able to help protect our trees.

“The planning portal on the website is woefully inadequate, difficult to use and often unavailable, making it incredibly hard to check up on trees that are protected with a Tree Protection Order (TPO). Despite repeated requests to check up on possibly felled trees which are meant to be protected by a TPO, emails are unanswered. 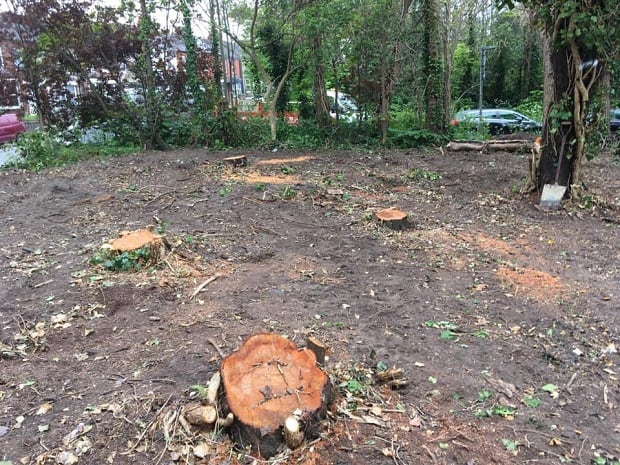 “Our questions about what has happened at Tivoli, where we believe woodland has been felled without an adequate wildlife survey, remain unanswered. An FOI request was submitted to find out how this previously council owned woodland was sold for development, despite having a covenant on it that stipulates it remain green community space for the people of Margate. The FOI remains unanswered.

“We question who is making decisions such as that to allow the felling of a veteran Horse Chestnut tree in full blossom last week at Councillor Simon Day’s house in Birchington, to make way for a one car garage. We are told  the lopping of one limb was deemed adequate by the tree surgeon responsible. Veteran trees are woefully rare in Thanet and should be protected as magnificent entire ecosystems. 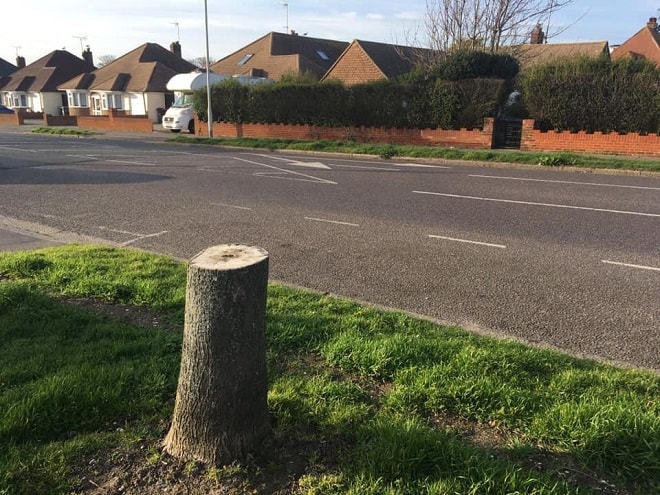 “Our streets are littered with sad stumps where trees once stood. Kent County Council is responsible for street tree planting but do not seem to replace many of the trees that are felled.”

‘Within rules and guidelines’

Tivoli site co-owner Ernest Biela said: “The tree clearance at the site at Tivoli Road has been conducted entirely within the rules and guidelines laid down.

“Indeed David ( Watts -co-owner) informs me that he has had several meetings with police officers and council  officials on site, and there has been no objection to the clearance activities

“Although some people have raised objection to clearing the grossly overgrown site, many local people have also attended the site and brought their own tools to help the clearance. They have taken timbers away to use as raw materials for artistic creations in the increasingly expanding local arts scene.

“Having cleared the site, David is hoping to replant on site to yield produce for eateries to complement locally sourced seafood and enhance the local food scene with entirely Margate derived menus.”

Cllr Day says the tree at Mount Lavina was dying and in a dangerous condition. He also says the group is incorrect in the assumption that he was responsible for its felling.

He said: “The tree was brought to the attention of the residents of Mount Lavina by the neighbours who had had it inspected and were told it was in a dangerous condition. The management association then approached a tree surgeon to confirm this.

“The tree was confirmed as dangerous and dying and an application was made to the council to remove the tree. This is the point that the Thanet tree group should have made their comments.

“The tree surgeon showed one of the Thanet Tree members the diseased part of the tree and let them take photos, these were not put up on their site.” 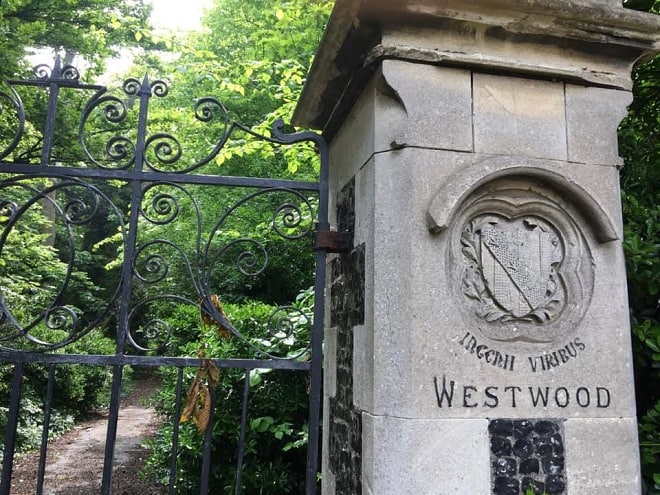 Planning permission was granted, by appeal, in 2017  for development of  153 homes at Westwood Lodge in Poorhole Lane.

The original application in 2015 was rejected by Thanet council. Among the reasons for that decision was concern at additional pressure on Sandwich Bay protection area and: “The proposed development would result in a significant incursion of the built form into the green wedge, which would reduce the separation between settlements and result in a substantial loss of openness and established woodland habitat.”

Former TDC tree officer John Hammond submitted the view that: “It is obvious that there will be significant loss of tree cover in an area of Thanet that is desperately short of trees.

“During our visit there were many species of bird present, some of which were once considered common but are now increasingly less common due to the loss of this type of habitat. It is my opinion that the loss of tree cover on this site to development would impact hugely on the local bird population.” 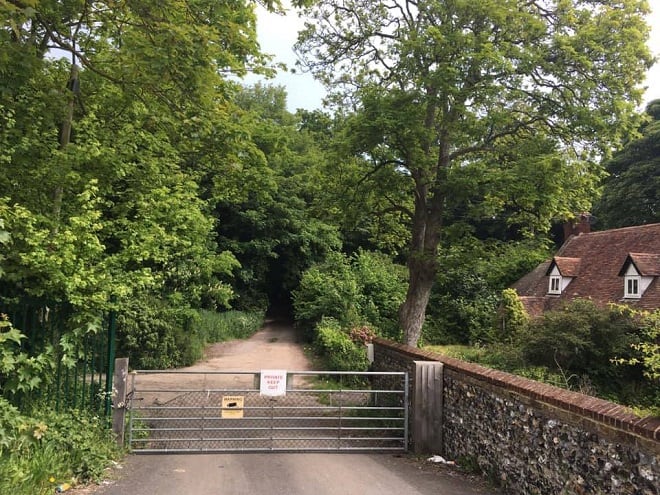 However, the Planning Inspectorate decision states Thanet council’s case was weakened by a lack of a 5 year housing supply plan. On the issue of green wedge the inspector found: “further loss of trees within the site, and the introduction of additional dwellings, would be partially visible. However, as the woodland visible along the northern and eastern site boundaries would be largely retained its distinctive landscape qualities would not be prejudiced.”

The plans, submitted by Westwood Cross Developments Ltd, would mean the felling of 150 Category C sycamore trees. However, the proposal also includes plans for the planting of 450 trees of native species, including semi-mature specimens.

Work on the development is yet to take place. 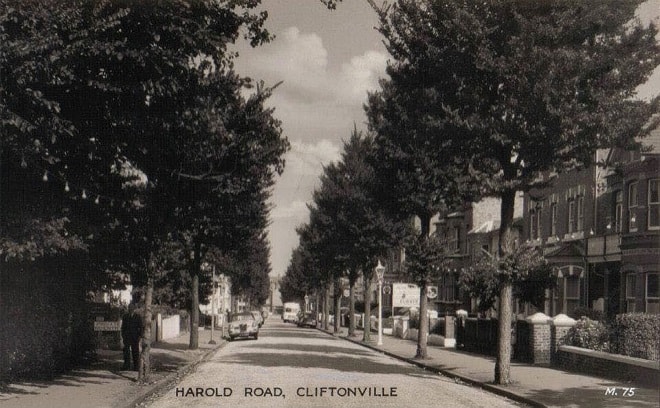 Thanet Trees say the woodland acts “ as the lungs of Westwood Cross,” and want to see the Planning Inspectorate decision challenged, pointing to the launch of the Urban Tree Challenge Fund  by Environment Secretary Michael Gove, who said more trees must be planted across the UK to mitigate the effects of climate change.