The axing of Kent County Council grants in favour of contracts has been blamed for the decision by Age UK Thanet to close its venue in Broadstairs.

The community hub at Bradstow Court in Rumsfield Road will shut on May 23. In a letter sent to service users, chief officer Vanessa Wood says a rent increase and “the impending cessation of our KCC grant” has forced the decision to move the service to Margate’s hub at Zion Place or for people to use facilities at Copperfields in Newington instead.

One person currently attending the twice-weekly sessions in Broadstairs said: “We discovered that Bradstow Court only wanted to put the rent up by £10 a session. At least eight of us have offered to put in another £1 a time to carry on here, but Age UK won’t listen.

“It’s ridiculous because some of us have to come by taxi and it will cost much more for us to travel all the way to Margate. Why can’t we just put in the extra and stay here?“

Mrs Wood says transport and meals will be available as well as increased opportunities for activities and day trips but the loss of funding means plans have to be made to keep Thanet services viable.

Kent County Council is changing the funding for services, including those for older people, from grants to contracts which will have to go through a tender process.

Age UK can bid for the contract but success is not guaranteed.

Mrs Wood said: “We can’t continue at Bradstow Court because they have put the price up but we have given out different options.

“Kent County Council is stopping our grant from next March s as the chief officer I have been doing everything I can to make sure we are sustainable. We need to have plans in place to make sure everyone is still looked after and we carry on the services we have as well as opening new ones.

“The tenders mean all voluntary services are now competing for the same pot of money even though we are also trying to work in partnership and look after each other.

I know this is very unsettling but we need to make tough decisions. We need to look after everyone including our staff and paying expenses for our wonderful volunteers.

“Other organisations have also been affected by the changes to grants. Those that deal with the funding need to realise the impact it is having on local communities in Thanet, an area of deprivation which needs to be able to offer support.” 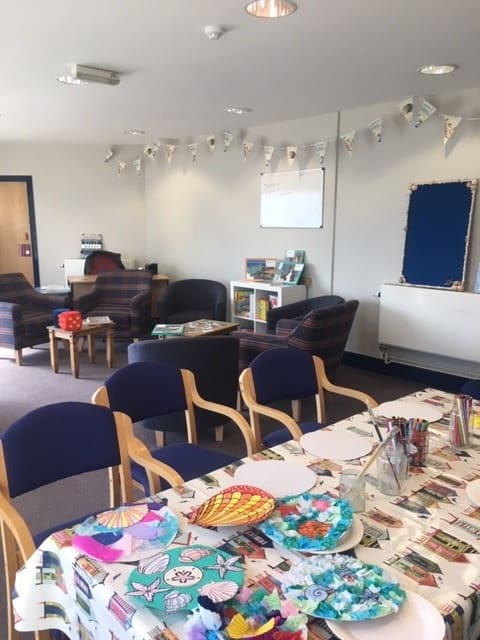 Mrs Wood says all those at Bradstow will be trying out services at Randolph House in Cliftonville, which has also recently opened its Seashells dementia room. The aim of that service is to support those living with dementia to remain as independent as possible.

The room opened on May 10. Sessions include lunch, music, hobbies and interest.

The centre also runs an intergenerational scheme, working with schools such as Cliftonville primary, a ‘chat and chew’ session for older visitors and children and is due to open a new bistro at the Zion Place building.

A Dementia Empowerment Day will be held at the centre on Saturday, May 25. The event, between 10am and 2.30pm, is open to the public to come and speak to different organisations about dementia and the support that is offered in Thanet.

There will be live entertainment and a free buffet.  The day has been sponsored by CareMark Thanet.

Find out more about Seashells and other services here

In the 2018 end of year statement the Thanet Age UK trustees say: “In the coming year Age UK Thanet will be facing major changes to the way we are funded due to KCC stopping the grant funding.

“We are striving to ensure our services become financially self-sufficient. Other factors including the rise in the national living wage and work place pensions will also have a major impact to our costs. This will have to be reflected in our pricing strategy. However, we still remain committed to meeting our communities changing needs to ensure that services remain available.”

Income is also raised through donations, legacies and trading -such as through charity shops.

Talks between Thanet Age UK about the sale of its site in Zion Place to Aldi were put on hold earlier this year.

The organisation has been based at Randolph House since a transfer of the land from Thanet council in 1996 which coincided with the sale of adjoining plots to Aldi and Stanley Casinos.

Earlier this year Kent County Council sent letters to providers of services for older people, people living with dementia, people with sensory impairments and people living with a physical disability, to inform them of the proposed change to contracts.

A spokesman for Kent County Council (KCC) said: “KCC currently funds a number of voluntary organisations across the county, including Age UK, through a grant system, of which some are awarded on an annual basis. There are some historic grants which fund services to older residents, people living with dementia, people with sensory impairments and people living with a physical disability. Support includes befriending, voluntary transport and day care.

“The historic nature of these grants means that there is an inequity of funding and service provision across the county. KCC policy is clear all grant and contracting arrangements should be awarded through an open application process; these grants however are not compliant with that policy.

“The council has been working to design a range of community-based services for the future which will be funded through new arrangements over a longer period of between five and six years. Services will be focused on enabling people to remain well and independent.

“This will give commissioned providers long term financial stability, support development and innovation in services and ensure the performance of services can be monitored more effectively. This will mean all historic grants will come to an end by March 31, 2020.”