A Minster primary eight year old is hosting a charity fun day this month in aid of three causes.

Caitlin Goddard won the titles of Mini Face of Thanet and Miss Congeniality last year and entered the Face of Kent and South Coast pageant on May 12 in Ashford to win a place at the Face of Europe and the World competition at Disney. Caitlin won the Face of Kent junior category. As part of her role Caitlin has been raising cash for charity East Kent Headway. She has now added Sands –  Stillbirth and neonatal death charity – and the Dorset Childrens’ Foundation to her list of causes and will be hlding the d=fundraiser atSt John’s Church in Margate on May 25.

The event, from 11am to 3pm, will include stalls, a bouncy castle, sweets, cakes, clothes, sand art, gifts, face painting, glitter, hair, princesses, superheroes and lots  more. There will also be coffee and tea, raffles and a food stall. Skylar will also be attending.

Entry is £1 and free for under-threes. 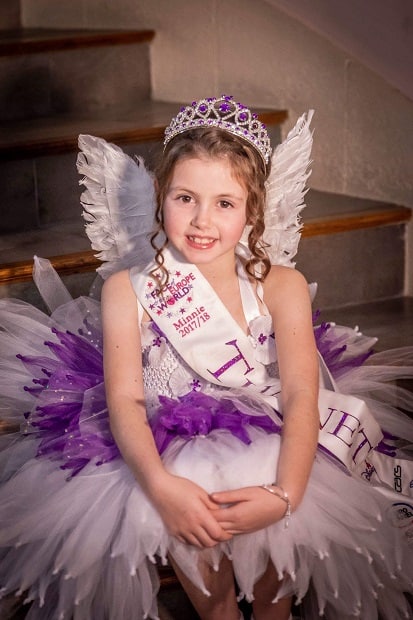 Mum Rebecca said: “Caitlin aims to raise a lot of money for a few charities this year. She raised over £600 for various charities last year but now has a lot more experience and plans lots of events over the summer holidays.

“She is also attending the Thanet’s Got Talent finals in June to award people their prizes and will be attending the Minster summer fair in July. Caitlin plans to travel all over and will be off to Liverpool on May 30 for a charity pageant which she’s raised over £300 for up to now.

“Caitlin is looking for sponsors and has been approached by Little Gem logistics removal company who travel all over the United Kingdom to help people in need.

Caitlin is also holding a charity party at the Vale Tavern in Ramsgate on June 15 from 1pm to 3pm. The event in aid of Headway East Kent and sponsored by the Vale Tavern will include food and soft drinks. There will also be a bouncy castle, rides, music and face painting. Tickets are £5 per child (adults free).

Find out more on the sisters’ facebook page here