From pulling pints to serving up afternoon tea, Pat and Len Corby have been a Ramsgate institution for some 35 years.

The pair, who came to the isle to run the George and Dragon pub back in 1984, are a part of the fabric of the town’s hospitality trade and community.

With seven years at the George and Dragon, 15 at the Elephant and Castle and almost 20 years at Corby’s Tea Rooms the couple have fed and watered thousands of people.

But now the great-grandparents-of-four have shelved their teacups and saucers to embark on a well-earned retirement.

At the end of the 90s, Pat and Len, originally from Bermondsey, decided to branch out from the pub trade and fulfil Pat’s dream of being at the helm of an old-fashioned tea rooms.

Pat, 72, said: “I wanted to do something different and unique in Ramsgate, not a café but somewhere nice and a bit different for people. There was nothing like that in Ramsgate.”

And so from the ashes of York Street, literally, Corby’s Tea Rooms was born.

In the early 1990s there was a huge fire on the eastern side of York Street, opposite what was once Tesco, destroying all the properties between today’s Hovelling Bat and The Crown pub. The area lay derelict until Thanet council began a project to create commercial premises and refurbish Charlotte Court. At the end of the decade the scheme was complete and Pat and Len became among the first to open a business there. 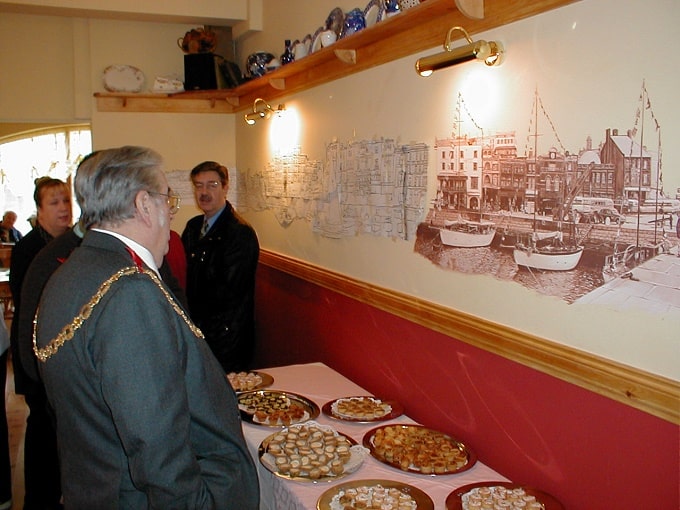 Len, 72, said: “It took six months to refurbish and a year  for artist Stephen Beech to create our five old Ramsgate murals.”

Furnished with simple but robust pine furniture and displaying tea-making ephemera indoors plus tables and chairs in the courtyard, the tea rooms were ready for the first customers in 2001.

The business, which became a magnet for others and generated footfall in the street, has spent almost two decades serving good quality, affordable food and attracted regular clientele who have become firm friends of the couple.

And the decades haven’t all been about business. The pair have been involved in hundreds of charity events, from Jubilee party celebrations to helping under-privileged children and, on one occasion,  Pat and the Ladies Auxiliary raising £42,000 for QEQM Hospital by putting on a Spice Girls show -complete with outfits.

Pat said: “We got a letter from the Queen Mother for that, a car turned up at the Elephant and Castle and we were presented with it!

“I’ve always been involved with raising money for charity and being part of the community, part of the mayor’s committee, we just love Ramsgate.

“I’ve enjoyed every minute of it. We will really miss our customers and all our friends from the community and want to say thank you to them all, especially Derek. He is our oldest customer, at 93, and has been coming here every single day since we opened! He is our most loyal customer and he is lovely.”

The couple were presented with a framed Ramsgate crest by (prior to the election) town mayor and mayoress Trevor and Mandy Shonk and town sergeant Mac Wilkinson on April 24, the day before their last at the business.

Corby’s Tea Rooms remains open and has been bought by Ramsgate couple Paul and Sue Crush.