A man has been arrested for assault after police were called to a car stuck on Margate Main Sands today (May 3).

The vehicle was wedged in the sand at the Nayland end of the beach with the tide coming in.

Two police cars, an AA van and a dumper truck were on the scene trying to pull the vehicle free. Helping the efforts was Xander Muir, who runs the double-decker bus  café at Nayland’s Royal Crescent Promenade with Simon Lindley, Jodie Ellena and Lois Du Plessis.

Simon, who was at the bus cafe, said a family were stuck in the car, the dad became irate and allegedly threw a child in the sea. 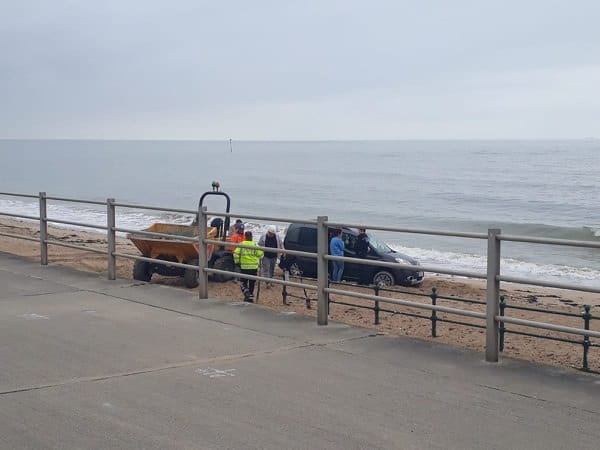 A Kent Police spokesperson said: “Kent Police received a report of a man causing a disturbance on the beach near Royal Crescent in Margate at 10.03am. The caller also reported a vehicle had become stuck in the sand.

“Officers attended and a 25-year-old man from Bromley was arrested on suspicion of assault. He currently remains in custody.”

The vehicle has since been recovered.