Birchington mum and district election candidate Suzanne Brimm is urging people with medical issues that make toilet facilities an urgent essential to sign up for a national card.

The mum-of-two is highlighting the Just Can’t Wait card which, while not guaranteeing access, is nationally recognised and can help explain and avoid a potentially embarrassing situation quickly, allowing holders to use toilets in businesses and other locations.

The recommendation comes on the heels of news that the public ‘Clock Tower’ toilets in Margate are likely to remain closed throughout the Summer due to structural problems.

A review of Thanet’s public toilets is also being carried out with a suggestion of a business-led community loo scheme being mooted. The review is part of ‘efficiency saving’ plans which have also included a ‘restructure’ of coastal/tourism and operational services at Thanet council. A consultation on up to seven posts at risk, including that of Thanet Coast Project officer Tony Child, ended yesterday (April 11). The outcome will not be known until after the Easter break.

A petition urging Thanet council to retain the coast project role has been signed by more than 2,000 people. Find it here 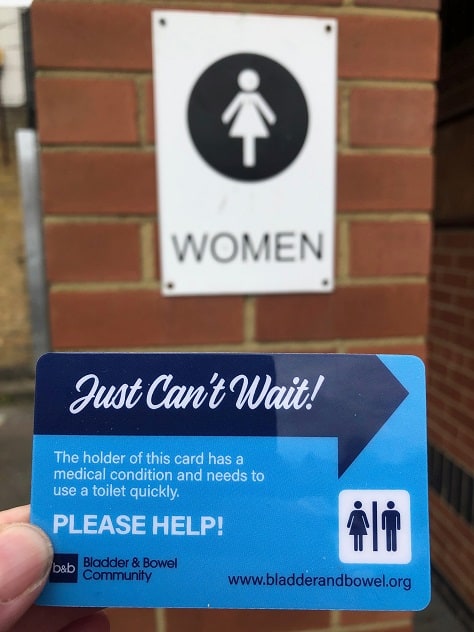 Suzanne, who in 2016 worked for six months to get repairs done to Birchington toilets so they could be reopened, said: “The advantage of having one of these cards is that it is nationally recognised and allows holders to use the toilet facilities in shops and other locations that would not ordinary allow members of the public to use them.

“People that suffer with bladder and bowel problems including diabetes, urinary stress incontinence, prolapse, cancer, IBS and Crohn’s disease  need to use the toilet quite quickly, therefore keeping public toilets open is essentially very important and a basic necessity.

“These cards giving access could make a massive difference to people’s lives, it is so important to have access to toilets.”

The cards are free and are available from health groups including Bladder and Bowel Community.

There is also an iOS phone app available.

A petition urging Thanet council to reconsider toilet closures reached more than 1,000 signatures but the format was deemed invalid for the authority to accept.