From Saturday people will once again be able to take a ride on the open-air top deck of the number 69 bus.

Running the same route as last season between Ramsgate Boating Pool and Broadstairs Stone Bay, the open-top bus will operate at weekends up to September 29 and everyday during school holidays.

Joel Mitchell, the new managing director of Stagecoach, said: “Thanet has an incredibly vibrant seaside culture with so much to see and do. We’re proud to offer something that’s become a big part of that. Our drivers live locally and know the route by heart. They are part of the community and take pride in providing such a special attraction for locals and visitors.”

Tickets are £2 for an adult single and £1 for a child single. 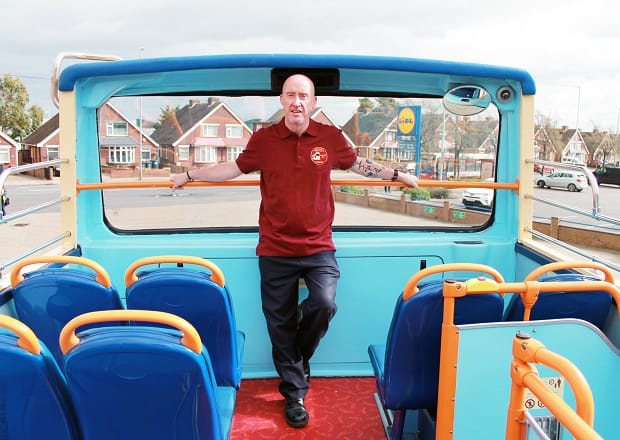 Stuart Draper has been driving the open-top since Stagecoach resurrected the service in 2016. He said, “The great thing about the open-top is that people can hop on and off as much as they like and come back another day and experience it in a different way.”

Stuart began driving buses in 2003 and is one of two regular drivers on the open-top route.

What do you think the open-top bus offers people?

“It offers something unique for locals and tourists. The views are stunning; you get a great view of the coastline from the top deck. It makes a really fun day out.”

What’s your favourite place on the route?

“There are great views along the whole route but if I had to choose a favourite I would say it’s the 90 degree turn in the road at the end of Dumpton Gap. The bus looks out over Viking Bay at the harbour – it’s breathtaking.”

What’s the strangest thing that’s ever happened to you driving a bus?

“Once when I was driving route 32 a herd of about eight large horses came like a stampede from a field right across the road in front of the bus. They charged off towards Northdown House as quickly as they appeared!”

What do you look forward to most about driving the open-top bus?

“Over the past three years on the open-top I’ve met so many regular passengers. They’ve become familiar faces and I look forward to seeing them when the season starts. Everyone loves the bus ride and great to be delivering an experience that makes people feel happy.”

Timetables are available at local outlets, at bus stops and online at www.stagecoachbus.com.