A chance metal detector find in Manston one cold morning in January has led to extensive research revealing the last moments of a wartime pilot and a presentation at the Spitfire and Hurricane Memorial Museum.

Detectorist Trevor Benson, with the consent of the farmer, was in the area known as “The Shallows”, when he discovered a gold cufflink, engraved with the Royal Air Force crest and the initials “J.R.B.W.”

Trevor showed this John Vaughan, a friend and historian who manages and is editor of The South East History Boards, an online history forum. The search to find out more about the cufflink and its owner then began.

Initial research  by forum members focused on the cufflink and examination of the hallmark and other markings, provided some useful information.

After careful cleaning all of the symbols could be discerned, and they revealed the maker was Payton, Pepper & Sons Ltd. of Vyse Street, Birmingham.

The cufflink is of 9-carat gold, the anchor symbol denotes Birmingham, and the letter J in the cropped square dates the piece to 1858-59.

It can be assumed that it was a family possession that was later engraved as a gift for Rex White, but that is impossible to prove.

John checked the initials against the database of casualties held by the Commonwealth War Graves Commission and it was soon discovered that they matched those of a Sergeant Pilot who lost his life on  July 3, 1940, when his Spitfire crashed in ‘The Shallows’.

Further detailed research involved visits by John to the National Archives at Kew, extensive research with the Air Historical Branch of the Royal Air Force, the British Newspaper Archives and a significant number of online avenues of investigation.

The National Archives at Kew held the Operations Record Book for 74 Squadron and that provided a number of unique and significant documents about the pilot in question -Sergeant Rex White. More documents from the RAF historical records helped to complete the picture of what happened, and how the cufflink came to be in a farmer’s field.

Another file at the National Archives also held vital information. This was a file from the World War II Air Ministry Casualty Branch and was only permitted to be opened for public viewing on June 30, 2017. The file description is:

Having identified who the pilot was, the next step was to find out if he had any relatives – who would be his next-of-kin?

A relative of Sergeant White was successfully traced and it transpires that the Royal Air Force line in his family continued. His relative, a nephew, is Air Commodore Barry Dickens, RAF, a retired gentleman with a highly distinguished career. 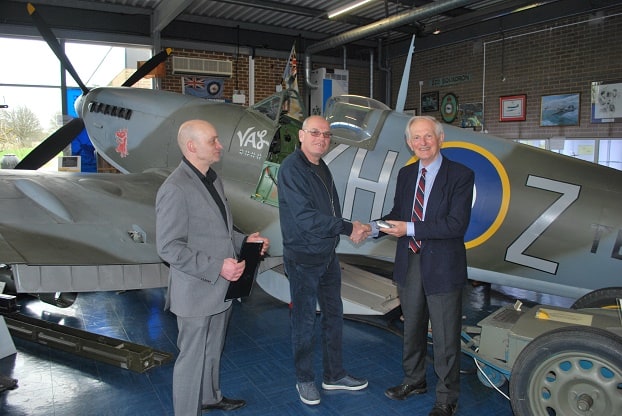 The cufflink, in a presentation case, was given by Trevor Benson to Air Commodore Barry Dickens who warmly accepted it on behalf of his family.

John also presented Air Commodore Dickens with a detailed booklet which he had produced which included all of the documents about Sergeant Rex White and all of the research that had been conducted.

The story of Sergeant Rex White

Rex White was a member of 74 Squadron.  The squadron was equipped with the iconic Supermarine Spitfire and was based at RAF Hornchurch in Essex.  One of Rex’s fellow pilots on 74 Squadron was Flight Lieutenant A.G. Malan, one of the most famous fighter pilots of the Battle of Britain – known as “Sailor Malan”.  The battle of Britain was to ‘officially’ start a week after Rex White’s death.

Sergeant (Pilot) John “Rex” White joined 74 Squadron on June 24, 1940, being posted in from the Operational Training Unit at RAF Aston Down, Gloucestershire. In the short period between his arrival on June 24 and his death July 3, Sergeant White only flew about “five hours on Spits” . Using the National Archives file for 74 Squadron, his service with the Squadron can be very briefly summarised as follows:

June 26 – Local flying to give new pilots familiarity with their local area, recognising landmarks and suchlike.

The entry on July 3 was the last for Rex White.  This is the day that Rex was killed whilst flying Spitfire K9928.  The flight started as an ‘Air Drill flight’ with two other Spitfires, but before they landed they were called by radio and at 1.25pm the section of three Spitfires was diverted to patrol the Canterbury area due to a possible incoming German raid. They were then sent to Manston where there were reports of an enemy aircraft in that area at approximately 5,000 feet.

After taking part in training flights (including those notorious ‘Fighting Area Attacks’ that were to be responsible for the deaths of so many good pilots in the upcoming months) the training was over and Sergeant White took part in his first, and last, operational flight.

The weather in Kent was stormy and the skies above Manston had large dark clouds. The three Spitfires of “Red Section” flew in “search formation” to the south of Manston and then, as part of their search pattern, flew north.

When they were north-west of Manston they were faced with two massive, dark, deep, clouds and Pilot Officer Stevenson took the three aircraft between two of these large dense clouds at about 6,000 feet.

They flew through a gap of thinner cloud. When they came out the other side into clear air “Red Three” wasn’t with them.  His aircraft was hurtling towards the ground and crashed in flames in “The Shallows.”

It is believed that Spitfire K9928 was struck by lightning causing catastrophic and terminal damage and this led to the death of the pilot, Sergeant Rex White.

The wreckage of Spitfire K9928 was examined on site, and then excavated and removed by No. 49 Maintenance Unit of the Royal Air Force. In cases such as this, all major components are likely to have been recovered and removed, but many smaller fragments would have remained behind and been distributed far from the actual site by ploughing. The aircraft was officially struck off charge at the end of the month.

The crash site was cleared as much as possible and a week later came the Battle of Britain.

The field where Rex White crashed in his Spitfire returned to arable farming and has been ploughed and planted, year after year – and is still in the same farming family. Between July 1940 and now, that is how the crash site remained, only disturbed by the annual plough until Trevor Benson made his discovery.

“Red One” was Pilot Officer Stevenson – his full name was Peter Charles Fasken Stevenson and he was to become a Flight Lieutenant with the award of a D.F.C.   He was in combat throughout the Battle of Britain and on one occasion launched a solo attack on twelve Bf109s – he got one but their numbers were too superior and he ended up in the Channel to be rescued by a Motor Torpedo Boat.  Sadly, on February 13, 1943 he was to lose his life on a fighter sweep over the Boulogne area.

“Red Two” was Pilot Officer Hastings – his full name was Douglas Hastings and he too fought during the Battle of Britain.  He was to lose his life right at the very end of this conflict, but not in combat with the Luftwaffe.  He died after a collision with another RAF Spitfire “while practicing dogfighting” over Gillingham, Suffolk.

With thanks to John Vaughan, Noel Craggs and the South East History Boards Forum