A free exhibition of installations and sculptures by Margate artist Davina Kemble is currently on show in Cliftonville as part of the POW! Festival.

On The Face Of It is response to control, confinement, ageism, power and privilege and a testament to emPOWerment.

It is open this weekend at Northdown Studios in Cliftonville Avenue from noon until 6pm both days. 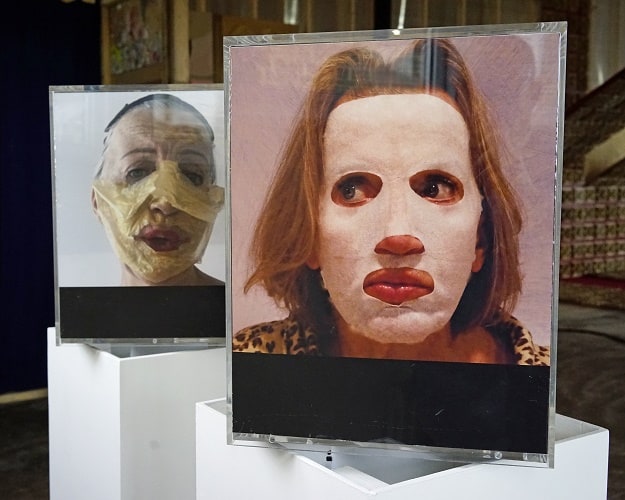 The left cube reflects on social masks, designed to hide inner feelings. These easily fail when the eyes and mouth reveal the truth.  The right cube reflects on mortality through the medium of ‘The Selfie’ and stances adopted in order to stave off the inevitable.

From 1977 to 1980 Davina studied Mime at the City Lit, London. During her training she became intrigued by the Commedia dell’arte masked characters that in turn led her to study at the Jacques Lacoq School in Paris. Here she took the course ‘Du Clown au Bouffon’, one of the inspirations for this show.

Further studies at Chippenham Technical College in the 1990s led to a successful career as a bespoke furniture maker.

In 2013 Davina obtained a first class honours degree in Applied Art and Design from Bath Spa University. During this period she also studied wire and paper modelling under Peter Rush, working on the Nativity scene in Salisbury Cathedral and the Praying Mantis of the 2000 Paralympics opening ceremony.

In 2014 Davina received a Masters degree in Fine Art from Bath Spa University.