Dalby Square, Arthur and Dalby Roads were designated as a Conservation Area in July 2010 – the first part of the historic area of Cliftonville West Ward to be so recognised. The community and Thanet District Council have used Dalby Square’s new Conservation Area status as a ‘springboard’ for the reinvigoration of the ward, an area which was almost entirely built in the 19th century.

The Square comprises of groups of very large terraced houses fronting a central garden. All properties were built in the 1870s, with the slightly smaller terraced houses in Arthur and Dalby Roads built in the 1880s and 90s. All the buildings have elaborate decorative detailing and basement areas bounded by railings. The houses are similar to, and broadly contemporary with, those of the Notting Hill area of London.

Dalby Square is in LSOA 001 Thanet, the fourth most deprived local authority sub-ward in England out of 34,844 such areas, where adult male life expectancy is 18 years lower than the county’s least deprived ward. In the past this sort of statistic has attracted adverse publicity to the Square.

The Conservation Area is made up of 85% privately rented properties, mostly owned by absentee landlords and it has a highly transient population: 60% of the residents stay in area for less than a year.

The initial conservation designation of the Square has led to a further six nearby designations so that now over 50% of Cliftonville West is now a Conservation Area. Conservation areas can attract national improvement funding.

A £2.8m Townscape Heritage Initiative (THI) grant, co-funded by the council and Heritage Lottery Fund, has supported 50 individual grants within the Dalby Square conservation area. The scheme has supported building façade restorations, replacing UPVC windows with double glazed timber windows, reinstating railings and boundary walls, improving street lighting and replanting the gardens. The car park at the north end of the Square, created in 1958, has been returned to its original form as a garden. The initiative has also supported community groups and is working towards a resolution of the area’s waste disposal issues.

Working with the Technology Strategy Board, Thanet District Council and Kent School of Architecture studied a 500m2 house in the Square to see how it would perform environmentally in the year 2080. It was discovered that, due to their massive construction and high volume rooms, the buildings of the Square performed much better in a hot environment than 20th century housing. Markedly, the open staircase which runs between basement and the top floor, acts as a ‘ventilation stack’, passively-cooling the house in the summer. 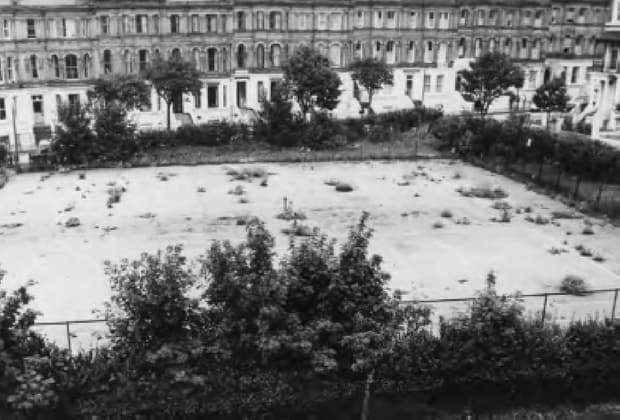 The recommendations of the climate change project have been built into one of the refurbished 1870 terraced houses. Additionally, this house has been adapted to accommodate a multi-generational family without the sub-division of the staircase or the provision of fire doors. The environmental performance of the house, and the way the multi-generational family occupy it, are being monitored and will be the subject of a climate change adaptation toolkit which will be applicable to historic seaside towns throughout the country.

The purpose of the initiative is to prove that the Victorian buildings in Dalby Square are not only beautiful objects in themselves, they are also highly sustainable, adaptable to changing lifestyles and, with the minimum of maintenance, they will last indefinitely.

The Dalby Square Townscape Heritage Initiative Team are inviting residents within the Dalby Square Conservation Area to have their portrait professionally taken.