In 2014, a letter was published in the local press, alerting Westgate residents to the fact that the recreation ground in Lymington Road Westgate, adjacent to the allotments, was a memorial to the men of Westgate, who had died in the First World War and, as such, should be recognised and cherished.

A year later, after the Westgate-on-Sea Town Council was created, the Westgate-on-Sea Heritage Centre committee suggested that a memorial should be erected at the recreation ground to tell its story. In 2016 the Heritage Centre was awarded a generous grant from the Heritage Lottery Fund to help fund its ambitious programme to commemorate the centenary of the First World War, including the provision of a memorial.

When the First World War had ended in 1918, the question of suitable memorials arose throughout the country. In Westgate it was suggested that land should be bought as a “recreation ground for the young”. Money was raised by public subscription to buy 4½ acres of farm land on the south side of what is now Lymington Road from the owners of the Westgate-on-Sea Estate.

It was conveyed to the then Westgate-on-Sea Parish Council in October 1920, who turned it into a recreation ground, bordered by hedgerows. Elm trees were planted, football and cricket pitches laid out and swings erected. It was well-used.

In 2008 a group of enthusiastic local residents raised money to improve the play area. Later, a skate park was created. There was still nothing, however, to show that this land was special. 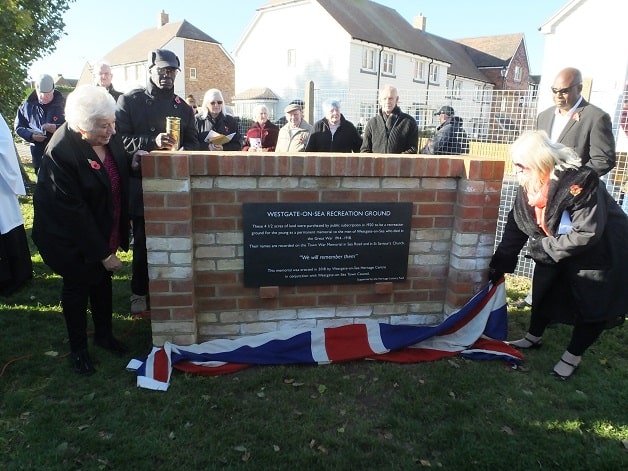 Early in 2018 the Heritage Centre committee set about remedying this with the agreement of the Town Council. Representatives from both organisations met at the recreation ground to decide where to site the memorial. The design chosen was a simple wall and plaque, inspired by one in the tiny North Essex village of Helions Bumpstead, where the recreation ground was also a war memorial. 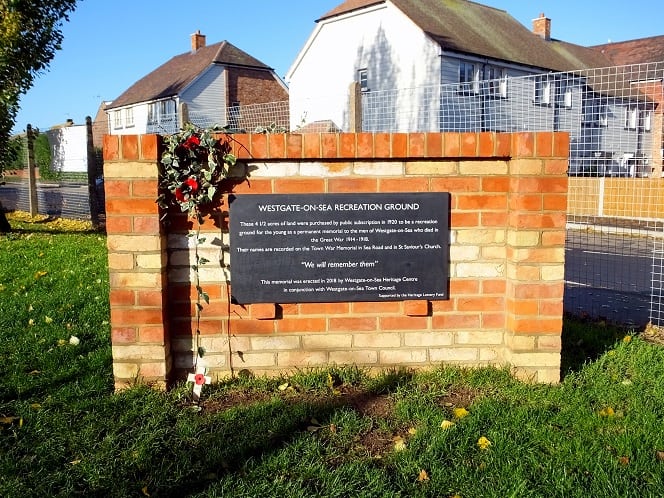 It was decided that the Westgate wall should echo many local buildings and be built of “yellow stock” brick decorated with bands of red brick. On it a plaque of Cornish slate, inscribed with the story of the recreation ground, would be fixed.

In October 2018 the wall was built by a local builder in a week when blessed with good weather. Then, although the rains had come down the following week, the sun shone in the afternoon of Friday 2nd November. A good crowd assembled, as First World War music floated out across the recreation ground, where children were playing. The wall, two metres wide and 1.07 metres high, was draped with the Union Flag, held down at the corners by First World War shell cases gleaming in the sun. 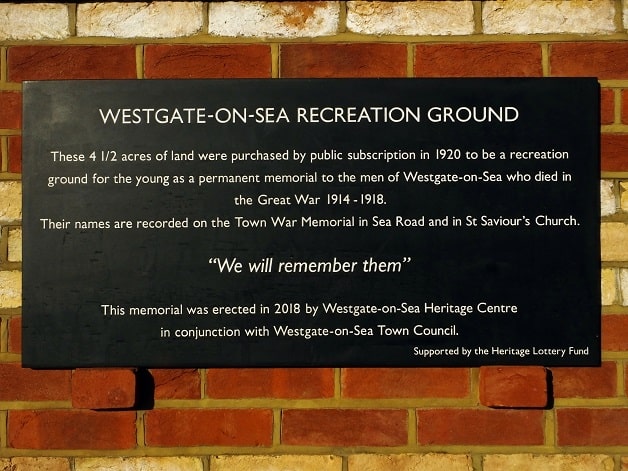 Dr Dawn Crouch, Founder of the Westgate Heritage Centre and Hon Freeman of Westgate-on-Sea, welcomed Sir Roger Gale M.P. and other invited guests from the Westgate community. Then the wall and plaque were unveiled by relatives of three of the eighty men named on the Westgate War Memorials in Sea Road and St Saviour’s Church, Sue Troke, great-niece of brothers, William and Frederick Pointer, and Jane Hammond, great-niece of Alfred Eede.

After the Revd Susan Wing, a retired army colonel, had dedicated the memorial, Sir Roger led the tribute to those who had died. Eighty names were read out by representatives of local organisations, who. included Cllr Martyn Pennington, Chairman of the Town Council.

The ceremony finished with the reading of the Exhortation from Binyon’s “To the Fallen”, the Last Post, Silence and Reveille and the singing of the National Anthem. The task was finished.