There were only two changes to the squad that had performed so well against Beckenham last week. Luke Tolley replaced Kamil Wiecaszek, who was unavailable, at tight head and Marius Thompson started at ten with Nick Herbert hurrying from morning work duties to join George Orton and David Lemon on the bench.

Wanderers kicked off and started well. Danny Clement and Stuart Plumridge carried strongly before Thanet were caught offside. Charlie Knight effected a turnover and Dan Hill’s strong tackle brought a knock on but the promising opening was halted when a penalty for not releasing set up Horsham near Thanet’s 22. Desperate defence resulted in another penalty and Brett Scott was shown a yellow card. Horsham drove over and Wanderers trailed 7-0 after ten minutes. 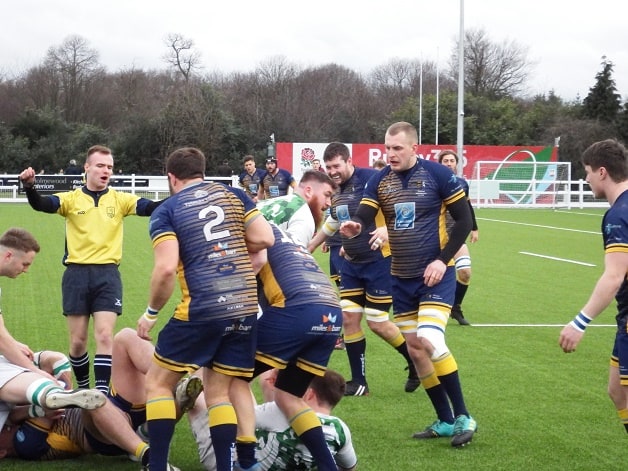 Three minutes later the hosts doubled their lead with a well crafted try from their own half that illustrated the speed possible on the artificial surface. It got worse for Wanderers as Tom Walton was given ten minutes in the sin bin for a high tackle near his own line. Today’s referee Billy Huntley awarded a penalty try to make Thanet’s deficit 21-0 with just a quarter of the match played. Wanderers defended well during the spells of playing a man short with Thompson choosing his options well. Plumridge’s powerful break was chopped down after making good metres. Reece Hougham and Knight on Wanderers wings had limited opportunity to display their speed against very close marking.

Restored to full strength Thanet enjoyed a good spell but Horsham’s defence was quick to close down Thanet’s attackers. Dan Hill had taken a heavy knock and was replaced by Herbert. Sam Taylor showed soccer skills but was recalled for a penalty to Wanderers. In injury time more good handling from Horsham brought another converted try to take them into half time with a try bonus point at 28-0. 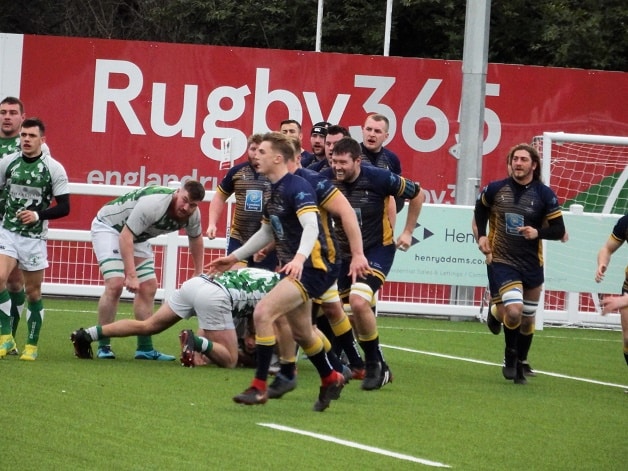 Danny Clement withdrew at half time having found the going tough on the artificial surface. The reshuffled pack saw Andy Letts move from No 8 to loose-head with Lemon on in the back row. Captain Adam Gaddes was in no mood to go down without a fight and his powerful carry set the tone for the opening period of the second half.

Handling looked more fluent as an attack flowed left and back right before the final pass, for a good try opportunity, went adrift. Tolley was prominent as Wanderers camped near the home try line. As Thanet again spun the ball right a Horsham player was judged to have deliberately knocked on and was shown yellow.  A prolonged series of pick and goes proved fruitless for Thanet before their attack was cleared. 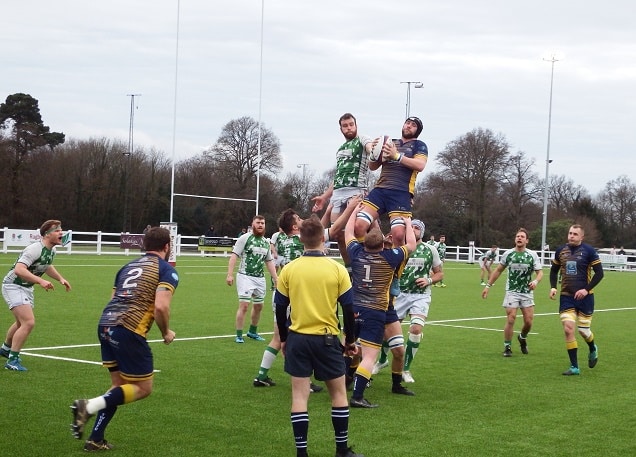 A bullocking carry marked the arrival from the bench of Orton replacing Gaddes in the second row.  Around the hour mark, Wanderers again built pressure close to the Horsham line and this time Arek Janeczko surfaced as the try scorer. Rolfe added the extras  for 28-7. Horsham soon hit back following more swift movement down the left touchline which led to try number five. More misery for Wanderers followed as an attempt to play from deep saw a well telegraphed pass grabbed by an opponent to run in their final try.

The Horsham kicker capped a good afternoon with his sixth conversion. Wanderers never give up and fought back well despite Hooker Neil Wakefield being forced off with an injured ankle. Gaddes with no recent front row experience returned to replace him up front. Walton kept probing trying to spark something and finally it was again Arek who jumped up after scoring his seventh try of the season for Thanet. Rolfe made it 42-14. Horsham’s winger was shown yellow and Wanderers touch judge, Ron Connell, was accidentally knocked over but there wasn’t much to excite in the closing minutes. A minor scuffle seemed to lead to an early close with the due penalty not taken.

This was a deserved win for Horsham.  Many in the Thanet camp felt that this was the best team performance against them this season. Wanderers didn’t come to terms with the unfamiliar playing surface and suffered a raft of minor injuries that caused them problems.

There were quality performances from the back row with flankers Brett Scott and Sam Taylor outstanding in their roles and Letts in the many parts he played including throwing in to the line-out.

Arek whose play has improved considerably this season was Head Coach Mike Pond’s choice as Man of the Match after another excellent performance. The popular Polish lock forward is now second in the try table behind Tom Walton who has scored nine.

No game for Wanderers next Saturday, they return at home against Gravesend on January 26,. 2pm kick off.