Eleven Hooden Horses have gathered at Wantsum Brewery ‘Tap Room’ in St Nicholas-at-Wade to celebrate the publication of the first major book on the topic for more than a century.

Hoodening is an ancient calendar custom, which has been performed in east Kent for some 200 years. The first reference in print was in 1735, but there are indications that similar practices were part of pre-Christian pagan life one thousand years earlier.

Hoodeners were primarily agricultural labourers, often working in ploughing teams. They used to visit pubs and the houses of large landowners during the fallow season of winter, to renew social bonds and ask for “largesse”, in other words beer and cake, or sometimes money. They would entertain their hosts with general horseplay, and sometimes songs. 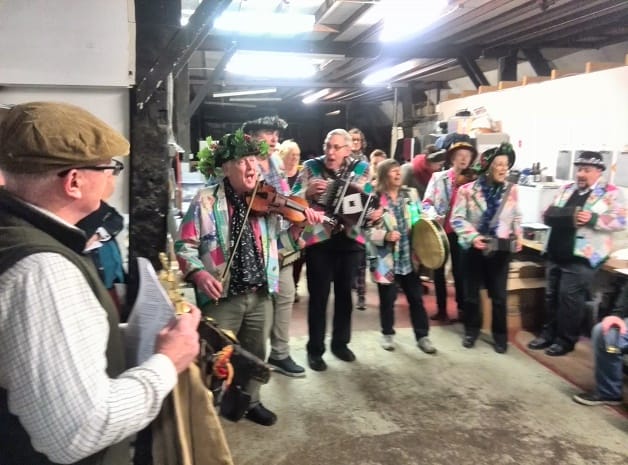 What makes Hoodeners unique is their use of a Hooden Horse – a wooden horse’s head, on a pole, with hessian sacking under which the ‘animator’ would hide to impersonate a real horse. Nowadays the Hoodeners will generally perform a play, involving some form of ‘death and resurrection’ theme, and collect money for charity instead of themselves.

The oldest group, the St Nicholas-at-Wade with Sarre Hoodeners, write a new play (and new songs) every year, full of humorous topical references both to the local area and to national or international events. One of their members has been playing his part of Molly, a man-woman, for 50 years. The group has appeared in numerous books and magazines throughout the world, including Vogue.

Vaguely similar traditions can be found in other parts of the United Kingdom in the run-up to Christmas, or the Winter Solstice, and New Year. Wales has the Mari Lwyd, using a real horse’s skull,  and many regions have mummers’ plays, often with St George and the Dragon, or morris dancing.

Until recently, the only authoritative reference on Hoodening was “The Hooden Horse” by Percy Maylam, published more than a century ago in 1909.

Maylam said the custom was in decline, and it had been thought that Hoodeners had stopped making their rounds at the time of the First World War, but the new book “Discordant Comicals – The Hooden Horse of East Kent” by George Frampton (published by Ozaru Books, http://ozaru.net/ozarubooks, ISBN 978-0-9931587-7-3), that was launched at this year’s event, dispels that myth, demonstrating that numerous performances were recorded in different parts of East Kent between 1909 and 1966, the so-called “Revival”. 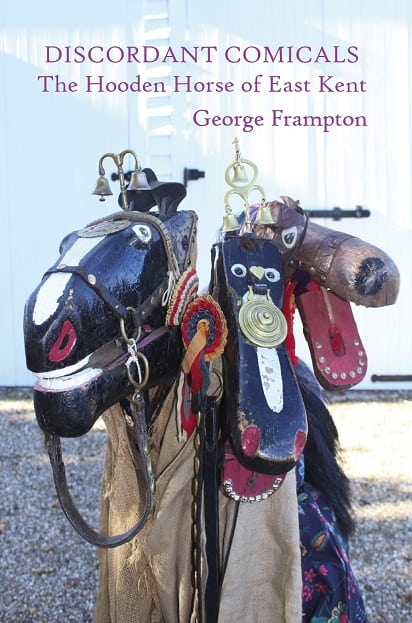 The team in St Nicholas-at-Wade inherited their main horse from the earlier Hoodeners, and some members are in fact direct descendants. Other horses and teams present at the event came from Deal, Whitstable, Dover, Canterbury, and even further afield – one horse made a round trip of over 200 miles, coming from Farnborough in Hampshire, although as it is now ‘stabled’ outside East Kent, it is used for mumming rather than strict hoodening.

The various performers showed their respective skills: some with a play in rhyming couplets, specially written for the day, others with plays based on soul caking scripts, and still others offering folk songs, or more conventional songs known to have been sung by Hoodeners a century back. Beer drinking is also an integral part of the custom, and the celebration was held inside the tap room of the village’s popular microbrewery, Wantsum Brewery. 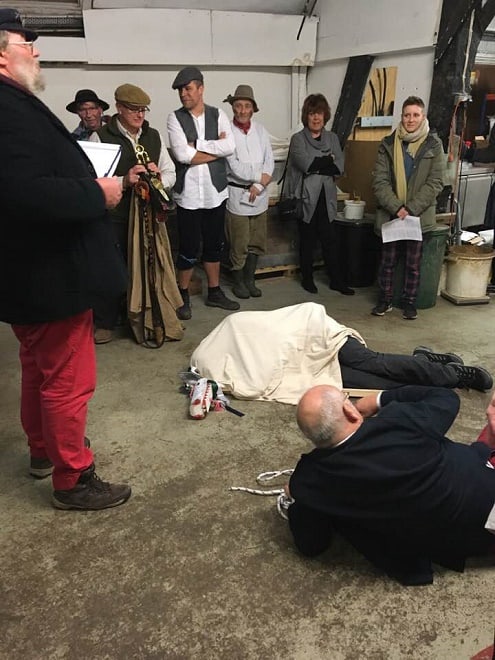 The book’s publisher Ozaru Books is based in St Nicholas-at-Wade, and has issued several books focused on the local area. Its author, George Frampton, said he effectively “stalked” various groups of Hoodeners for over a decade to complete his work, as well as pursuing detailed studies in the archives of local libraries. He is well known as an expert in the folk song tradition, leading sessions at the Sidmouth Folk Festival, and has published several other works on lesser known English folk customs.