A Ramsgate café boss has spoken out about the nightmare of drunks, fights and criminal damage in Harbour Street on Thursday nights,

Mark Kenneally is joint owner of The Daily Grind with Julie Young and his partner Lauren Ryan is manager.

They took over the popular café seven weeks ago but have had their windows smashed twice in that time, most recently in the early hours of Friday (December 7).

Mark, 35, said: “There has been so much trouble, I have been on the phone to police about 13 and 14-year-olds jumping along the roof of the bank, you get people screaming and fighting on Thirsty Thursdays and then windows get broken.

“I called the police about 13 and 14-year-olds jumping across the bank roof and they said they had no-one in the area.

“Then our window was smashed through and on the CCTV you can see the guy in our café covered in blood.”

The latest vandalism will cost The Daily Grind £1,000 just to repair the glass and the frame. The sign-writing will need to be replaced on top of that.

A plan put shutters up to protect the premises has been vetoed until planning permission is applied for and granted.

Mark, who with partner Lauren has three children, said the trouble is close to driving people out of business. He said: “People in the street have had enough. It is all about the Thirsty Thursdays, people even come down once a month for the £1 drinks because other areas have stopped doing it but not Ramsgate.

“We are working hard and then this happens and there is no help. We haven’t even had an update from the police.”

Mark, who was a head chef at various Thanet venues before taking on the café, says there needs to be more police action to halt the trouble. 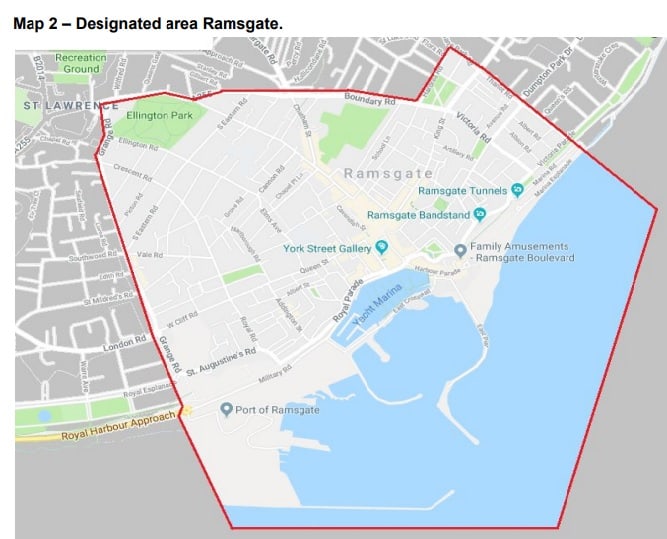 Harbour Street is in a Public Space Protection Order (PSPO) area to combat antisocial behaviour after hundreds of complaints and enforcement action against people spitting, urinating and defecating in public areas as well as jumping between buildings.

The order covers Central Harbour and parts of Eastcliff in Ramsgate. A separate order covers Margate Central and Cliftonville West. The orders give additional powers to police and council officers to combat a range of antisocial behaviour.

Several dispersal orders were also put in place in the Ramsgate town area this year and in 2017 to give police officers powers to disperse groups of two people or more and order them to leave the area without returning for up to 24 hours.

Thanet District Council’s Community Safety Team dealt with 239 complaints of ASB within the designated areas and took enforcement action for the misuse of public space on 23 occasions.

A Kent Police spokesman confirmed an arrest had been made in connection with the damage to The Daily Grind window.

A spokesman said: “Police were called to Harbour Street, Ramsgate at 1.22am on Friday, December 7, following a report a shop window had been smashed.
“A man was arrested and Karl Brock, 25-years-old, of Linksfield Road, Westgate On Sea, was charged with criminal damage, assault on police and a public order offence. He will appear before Margate Magistrate’s on January 10.”