An informative peep into the world of how illegal drug smuggling is tackled has been demonstrated by the UK Border Force to pupils at Upton Junior School in Broadstairs.

The front line team and sniffer dogs showed children first-hand how they search for illegal substances in commonplace objects and areas where they have been concealed, such as a cable drum and a hollowed out book.

Spaniels Bella and Woody and their handlers visited the special assembly which marked then conclusion of the Year 5 topic that highlighted how all medicines are drugs but not all drugs are medicines. 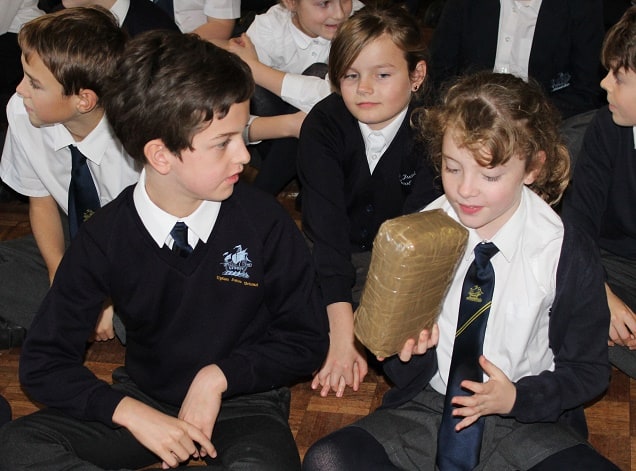 The dogs also accurately identified which teacher – Deputy Head of School Dave Walker – in a line-up of ‘suspects’ was concealing a dummy drug sample.

Nolan Kent, senior manager with the UK Border Force, chatted with pupils and illustrated his talk with a slide show and film that looked at Class A, B and C drugs and the effects they have on users.

The presentation identified the way that some drug smugglers hide narcotics in their body, and how drugs are concealed on a variety of transport, such as boats and ships coming into the UK. 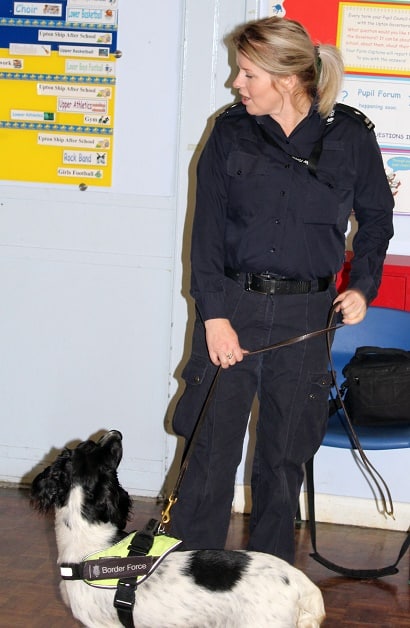 He discussed the physical and mental dangers of illegal drug taking, and added: “Addiction takes people down a dark and nasty road.”

During their topic work pupils have examined the reasons why people take drugs and the effects of drugs on the body. They learned about which drugs are legal and which are illegal, which drugs help and which drugs harm. They also looked at the work of the Police and UK Border Force to ensure that illegal drugs don’t make their way into the country.

Mr Walker said: “Children – and indeed staff around the hall – were spellbound throughout the presentation. It was an incredible opportunity to learn about something that we would otherwise never really see and understand the important work that goes on in Border Control.

“We are very grateful to Mr Kent and his team for giving up their time to give us a fascinating up-close insight into their work and help us with our learning.”